Tommy Tornado and The Clerks – Back On Track 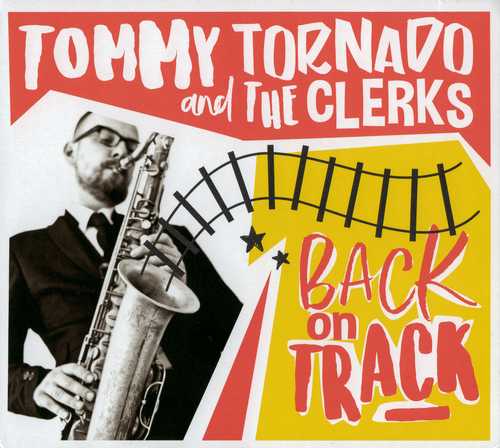 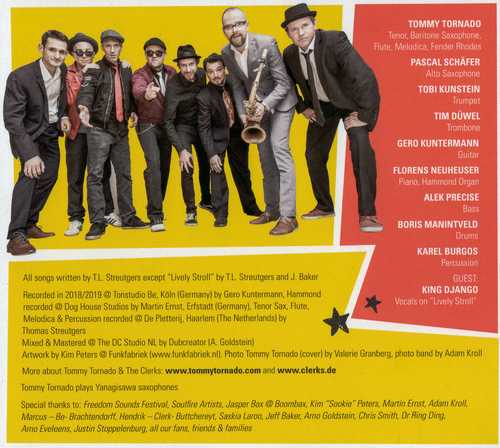 Tommy Tornado and The Clerks – Back On Track

Tommy Tornado (Thomas Streutgers NL) the ska-reggae-jazz-swing-funk-soul saxophonist, according to his own label, is coming on strong with this 3rd solo album after Sunrise (2009) and Cool Down (2011). After winning the Big Boss Jazz Award in 1997 at the age of 17 he started touring with Dutch rocksteady/reggae formation Rude Rich and the Highnotes. They backed up artists like Rico Rodriguez, Derrick Morgan and U-Brown. He is featured since then on many recordings and dubplates for countless artists and soundsystem dubplates like Slimmah Sound, King Shiloh and the mixmaster of this album Dubcreator. On this album Tommy Tornado plays Tenor and Barritone saxophone, Flute, Melodica and Fender Rhodes (keys).

For this set Tommy teams up with the German (Cologne) reggae band The Clerks. This 8 piece tour-de-force ska collective consists of Pascal Schafer (alt sax), Tobi Kunstein (trumpet), Tim Duwel (trombone), Gero Kunterman (guitar) Florens Neuheuser (Keys), Alek Precise (bass), Boris Manintveld (drums) and Karel Burgos (percussion). The Clerks started in 2000 and have recorded many albums and are heavily influenced by the ska and rocksteady of the late 1960s. In 2016 they recorded the album The Night I Came Home and toured with “Original South London Rude Boy” Arthur Kay.

Tommy Tornado leads the way on all tracks and in this dub-flavored opening track. A horns filled rocksteady track where he can show his craftsmanship. The riddim track is steady and is a beautiful starter to all what comes next. Dubcreator delivers a strong mix where every instrument gets the space that it deserves.

The title of this 2nd track does not just to where we are going….Uphill we go. An echoed riddimshot starts things up. The horns are firm and fierce. The riddim is playful with all sort of in between parts towards at first a great trombone solo. The baritone sax together with the bass is glueing things together here. Lots of solo parts from all different horns. Dubcreator dubs things up fine here.

Uptempo steppers we go with Bari Bari. A keyboard (fender Rhodes) driven song what brings to mind the golden years of Jackie Mittoo. The horns are everywhere again and I especially like the riddim of this one. Classic reggae music with a chopping guitar and a very nice changing of chords. (yes your reviewer here is a music maker himself :). I love this track.

In uptempo spheres we stay with The Tube. This is a joyful track, the piano underneath is great. It shuffles along and along. A very subtle sax is telling the tale here. The lead guitar solo spices things up and all comes together by a great mix of Dubcreator.

The A side ends with a ska beat track with a guest vocal by King Django. “This is not a Tango this is Tommy Tornado, to slice up your Mango”. This one surely makes you get up and dance. Very old school inspired ska/rocksteady and humorous like it often was lyrically. Music before the Roots Rastas took over with biblically, Beat down Babylon songs. Late 1960s the music was about going to the dance with your girl and have a good time. Good vibes.

On the B side we take things off with a bouncy track where in the center of things the trombone takes lead. Dubcreator gives it all its space with first only bass and keys underneath. The Tenor sax of Tommy sounds great as always. Showing off his craftsmanship for sure as also does Dubcreator who delivers a sublime work of mixing on this whole album.

This could also be a Roots Radics track like in the mid 1990s when they backed up acts like Israel Vibration. The lead guitar is very fine in the back and also is the keyboard/piano. It all is blended very well where the horns can fly allover. Tommy Tornado is doing also flute and melodica here. His namesake Tommy McCook would have loved this track I am for sure.

Maybe Tommy called this track Dearest because it is his? The guitar picking alongside the bass is tight. Solid driven music and the most jazz influenced track at some points. The horns are in a good mood and a bit spooky are the chords.

The album ends with three Dubcreator dubs of The Tube, The Flame and Bari Bari. Dubcreator is a longtime Dutch dub producer who worked with many great like Earl Sixteen, Danny Red, King Shiloh, Slimmah Sound, Roots Encounter, Selassie I Soundz and many more.

A VERY STRONG HORNS/DUB FILLED ALBUM
Love this album! I played bass myself in a band with lots of horns in the lineup and I know from experience that it can take a lot and time and effort to record all layers. It has to be tight and it has to be good. The overall sound is great and crisp. It must have taken a lot of thought and time to produce this. A great piece of work. 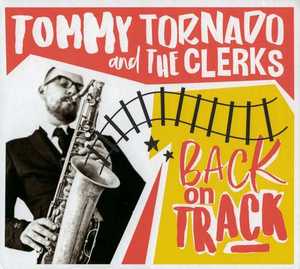