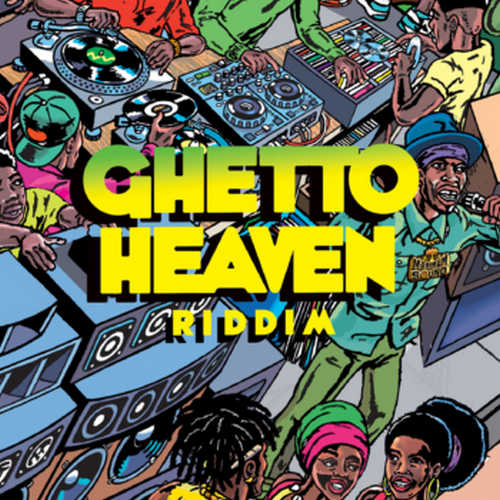 Esteemed producer Frenchie from the mighty Maximum Sound imprint hits once again with the “Ghetto Heaven” riddim. Since the launch of the Maximum Sound label back in 1993, the UK-based frenchman and his independent dancehall and reggae label have built a good reputation as their almost all releases were stamped with quality all over. Whether a Frenchie produced project goes into dancehall territory or focuses on the reggae side of Jamaica’s popular music, every new release simply follows the line of quality that was created in the past 26 years. And thus true fans of the label, and there must be many, know they won’t be disappointed when a new project hits the street.

When it comes to juggling projects, Frenchie and his label have definitely done great things – in particular thinking of riddims such as “Jah Powers”, “Praise Jahoviah”, “Ashanti Warrior”,“Ghetto State Of Mind”, “Skateland Killer”, “Space Invaders”, “Most Royal”, “World Jam” and “Black Board”, which are only nine of the more than sixty riddims that have been released so far. All of these and probably a dozen more are still worth hearing.

The new original “Ghetto Heaven Riddim” is one for the reggae fans, who will surely fulljoy listening to this well-arranged and utterly lovely sounding backdrop. Frenchie has linked together a varied roster of vocalists and they’ve really done well for themselves! Included are label favourites, Christopher Martin and Mr. Vegas, but also new talents like Naomi Cowan and Jah Lil and veterans such as Marcia Griffiths and sax player Dean Fraser. Eight vocal cuts, an instrumental and a dubbed up version of the riddim are included here. Each and every track of this collection is really fine to listen to, but when it comes to pointing out the ones that instantly have great appeal there are a few that really deserve to be mentioned. These are Duane Stephenson’s “Put Down The Knife”, “Don’t Say Nuttin” by The Kemist & Marcia Griffiths, Mr. Vegas’ “No More One Draw”, and Ginjah’s “Ghetto Life”.

Conclusion Another quality project from esteemed producer Frenchie and his Maximum Sound label.