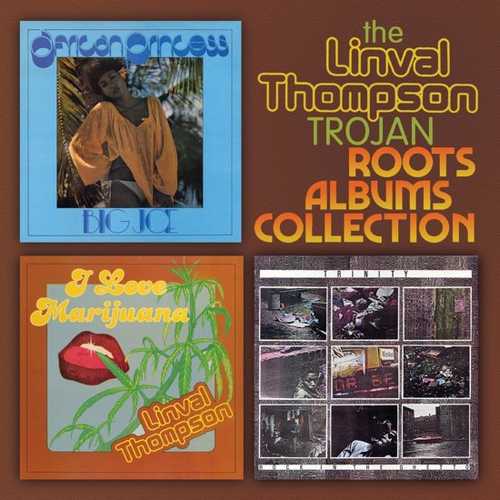 During the late 1970s Jamaica’s popular music was experiencing what many consider to be its last golden era. King Tubby was in full swing, Channel One’s house band the Revolutionaries were at their peak and talented producers such as Linval Thompson were taking full advantage of the availability of such considerable talent as Barry Brown, Cornell Campbell, Ranking Dread, Prince Mohammed, Big Joe, Sammy Dread, Pat Kelly, Wayne Wade, Trinity, Horace Martin, and Freddie McKay. Some of the albums he recorded with artists like Freddie McKay, Horace Martin, and Wayne Wade have never been released.

As a singer Linval Thompson scored a huge hit in 1975 for Bunny ‘Striker’ Lee with his debut single “Don’t Cut Off Your Dreadlocks”, which then was followed by singles like “Long Long Dreadlocks”, “Jah Jah The Conqueror”, and “Natty Dread Is The Greatest”. Although the singer’s place in the ace producer’s hit making stable was now assured, he cut another roots scorcher for Tony Welch’s Socialist Roots sound system and record label in 1977 called “Train To Zion”. By this time he was already regarded as one of Jamaica’s all-round talents. Linval Thompson had now began to venture into production work and had started to release records on his own Thompson Sound imprint. In 1978 he released his next massive hit “I Love Marijuana” along with a self-produced full-length album of his own that got the same title. He then licensed his “I Love Marijuana” set plus it dub version “Negrea Love Dub” and the deejay albums he had produced with Big Joe and Trinity to Trojan Records for release in the UK. Now these three albums plus no less than 10 bonus tracks – first issued by Trojan’s Attack subsidiary – are gathered on this highly collectable dbl cd set.

By 1978, Linval Thompson was at the height of his vocal powers. Following the success of his roots piece, “I Love Marijuana”, one of the all-time anthems saluting the wisdom weed which he recorded at Channel One, was Linval Thompson’s best-selling album of the same name. The vinyl platter featured some of the most solid material of his career. What helped was the fact that he had some real strong songs in mind for his sophomore album, the Revolutionaries backing him up and the skilled mixing engineer at King Tubby’s Studio – either Osbourne ‘King Tubby’ Ruddock himself, Philip Smart, or Prince Jammy – to whom the recordings were taken for remixing. The end result is a landmark LP of late-’70s roots reggae that is still a real pleasure to listen to. Highlights are the roots anthems “I Love Marijuana”, which comes across a deadly riddim, “Dread Are The Controller”, “Don’t Push Your Brother”, “Not Follow Fashion” and the lovers tune “Just Another Girl”, a rendition of Ken Boothe’s Studio One classic from 1969. The stripped down version of “I Love Marijuana” titled “Jamaican Calley (Version)” is a great closer of the Linval Thompson set.

Foundation deejay Big Joe, real name Joe Spalding, began his recording career in the early 1970s for producers such as Lloyd ‘Matador’ Daley, Harry Mudie, Leonard ‘Santic’ Chin and Coxsone Dodd, for whom he at the time made his best records. In 1976, Bunny Lee issued Big Joe’s first LP titled “Keep Rocking And Swinging” (aka “Natty Dread A Winner”), which in 1977 was followed by a second Bunny Lee produced album – “At The Control”. Big Joe then teamed up with Linval Thompson, which led to the release of the highly recommended “African Princess” in 1978, being the deejay’s third album release in less than two years. Big Joe’s soulful voice and laidback deejay style comes to full expression on the 10 tracks from his “African Princess” set. The Big Joe part starts off with the album’s title track and features such ear-catching tunes, which are also the highlights, as “Don’t Fuss Or Fight”, the deejay version to Linval Thompson’s “Cheating Girl” and “Smoke Marijuana”, the counteraction to “I Love Marijuana”, “Merry Go Round”, “Judy”, and “Big Disgrace”.

Rock In The Ghetto

Trinity (born Wade Everald Brammer) recorded his first single for producer Jo Jo Hookim of Channel One in 1976, although Derrick Harriott claims that he recorded the deejay’s very first number called “Owner Fi Di Yard” for him. However it was for producer Joe Gibbs that Trinity made his breakthrough in 1977 with the hit single “Three Piece Suit”. Hard on the heels of this very successful single came a spate of other popular numbers and his first-ever LP, predictably under the title “Three Piece Suit”. During the late ’70s and early ’80s some ten LP’s came out on regular intervals and most of them sold considerably well, which was undeniable proof of Trinity’s unwavering popularity in those days. One of those albums was the 1979 released “Rock In The Ghetto”, which sees Trinity at his toasting best with his updated Big Youth deejaying style. Add the fact that this album has all the great lyrics that Trinity was known for plus riddims that sound really good to the ears, and it’s no surprise that this is a very good collection of deejay tunes – with sometimes dashes of vocal fragments included in the mix. In particular worthwhile to go on repeat are “Easy Does It”, “Life Is Not Easy”, “Rock In The Ghetto”, and “Freedom Style”.

Trinity was particularly popular for his 12″ singles (referred to as discomixes), so the inclusion of two Trinity discomixes as bonus tracks isn’t really surprising. Both “Follow My Heart” and “Pope Paul Dead & Gone” are also included on the “Rock In The Ghetto” album, but it’s definitely far better to have them in 12″ Version. Especially “Pope Paul Dead & Gone” is a killer (sic). On disc 2 you’ll find even more bonus tracks and all of them are on classic levels and worth hearing over and over again. “Mr. C.I.D.” is a killer 12″ roots piece wrongly credited to Barry Brown as this tune actually has been recorded by Bunny Lie Lie. It’s followed by some of the heaviest Scientist dubs ever, “King Tubby’s Rockers”, which was included on the platter’s flipside. Listen next to the huge “There’s A Song” to hear Pat Kelly singing at his very best. And then Scientist, who had become a good friend of the singer/engineer, comes up with a great dub version – “Lover’s Style”. “Here With Me”, sung with that wonderfully sweet vocal style, captures Linval Thompson in a romantic mood. The lovely vocal cut as well as its dub version titled “Come On Baby, Dub Style” are a great joy to listen to and the same goes for the last two tracks. “Pop No Style” comes across the same riddim as used for Wayne Wade’s “Tell Me What Going On”, while the brilliant Scientist delivers another awesome dub piece, “Second Hand Girl”. For these bonus tracks alone this dbl cd is worth picking up!

Conclusion This dbl cd is really and truly good value for money.