Various – Down In Jamaica: 40 Years of VP Records 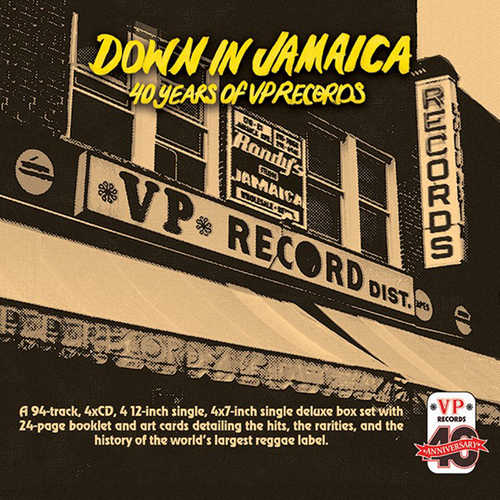 Various – Down In Jamaica: 40 Years of VP Records

On the release front, the world’s largest reggae label, distributor and manifacturer VP Records celebrates being 40 years in the business with “Down In Jamaica: 40 Years of VP Records”, a deluxe multi-format limited edition (2,000 run) box set, which contains ninety-four vocal tracks and five dub mixes from 101 Greensleeves and VP artists. The music, selected from about 25,000 recordings, is spread over four CDs, four 7″ singles, and four 12″ singles and furthermore includes a large-sized 24-page full colour booklet (in 12inch size) and six exclusive art cards featuring the personal histories of Dennis Brown, Sean Paul and several others.

Founded in the late 1970s by Vincent ‘Randy’ Chin and Patricia Chin from their downtown Kingston store, Randy’s Records quickly became the epicentre of the booming Jamaican music scene. After moving to New York in 1977 to escape civil unrest, Randy’s evolved into VP Records as it is known today. Named after its owners, the label quickly became the de-facto home of Afro-Caribbean music in the US, cementing its place in the international mainstream. In 2008, VP Records acquired the seminal British reggae label Greensleeves making it the largest collection of reggae songs in the world. Founded in 1975 as record store in Ealing, Greensleeves mirrored both the origins and success of VP Records, achieving legendary status with its hugely popular Discomix series, sampler LPs and many hits.

One look at the roster of artists not only tells you that almost every big name and hitmaker in reggae and dancehall music is represented on this collection, but also indicates the important role VP Records (and also Greensleeves) has played during the past 4 decades. Most of the tracks included on the four CDs will sound very familiar to the ears of any true fan of Jamaica’s popular and even those who only occassionally listen to reggae en dancehall music will instantly recognize some of them – the ones that reached a high spot on the pop charts. When going through the tracklists of the 4 CDs, the long-time reggae fan will surely approve the inclusion of classic tunes by reggae icons such as Gregory Isaacs, Dennis Brown, Michael Prophet, Johnny Osbourne, Yellowman, Barrington Levy, Frankie Paul, Cocoa Tea, Garnet Silk, and Yellowman to name only ten. Not that they don’t have them in their collection, but more because it honours artists who have given them so much great music. Of course, younger fans will be more familiar with the tunes on CD #4 or maybe also on CD #3, but here they are given the opportunity to check the music from earlier decades, which is a good thing. It’s obvious that each disc has more highlights than you can shake a stick at.

Enough said about the CDs that are included in this box set. Of far more interest, especially for the avid fan, is the inclusion of 7″ & 12″ vinyl singles, bringing back a few rare titles long out of print. Although all pressing plants in Jamaica are (sadly) closed nowadays, there’s no arguing that the 7″ singles format was the dominant vehicle for Jamaican music from its inception. The compiler (Carter van Pelt) has managed to dig up some truly gorgeous tunes from the past, but inexplicably added the 2015 smash hit “Fade Away” by Romain Virgo & Agent Sasco and its instrumental version. It’s indeed a great conscious tune, but not really an appropriate choice to put it amidst of the real classics.

The Congos’ anthemic piece “Fisher Man” (aka “Row Fisherman”), here paired with the glorious “Fisher Man (Version)” from the then unbeatable Upsetters, is one of the vocal group’s most famous songs and an absolute classic within the large field of vocal reggae. Oswald “Ossie” Hibbert produced Freddie McKay’s massive lovers piece “La La By Woman”, a 1978 scorcher with a great horn section to fulljoy. Wicked tune fi sure and so is the dub version with the Aggrovators playing the militant Steppers riddim in fine style. Linval Thompson delivered a string of classic hits in the mid-’70s including the Bunny “Striker” Lee produced “Don’t Trouble Trouble”, which comes across a ‘flying cymbals’ riddim laid by the Revolutionaries. Not really rare or scarce, but rightfully included here.

The first platter brings the listener Errol “Flabba” Holt’s rare 12″ version of “My Heart In Danger”, actually his first vocal effort – self-produced and recorded at Randy’s. It’s a big tune by the legendary bass player of the Roots Radics, who is a great singer as well as can heard on this and other vocal cuts he has recorded. The flipside features a roots killer, the Clive Chin produced “Created By The Father” by Errol Dunkley feat. I Roy. This tune, just like the “Flabba” Holt piece, was recorded at Randy’s, the small studio at 17 North Parade that had become the first choice for most of the leading reggae producers especially after it had been rebuilt by then resident engineer Errol ‘ET’ Thompson. The latter, one of the greatest Jamaican recording and mixing engineers, did a great job on this heavy dub style version. The next vinyl platter contains two extended cuts by gifted singer Freddie McKay; the outstanding “Fire Is Burning” and the totally matching “Lonely Man”, a song with bitter-sweet lyrics and a hard-hitting riddim. Noel Phillips, better known as Echo Minott, is also represented with two tracks, both produced by Linval Thompson in the early ’80s and originally released on the Jah Guidance imprint. Coming ‘inna rub-a-dub stylee’ are the well crucial “Girls A Mad Over Me” and the moving reality tune “The Saddest Day In My Life”. No signs of tunes by the great Sugar Minott as a singer, only two in which he was involved as producer. Both Junior Reid and Clive Bright aka Tenor Saw (discovered at 19 years old by Sugar Minott) were commissioned by the producer/singer to record a number of tunes on his Youth Promotion label. Selected for this release are Junior Reid’s great “What Do You Know” and Tenor Saw’s huge “Lots Of Signs”, a timeless classic from the singer with an exceptional voice.

Conclusion All in all more than five hours worth of reggae & dancehall music. Worth picking up for the vinyl alone!