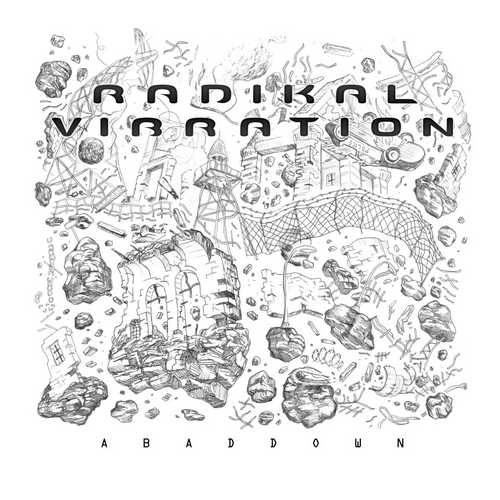 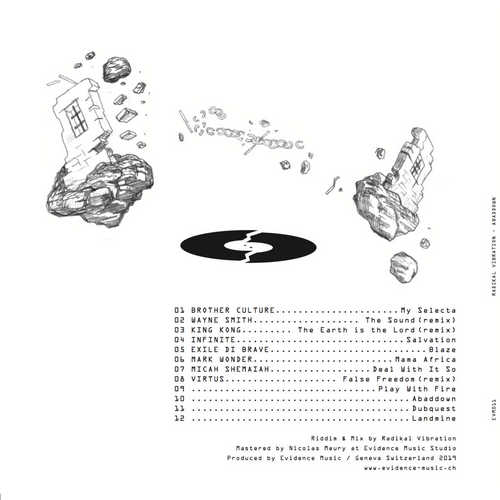 In 2015, the Radikal Vibration collective was formed by members of Geneva’s High Skank and Youth Solidarity crews. Consisting of Flegus, Sabu, Sonjah and Robert Safety, these four dub makers with each one having his own home studio to built riddims, share the same goal: producing as much music as possible and play these productions on their own custom built sound system. So far they have released quite a few electro-dub productions coming out of their Radikal cookstoves on their own bandcamp page, but – as mentioned – attracting notable attention worldwide with the backdrop of Brother Culture’s “Jump Up Pon It”.

While Radikal Vibration offers a solid, heavy dub selection for the base of this “Abaddown” album, Evidendence Music is the driving force behind bringing in veterans as well as upcoming artists to voice the various riddims in order to offer a variety of styles. As one might expect, Radikal Vibration’s musical backdrops contain many modern electronic influences and also the UK Steppers style isn’t far away on most of the tracks.

Brother Culture opens with the previously released single “My Selecta”, an irresistible, danceable piece about roots dances and sound system culture and, after “Jump Up Pon It”, another winner for the UK roots veteran and the Radikal Vibration crew. Next comes “The Earth” by the legendary King Kong, who revisits his 2006 roots scorcher “Earth Is The Lord” (Massive B) in great style – one of the album’s highlights. Before his untimely death in 2014, Jamaican reggae and dancehall singer Wayne Smith of “Under Mi Sleng Teng” fame collaborated with Evidence Music on several occasions, so his appearance on this album isn’t a real surprise. Any time you can get a song from this artist, you know you have something potentially special. And indeed, his tune about sound system business is awesome!!!

After being treated to a great opening sequence of this album by these three veterans, the quality doesn’t dip at all. Of course, not each and every track that follows easily matches the strength and height of the three tracks that open “Abaddown”, but the majority comes pretty close. Amongst them are a couple of mighty tunes that simply trigger the listener to play them more than once. These include Mark Wonder’s wonderful cultural piece “Mama Africa”, Micah Shemaiah’s “Deal With It” (underpinned by the relicked riddim of Mikey Dread’s “Roots and Culture”), Teacha Dee’s “Jah Say”, and Denham Smith’s “Run Or Dance”. The latter portion of the album features four scintillating electro-dub outings, which will surely be fulljoyed by the avid roots sound system fan.