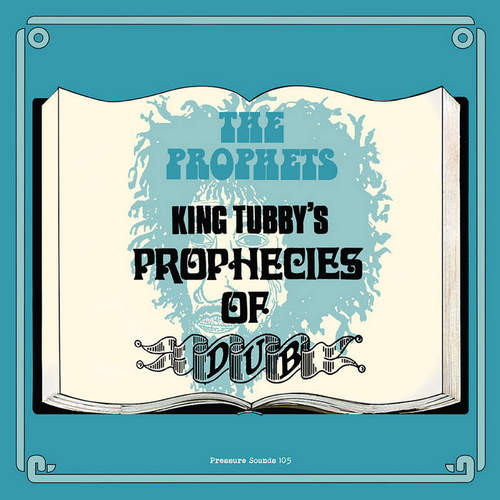 Since the release of a retrieval of the early ’70s compilation “An Even Harder Shade Of Black” by Santic & Friends in 1995, London-based Pressure Sounds has established itself as one of the most enduring reissue record labels in the reggae world. During the last 25 years, the label has served fans of classic reggae and dub music very well with, by now, more than 100 full length album releases which include many must-have sets. Besides that they also came up with an incredible amount of vinyl singles in various formats.

For all fans and followers of Pressure Sounds, the year 2020 has started with the release of The Prophets’ “King Tubby’s Prophecies Of Dub”, originally released in Jamaica in very limited numbers on the Prestige and Prophets labels in 1976. The title of the album might confuse record collectors and dub enthusiasts as it is very similar to the slighty earlier released essential album “King Tubby’s Prophesy Of Dub” (reissued by Blood & Fire in 1995), which was also produced by Vivian Jackson aka Yabby You.

Although the name King Tubby is included in the title of this album, text on the rear sleeve of the original LP stated that Pat Kelly was at the control. This is understandable as Pat Kelly was working at Tubby’s studio at the time, since Tubby had partly stepped back from mixing work to concentrate on his electronics. However it was King Tubby who was still credited with most of the music coming out of his studio, because often – for obvious reasons – the producers wanted Tubby’s name on their releases. Pat Kelly actually had a glittering career as a vocalist, alongside his spells as an audio engineer (he spent a year in Springfield MA to study electronics) at Randy’s and King Tubby’s studios. Although he specialised in recording vocals, he also mixed some classic dub sides including versions to “Trod Along (Zion Pathway)” by Ricky Storme aka I Kong and Don Carlos’ “Nice Time”, and dub albums like “Rockers Almighty Dub” by the Aggrovators & Revolutionaries and Bunny Lee & Aggrovators’ “Presents Super Dub Disco Style”.

Although Yabby You is credited as the producer of “King Tubby’s Prophecies Of Dub”, most of the backing tracks dubbed out by Pat Kelly were not actually produced by him, but belonged to Bunny ‘Striker’ Lee. At the time the latter was the major patron of Tubby’s, and thus he used to leave and store all his multitrack tapes at Tubby’s place. As Vivian ‘Yabby You’ Jackson and Bunny Lee had shared backing tracks before, with the former recording Tommy McCook’s sublime “Death Trap” over one of Bunny’s riddims, and Bunny had long acted as a mentor to Yabby You, the latter presumably felt entitled to use the stored 4-track tapes to create a dub album.

And thus eleven of the album’s tracks are dub versions of Bunny Lee produced tunes from 1976 over ‘flying cymbals’ riddims laid by the the Aggrovators. For the opener, “Fair Lady”, Pat Kelly utilized the multitrack of Linval Thompson’s “Long Long Dreadlocks”. From the same multitrack comes an unreleased cut of “Simmer Down” by Johnny Clarke on a modified “Move Out Of Babylon” riddim, which was used for the next dub version titled “Babylon Red”. Also the next track, “South West Block”, comes from a Johnny Clarke tune; the singer’s version of Curtis Mayfield’s “Ten To One”. Those familiar with Delroy Wilson’s “Sings For I” album, will then recognise the riddims of the next four dubs. Also present on this collection are two cuts from Horace Andy, “Serious Thing” and “Man To Man”. Then it’s time for Johnny Clarke again with “Live Up Jah Man” and “Stop The Tribal War”. Before the bonus tracks drop in, the original album ends with the sole Yabby You riddim, an awesome dub of Dicky Burton’s “God Is Watching You”. This version is noticeably different from the Tubby’s mix as heard on the “Beware Dub” album. The last four tracks are different dub versions of Johnny Clarke’s “Ten To One” and “Live Up Jah Man” plus “Serious Thing” and “Man To Man” by Horace Andy. These feature vocals coming in and out of the mix.

Conclusion A very welcome reissue of an obscure and mysterious dub album.