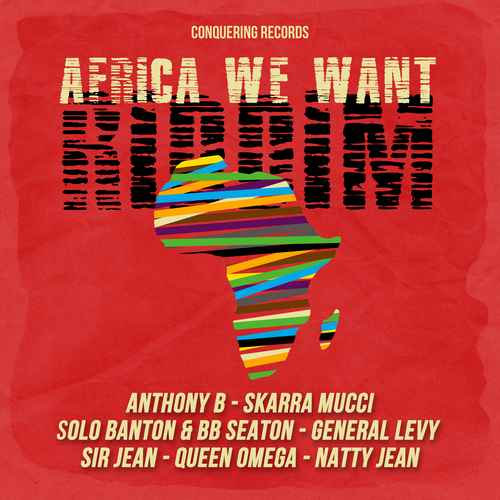 Conquering Records is the label of the French sound system Conquering Sounds. After several years of activity in the sound system business, Green Ben and Ju-Lion decided to go into production. They started with a mixtape called Gun Salute Mixtape which carried nuff dubplates from the likes of Capleton, Johnny Osbourne, Lutan Fyah, Tarrus Riley and one of the crew’s favorite vocalists Sir Jean. African by origin, he founded groups such as Le Peuple de l’Herbe. In 2017 they unleashed the My Enemies Riddim, a backdrop by Green Ben, a reggae/hip-hop flavored riddim based on a sample of Yabby You’s Deliver Me From My Enemies. The year 2018 saw the release of the Speed It Up project and now they surprise the reggae community with their latest effort, Africa We Want Riddim.

The riddim is an appealing update of the tune Africa, done by The Gaylads in 1967 for Studio One. Written by master songwriter BB Seaton, the tune was expertly covered by several artists. Noteworthy versions were delivered by Stephaine Samuels in 1978 for the Channel One imprint and Dennis Brown’s version of the song he recorded for Niney The Observer.

Now it’s time for contemporary artists to voice the riddim. The uptempo, highly danceable backdrop is perfect for the line up of artists presented here. Each tune samples snippets of the original tune and that is just great! There’s the Original FireMan, Anthony B. He makes no mistake as he rides the riddim as a machine gun and makes it his own. He’s “in need of an African Girl” and praises the Homeland, but hopes the younger generation will still be aware of their African origins. Speed rapper General Levy hasn’t lost any of his power and energy as he delivers the rootical gem Jah Guide.

Senegal, a West African country, delivers two artists. First the aforementioned Sir Jean (we must admit that it’s the first tune we hear from him). No idea what the man is rapping about, but he delivers a great job in full speed, clear and with conviction, but Natty Jean also flows triumphantly across the riddim with Alkebulan Children. Ital dimensions!

The only female artist here is the well-known songstress Queen Omega. Her track is pure fulljoyment, an ode of positivity. Skarra Mucci shines like a blazing fire as he singjays about Real African. The album closer is a killer! Old meets new, Solo Banton teams up with the original BB Seaton for the final version of the song. BB Seaton changes the original chorus line into “sound system we want to go” to match Solo Banton’s lyrics! BOOM!