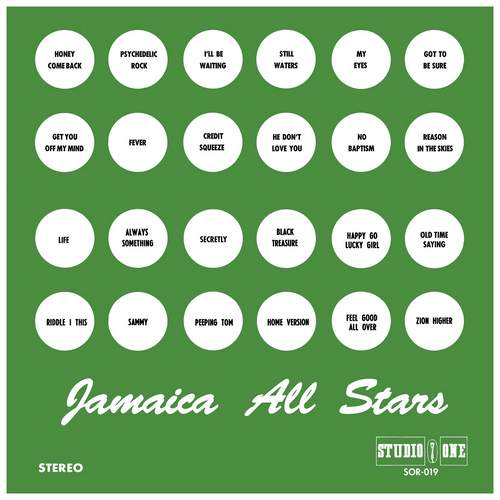 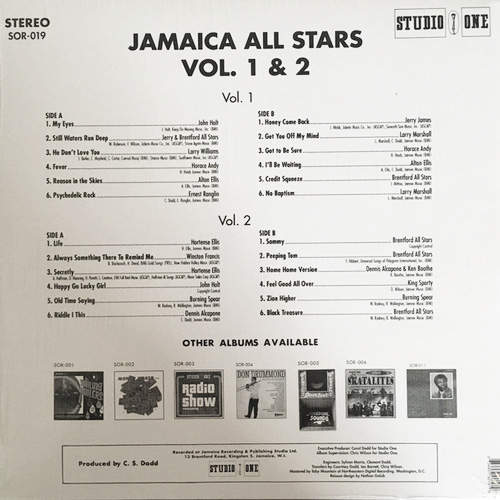 After the September 2018 released Skatalites album “Ska Authentic”, the avid Studio One aficionado had to wait a very long time to finally see the Yep Roc Music Group, which since 2016 has been partnered with the legendary Studio One label to reissue albums as well as entirely new compilations of rare and unreleased material from the vaults, come up with a next album release. This time it’s the first-ever reissue of “Jamaica All Stars” , a compilation of two of the rarest releases in the iconic Reggae label’s catalog: “Jamaica All Stars Vol. 1” (1972) and “Vol. 2” (1974). Both LPs, originally only released in Jamaica in split stereo before they were repressed, have been out-of-print since the early ‘70s.

The majority of the tunes included on this set were originally released on 7″ singles in Jamaica and the UK between 1968 and 1974. However Larry Williams’ “He Don’t Love You”, Larry Marshall’s “Get You Off My Mind” and “No Baptism”, and the vocal tunes “Sammy” and “Peeping Tom” by Bobby & Dave with the Brentford All Stars, could only be found on the two original LPs. Of course produced by Coxsone Dodd, this reissue – with the tracks officially remastered from the original tapes – has been overseen by Studio One/Heartbeat Records’ Chris Wilson and contains the original artwork and labels from the initial releases. The dbl LP contains two inner sleeves each featuring the original artwork of Vol. 1 and Vol. 2. Therefore, some of the track names and artist names differ from the original artwork on the inner sleeves and what is on the back cover.

John Holt, one of Reggae’s golden voices, starts off with a beautiful tune from 1971 titled “My Eyes”, which he re-recorded for producer Henry ‘Junjo’ Lawes in the early ’80s. Another fine song by John Holt is a do-over of “Happy Go Lucky Girl”, the 1967 Rocksteady scorcher he recorded as a member of the fabulous group The Paragons for Duke Reid’s Treasure Isle imprint. Also present with two tunes is Horace ‘Sleepy’ Andy. First there’s the solid 1969 tune “Fever” and then there’s another beautiful lovers piece named “Got To Be Sure”, a track known from his Studio One debut album “Skylarking”. Always good to listen to songs done by Mr. Soul of Jamaica, Alton Ellis, and both the beautiful “Reason In The Sky” and “I’ll Be Waiting”, on which he croons like a sultry Marvin Gaye, are no exception. The powerful solo artist with a unique vocal style, Winston Rodney aka the Burning Spear, entered music business in 1969 after an audition with Coxsone Dodd. Nearly all of the tunes he recorded for Studio One until 1974 were informed by his Garveyite beliefs and faith in Rastafari. Although the singles “Old Time Saying” and the massive “Zion Higher” weren’t successful, they surely were groundbreaking records at Brentford Road.

As already pointed out this compilation also features tunes from lesser successful artists. Some of these artists’ tunes are Reggae-fied covers of Soul tunes, due to the fact that at the time Jamaica’s popular music was heavily influenced by American R&B and Soul records of the ’60s and ’70s. Jerry Jones’ “Still Waters Run Deep” is a well done rendition of the The Four Tops song from 1970, while Jerry Butler’s “He Don’t Love You” (originally titled “He Will Break Your Heart”) gets a worthy interpretation by Larry Williams. Also nice to hear is Winston Francis’ version of Dionne Warwick’s “Always Something There To Remind Me”. Highlights of the remaining tracks are Larry Marshall’s version of The Ethiopians’ “No Baptism”, Dennis Alcapone’s “Riddle I This” and the album closer “Black Treasure” by Brentford All Stars.

Conclusion A very nice collection of tunes from the vaults of Studio One.