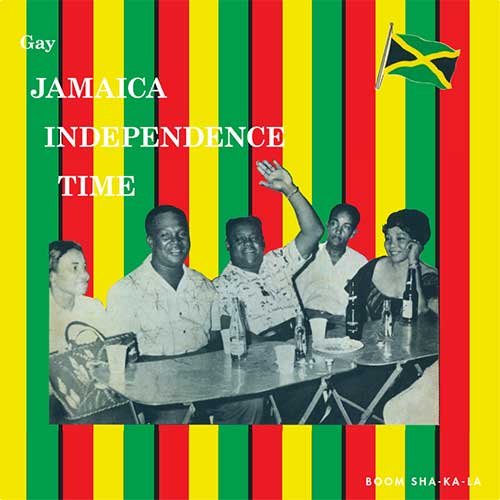 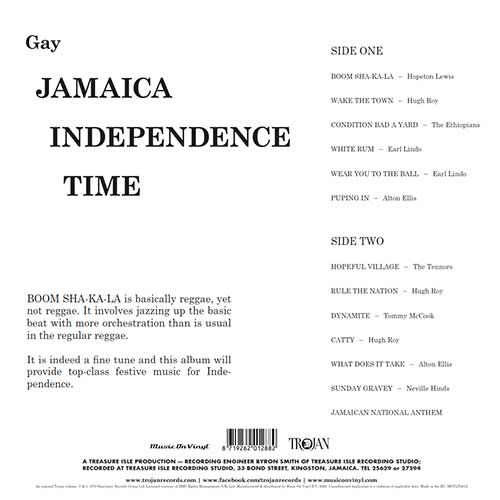 Arthur ‘Duke’ Reid was the owner The Treasure Isle Grocery and Liquor Store on Bond Street. Above the store, he had a small studio. From the period 1966 to 1968 he was the king of rocksteady on the island. With production values on a par with those at Motown, Duke Reid was responsible for many of Jamaica’s classic hits. Duke was a colorful character with its bandolero and always carrying a pair of pistols.

When the beat changed from rocksteady to the new sound of early reggae he found it difficult to make the changeover, it really wasn’t his thing. However, with his impressive roster of artists and superb session musicians he soon adapted to the new sound. Tunes by the likes of Hopeton Lewis, The Tennors, The Ethiopians, Ken Parker and John Holt provided him with the hits he needed.

The 1970 album Gay Jamaica Independence Time was a JA only release on Treasure Isle. It was issued to commemorate the 8th anniversary of the island’s independence. Fifty years later it’s available once more, courtesy of Music On Vinyl. The Dutch vinyl only (high-quality 180g LP’s and 7inch pressings) reissue label has already earned respect in the reggae scene with superb vinyl reissues of classic albums. Check out Desmond Dekker’s 1967 album 007 (Shanty Town), Ini Kamoze’s debut LP, Aswad’s Live & Direct, The Heptones’ Nightfood , Pablo Moses with A Song, Rivers Of Babylon by The Melodians, The Upsetters’ Scratch The Upsetter Again and Derrick Morgan with Derrick Morgan And His Friends.

Hugh Roy aka U Roy

U Roy (here misspelled as Hugh Roy) recorded for Duke Reid’s Treasure Isle imprint several giant tunes. Two of them, Wake The Town and Rule The Nation are included in this set. Wake The Town, with its classic intro, finds him toasting across Alton Ellis’ song Girl I’ve Got A Date. Rule The Nation, again with a classic intro, comes across Love Is Not A Gamble by The Techniques. His third tune is Catty, originally known as Big Boy & Teacher.

As usual Duke Reid included several instrumentals on his lp’s. Here we are treated to two fine organ cuts by Earl ‘Wire’ Lindo. After his session work at Treasure Isle he joined The Wailers on a US tour. Later he would play on numerous recordings for Jamaica’s greatest artists. White Rum is a typical early reggae keyboard romper, followed by Wear You To The Ball, his take on The Paragons’s classic rocksteady hit. On side 2 Neville Hinds, another keyboardist, tackles Alton Ellis’ Sunday Coming. Finally, the saxophone meastro Tommy McCcook adds a splendid brass interpretation of Boom Sha-Ka-La by Hopeton Lewis. The LP rounds off with a short version of the Jamaican National Anthem.

Alton Ellis delivers a flawless rendition of What Does It Take from Junior Walker And The Allstars. His other tune is less interesting, it’s a funky upbeat soul/reggae tune. The Tennors also recorded for Duke Reid’s main rival Coxsone Dodd, scoring with Pressure And Slide. Here they perform the hit single Hopeful Village. Under the guidance of Clive Tennors they are still performing! Another top group from that period was The Ethiopians. Their solid social commentary song Condition Bad A Yard was one of the few tunes they recorded for Duke Reid. The album opener, Hopeton Lewis’ Boom Sha-Ka-La, was the 1970 Jamaica Independence Festival, an annual celebration of Jamaica’s independence. 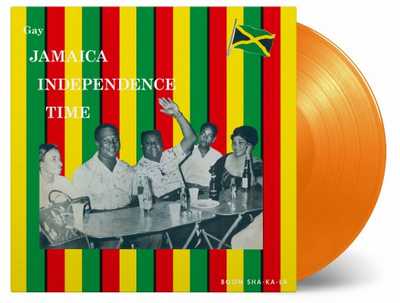 Conclusion Niceness from the legacy of Treasure Isle!