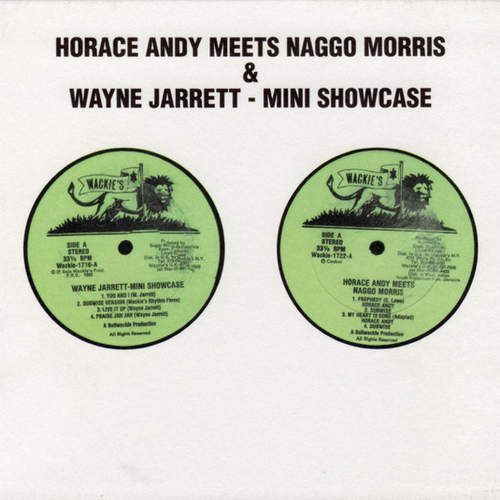 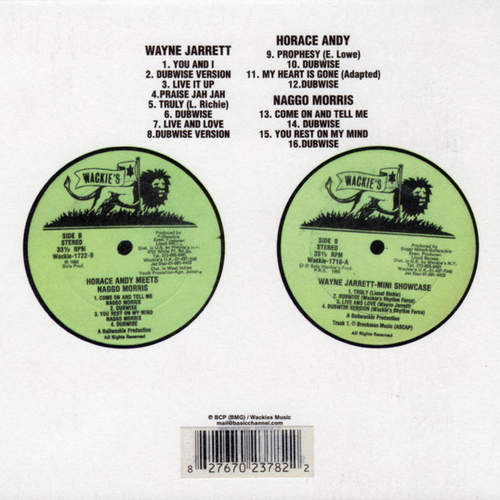 Horace Andy, Wayne Jarrett and Naggo Morris are all artists whose work for the legendary Wackies label undoubtedly belongs to their very best. This album brings together Wayne Jarrett’s “Mini Showcase” LP and the 12″ release “Horace Andy Meets Naggo Morris”.

These 1983 releases, revived by German-based Rhythm & Sound/Basic Channel on cd, present the singers in the so-called “Showcase” style – an album on which vocal tracks are followed directly by their dub versions. Producer in charge is Lloyd Barnes aka ‘Bullwackie’, who worked for Duke Reid’s infamous Treasure Isle label before emigrating to New York in the early ’70s. Here he founded the Wackie’s House Of Music and behind this shop-front was the first significant reggae studio and label in the United States. Wackies’ lineage is classical – rooted in Studio One and Black Ark – but cut with the acid urbanity of New York City. Its sound is characterised by pervasive echo and deep bass: the atmosphere is luminous and unique.

Several local artists made their names here, and a roll-call of great Jamaican artists such as Horace Andy, The Meditations, Leroy Sibbles, Sugar Minott, Max Romeo, and Jackie Mittoo recorded some of their best sides at Wackies. Unavailable for many years this timely release is sure to please all fans of the classic original Wackies sound as found on the perennially popular Horace Andy and Wayne Jarrett albums “Dance Hall Style” and “Bubble Up”. The music featured here is classical and original with inimitable and glorious dubs throughout.

A good mix of roots and early dancehall styles prevail with Wayne Jarrett’s awesome Live & Love” (not the same as the Horace Andy track on “Dance Hall Style”), and Naggo Morris’ “You Rest On My Mind” being prime examples of the dense Upsetterish Wackies sound of the day. All tracks are heavy collectors items and are great to hear in digital clarity.

Conclusion This is an essential release and thus strongly recommended!