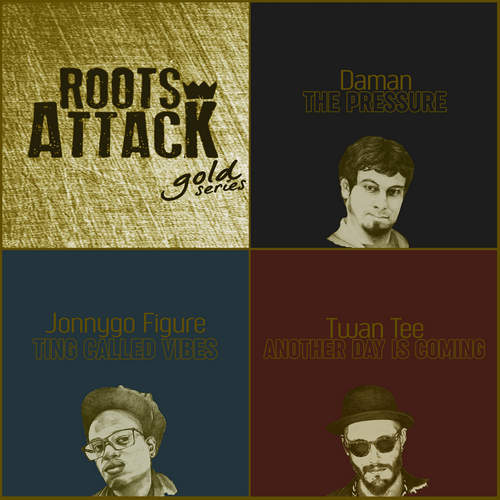 Roots Attack started its production work and label back in 2016 and since then the attention of reggae aficionados was drawn with some prestigious collaborations featuring Jamaican legends such as Winston McAnuff, The Viceroys, Leroy Brown, Joseph Cotton, Trinity, U Brown, and Linval Thompson. Besides that there were also works with some French singers such as I Fi, Twan Tee, Sista Jahan, Junior Roy, and Zepho.

On various releases, one can hear that Jérémie “Jeh Jeh” Clergue is heavily inspired by the sound of the golden age of Jamaican reggae music, and this “Gold Series” project is no exception. The listener is treated to the authentic and typical Roots Attack sonority, switching from Rub-A-Dub to Steppers style but still dealing with a warm sound and a musicality that is its own.

Daman, a reggae vocalist based in Paris, is no newcomer as his discography includes nearly 10 vinyl singles, 5 CDs, and 20 digital EPs. Here he fully displays his sweet and captivating voice on the awesome social commentary “The Pressure”. While Daman tells about the pressure getting higher day by day for the workers, oppressed by some profit-hungry bosses, the backdrop illustrates the burdensome atmosphere enduring by employees which are slaves from a system awarding financial success to the detriment of human welfare.

JonnyGo Figure is a producer, singer, MC and DJ, who is also known as a member of the Deadly Dragon Sound System crew. Towars the end of 2019, Bent Back Records put out his full length debut album “Crucial Showcase”, which was well received in reggae circles. Here he delivers the solid “Ting Called Vibes”, a song about him, MC and entertainer guided by his faith, and about the vibration he bears everyday. The entertaining song comes across a heady and haunting riddim which somehow reminds of Barrington Levy’s “Murderer” riddim – originally “Hot Milk”.

And then there’s also “Another Day Is Coming” by Twan Tee, one of Roots Attack’s regular partners. The powerful riddim of this prophetic and visionary song is complemented by a horn section consisting of Gregory Benzekry (saxophone) and Valentin Pellet (trumpet). This effort is tailor-made for sessions done on a heavy custom built roots sound system. Pure niceness!!

While the vocal cuts are digitally available on every download platforms, the respective dub versions are only available on the Roots Attack bandcamp page.​

Conclusion All in all an interesting and well done musical project.