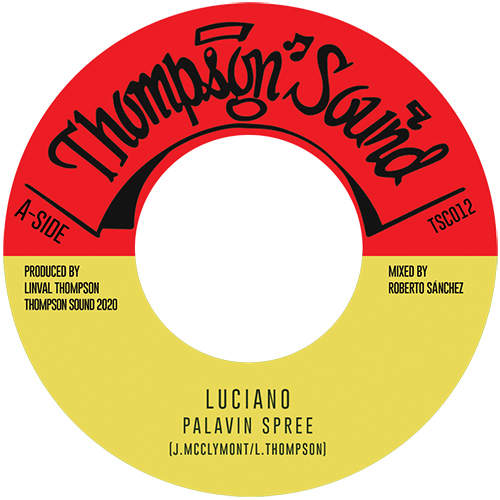 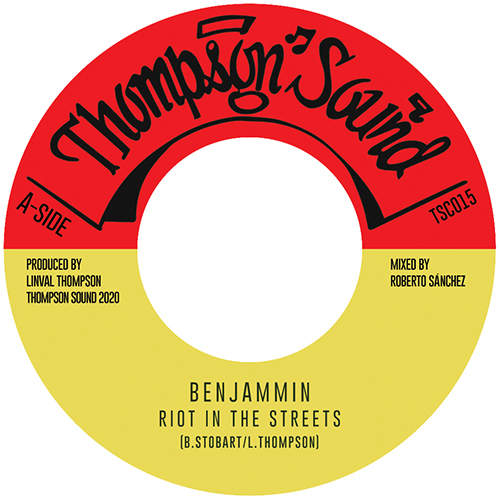 In the spring of 2018, Roberto Sánchez’s A-Lone Productions imprint released the 10″ vinyl single “Whom Shall I Fear” by veteran singer Linval Thompson. It was the first notable offering coming from their collaboration, which not only includes recording brand new tunes but also a partnership regarding reissuing classic albums from his catalogue like e.g. Linval Thompson’s “I Love Marijuana” and The Viceroys’ “We Must Unite”.

Now Linval Thompson has returned to his producer’s chair and has revived his Thompson Sound imprint. In collaboration with Roberto Sánchez, who mixed the tracks, he brings his devoted fans and long-time followers brand new rootikal productions on three 7″ vinyl platters. Riddim spotters will instantly recognise two classic Channel One riddims produced by Linval Thompson back in the late 1970s and played by the Roots Radics band – “Jah Jah Dreader Than Dread” and “Mr. Bassie”. The former underpins Luciano “Palavin Spree” and Nadia McAnuff’s “Words Of I Mouth”, while the latter has been used for Benjammin’s “Riot In The Streets”.

Altough the prime years of Luciano, the dominant roots reggae singer from about 1995 to 2004, are over, the one they call the ‘Messenjah’ still has something of interest to offer. In this case it’s the stellar “Palavin Spree”, which sees him seemingly effortless ride the heavy early dancehall roots riddim “Jah Jah Dreader Than Dread”. The other single for the riddim features the new sensation out of Kingston named Nadia McAnuff. The lyrics of her cut, “Words Of I Mouth”, are adapted from the texts of Psalms 19 and 1 in the Bible and are known from reggae songs such as the Melodians’ “Rivers Of Babylon” and Prince Far I’s “Psalm 1”. The dub versions of both vocal cuts are a real pleasure for the ears.

The third 7″ single features Lone Ark favourite from the UK, Benjammin, who rides Roots Radics monstrous lick of Studio One’s “Mr. Bassie” riddim in a wicked rootsman style. His topical song “Riot In The Streets” is heavyweight roots music of the highest order. The vocal is backed by a tuff dub version. This one is a must for all roots reggae & dub lovers!

And then there’s also a brand new riddim called “Get It”, produced by Roberto Sánchez and Linval Thompson. Composed by the former, it’s – as one could expect – a backdrop that perfectly fits the two classic Channel One riddims. Veteran Half Pint recorded some of the reggae’s early classics such as “Winsome”, “Money Man Skank”, “One In A Million”, “One Big Family”, “Mr. Landlord” and “Pouchie Lou” during the first half of the 1980s. His 1984 song “Greetings” is still played in the dance halls today. “Go To Get It” shows that Half Pint, after all those years, is still able to deliver a worthwhile tune.

Conclusion A good set of vinyl singles that will please the roots reggae & dub lover.