Mango Wood – Stomp You Down 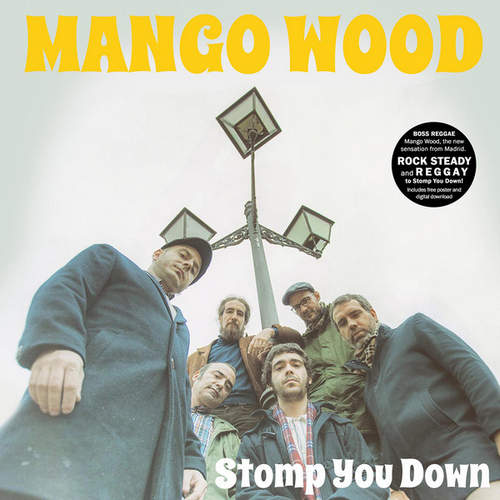 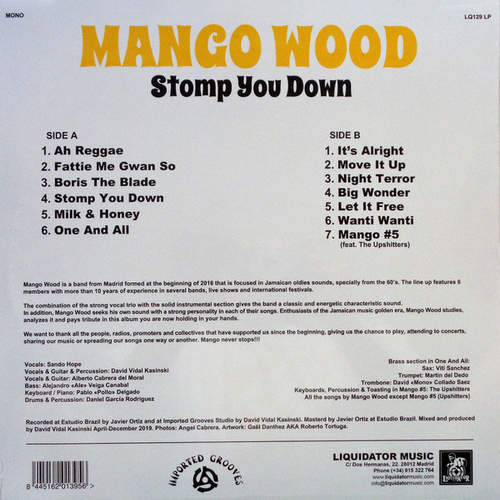 Mango Wood – Stomp You Down

Mango Wood, a band from Madrid formed at the beginning of 2016, is a Ska/Rocksteady/Early Reggae group with members of groups like Upsttemians, Einstein, Ready Getters, Rude Pride, Hypocondriacs, The Crepitans, Free Mode, etc. The name of the group is an ode to the Calypso and Mento groups of the 1950s, who delivered songs with a high percentage of sexual lyrics, using an immense variety of vocabulary. Mango Wood’s music style focuses on the oldest Jamaican sounds, especially from the 1960s, but with a versatility that allows the group to play live both as a band and as an acoustic group.

Being a group with a short history, its ranks are made up of members with more than 10 years of experience in recording albums & singles and performing on Spanish and international festivals, etc. The line up consists of Sando Hope (vocals), David Vidal Kasinski (vocals & guitar), Alberto Cabrera Del Moral (vocals & guitar), Alejandro Veiga Canabal (bass), Daniel García López (drums), and Pablo “Pollo” Delgado (keyboard). Mango Wood’s powerful vocal section recalls various Jamaican groups from the late 1960s such as The Maytones, The Versatiles, The Kingstonians, The Wailers, The Pioneers, The Maytals and The Ethiopians, and its solid instrumental section gives the group a very characteristic and energetic vintage sound.

At the beginning of 2016 Mango Wood recorded their first single with Pablo Martínez in the classic Madrid studios of Musigrama. Both songs that make up this digital single are mixed and mastered by Brian Dixon (The Aggrolites, Jr. Thomas & The Volcanos, See Spot) in Los Angeles. For the song “Fall” they turned to Benedicto Moya from Burning & Shooting and for “First Time” to Julia Jurschick. And now there’s the group’s first full length album titled “Stomp You Down!”, which was recorded 100% analog at Brazil Studios in Madrid.

“Stomp You Down” features thirteen fresh original tunes with infectious vocal grooves and instrumental dancehall stompers. The group seemingly effortless switches between classic Ska, Rocksteady and Early Reggae. All tracks have an incredibly lively sound, capture a lot of atmosphere, and are positively bristling with fun. A few pieces (“Boris The Blade”, ““Night Terror”” and “Mango #5”) are purely instrumental with dominant keys, while on the rest the instrumals are paired with good vocals. However, all of them are wrapped in a clean 1960s sound. Not every artist, group or band manages to deliver a debut album that sounds really good from beginning to end, but Mango Wood has done it! With tracks that range from solid to good, there’s no weak moment to be found, which is a well-deserved compliment for the group. Personal favourites are “Fattie Me Gwan So”, “Milk & Honey”, “One And All”, “Move It Up”, and “Wanti Wanti”.

Conclusion A thoroughly entertaining debut album with 13 tracks that range from solid to good.