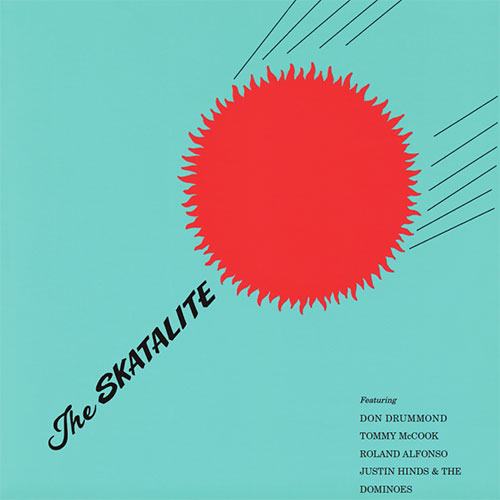 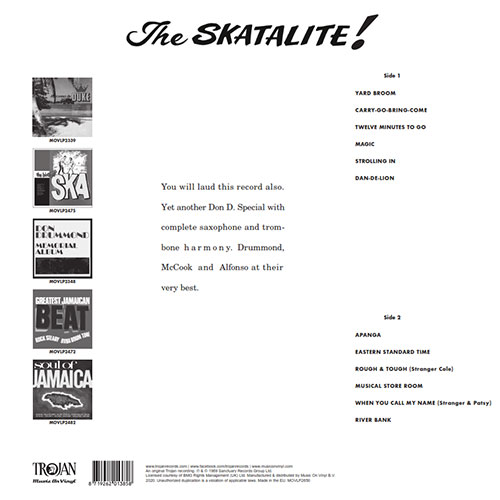 Formed in 1963, the Skatalites were the créme de la créme of Jamaica’s musical talent at the time. The personnel fluctuated from time to time, but the most important instrumentalists were: Don Drummond, Tommy McCook, Roland Alphonso, Johnny “Dizzy” Moore, Lester Sterling, Jackie Mittoo, Jah Jerry, Lloyd Brevett and Lloyd Knibbs. The band lasted for two years, a combination of several problems caused them to break up in late 1965, leaving behind a wealth of historical recordings. Clement Dodd persuaded Jackie Mittoo and Roland Alphonso to leave the band and form the Soul Brothers as the Studio One house band.
Tommy McCook worked mainly for Duke Reid at the Treasure Isle studios, where he was a pivotal figure in creating a cartload of ska & rocksteady classics. Sadly, Don Drummond took his life on May 6, 1969, in the Bellevue Hospital, Kingston.

Their music was a powerful synthesis of American R&B, combined with swinging, jazzy “take-off” solos, forming in the process something uniquely Jamaican – the first music to come out of the post-war colonial independence movement of the West Indies. The Skatalites backed every singer of note in the island’s studios and cut hundreds of instrumentals under various names, thus laying the foundation for today’s Jamaican music.

Duke Reid (but also other producers) realized that the LP was a profitable format for reviving the previously tunes that were released as 7inches. One of the albums he issued was the 1969 LP The Skatalite, a mixed set of instrumentals and vocal cuts he recorded in the first half of the 1960s. The vinyl only re-issue (limited edition on cloured vinyl) of this LP by Music On Vinyl is a welcome release for all vinyl collectors!.

This set with mainly instrumental cuts features three vocal performances. Probably best known is the 1963 uptempo ska version of Carry Go Bring Come, a number one hit in Jamaica for Justin Hinds & The Dominoes. A few years later he would re-record the song in a rocksteady version. Then we have two songs by Stranger Cole, a well-known figure in the Jamaican reggae industry. His recording debut in 1962 for Duke Reid, instantly found success with the mid-tempo ska/rhythm and blues single Rough and Tough. His uplifting duet with Patsy Tod, When You Call My Name was quite popular in the dancehalls of the island.

Any ska/reggae fan will recognize the certified classics on this LP, all three released in 1964. Immediate ‘rewind’ is required when spinning Dan-De-Lion, with the incredible Don Drummond reigning supreme across a tight riddim by The Supersonics! Another Don Drummond scorcher is Eastern Standard Time, with Don inna reflective mood. The infectious Musical Store Room is simply irresistible when trumpet player Frank Anderson and saxophonist Roland Alphonso lay down some truly danceable grooves.

The lesser known tunes are in no way less in terms of quality. Check the classy solos from Roland Alphonso on Yard Broom. It appeared as Roland Alphonso Group – Yard Broom in 1965, but was also credited to Tommy McCook & The Supersonics. Magic is a wild ska/rhythm and blues stomper featuring solos by the likes of Johnny Moore, Rico Rodriguez, and Roland Alphonso. It’s impossible to tag Apanga as ‘ska’, a twanging guitar leads the riddim and the horns section jumps in whenever they like! The jumpy River bank is a worthy closer of the album. It was a single credited to trumpet player Baba Brooks 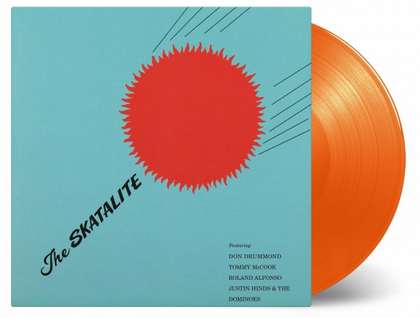 Conclusion Recommended blast from the past!