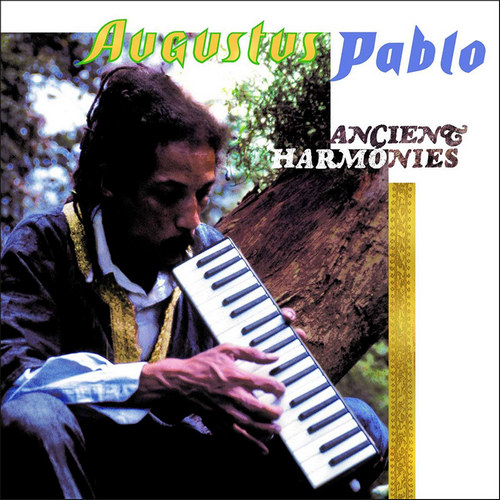 Disc One: Blowing With The Wind / Rockers Comes East

UK-based reggae label Greensleeves, now part of VP Records, first started to release an Augustus Pablo album in 1979 – “Original Rockers”. From then on more full length studio albums were released by the at the time leading reggae label including “Rising Sun” (1986), “Rockers Comes East” (1987), “One Step Dub” (1988), and “Blowing With The Wind” (1990), the four albums that are collected together on this double CD, a 6-panel digipack with 12-page book titled “Ancient Harmonies”. Although one would expect to have them featured here in chronological order, it ain’t. It’s almost just the other way around. The reason for this is very simple. The albums “Rising Sun” and “Rockers Comes East” total more than 80 minutes, and that’s why the album sequence had to be changed so everything could fit on two CDs. On Disc One the “Ancient Harmonies” set opens with “Blowing With The Wind” followed by “Rockers Comes East”, while Disc Two starts with “One Step Dub” and ends with “Rising Sun”. Anyway, what you’re offered are two largely instrumental and two dubwise sets.

The music on the four albums was recorded at Channel One, Tuff Gong, Dynamic, HC&F and Creative Sound with engineers including Scientist, Cedrica ‘Soldgie’ Hamilton, Phillip Smart and Steven Stanley. the hardcore steppers and nyabinghi meditations were keenly embraced by the new age sound system culture in Japan and Europe.

In 1983, Greensleeves released Augustus Pablo’s “King David’s Melody”, a compilation album with self-produced tracks recorded between the late ’70s and the early ’80s. It featured reworkings of classic riddims for which he was so revered, but also efforts that pointed towards his future works as it was the time that Jamaican music began to shift again as the computerized style started to emerge. Although he had experimented and rehearsed with drum machines, he would never fully embrace computerization. Partly due to health issues, he sparsely released material during ’84/’85. After having spent some weeks in the US, where he performed and recorded digital riddims in New York, he returned with the 1986 released “Rising Sun” album.

Blowing With The Wind

Just when the reggae connoisseurs were writing Augustus Pablo off, his reputation was restored by this truly amazing return to form with the 1990 released “Blowing With The Wind”. It became his most successful album since the ’70s. The new element that made a difference was Nyahbinghi drumming, half a decade before it returned to fashion with its employment on Mad Cobra and Buju Banton records. True, it is only featured on two tracks – “Blowing In The Wind and “Drums To The King” – but these are the longest on this meditative album, and the non-Nyahbinghi workouts still have Pablo sounding far more focused than on most of his modern material. The trumpet of Johnny ‘Dizzy’ Moore, one of the original Skatalites, is a further link with tradition, and another delight.

In an interview with David Katz, Augustus Pablo described working with the Nyahbinghi drumming as a reaction to computerization:
“When we went to the studio they were saying that they’re not doing no live recording again. Everybody gone crazy; after the world make it through live music, they just bring in computers, so I’m against them who invented it. When I went to the studio they say ‘Cant’t do live music, srictly computers,’ so I put out Binghi music.”

With the release of the dub album “Rockers Come East” in 1987, Augustus Pablo continued to ‘mix up the vibes a little more’. Featuring excellent digi-dubs to Junior Delagado’s hits “Raggamuffin Year” and “Call Me”, steppers like “Sun Ray Dub” and the deep and heavy “Zion Seals Dub”, the album continued Augustus Pablo’s journey into a revolutionary new age. This set was engineered by Phillip Smart and Michael Carroll. It’s perhaps the most underrated Pablo album, as traditionalists in 1988 found it difficult to accept their favourite artist employing digital riddims, or quite such a low-key approach. The sound on “Rockers Come East” is more mellow instrumental sounding than previous Augustus Pablo releases.

Put out as the drum & bass counterpart to Junior Delgado’s hugely successful “One Step More” album, the release of the “One Step Dub” couldn’t have been better timed coming on the back of a hugely successful tour of Europe with Delgado. Engineered by Pablo himself, Soldgie’, Steven Stanley, Junior Delgado and Tony Kelly, “One Step Dub” includes dub versions to some big hitters from Jux such as “Hanging Tree” and “Riot In A Juvenile Prison”. However, this isn’t one of the best dub albums released by Augustus Pablo. Especially the wailing rock guitar of Earl ‘Chinna’ Smith, phaser effects on the drums, and the cheesy and cloying keyboard sound are simply annoying to hear.

As already pointed out, the release of “Rising Sun” in 1986 started a new era for Augustus Pablo by edging his Rockers revolution into the digital age. This worthwhile set goes from steppers like “Pipers Of Zion”, to the revival reggae of “African Frontline” – the melodica version of The Heptones’ “Party Time” – and the deep and heavy “The Day Before The Riot”. And don’t overlook its stunning title track either. This music on this set was engineered by two apprentices of the great King Tubby, Phillip Smart and Scientist.

With 39 tracks included on the 2 discs one can’t expect every piece to be really exciting. However there are plenty efforts to fulljoy, which makes “Ancient Harmonies” worth adding to your collection, i.e. if you don’t have the seperate albums already.

(Note for vinyl collectors: All four LPs will be repressed and released in July 2020)

Conclusion A 39-track double CD with plenty efforts to fulljoy.