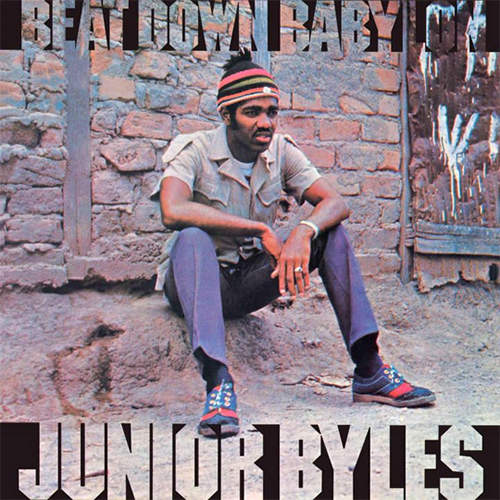 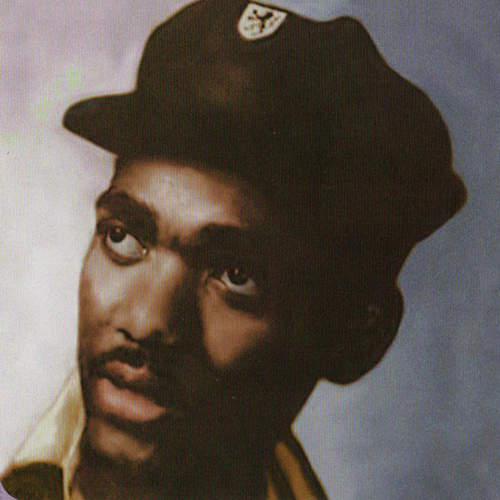 Disc One: Beat Down Babylon

Kerry ‘Junior’ Byles was born in 1948, and grew up in Kingston’s Jones Town area. When Junior left school, he worked first as a mechanic, and then as a fireman. Sometime around the mid ’60s, during the early rocksteady era, he made his first records under the name of Chubby & The Honeysuckers. By 1967 he had formed the vocal group The Versatiles, which furthermore consisted of Dudley Earl and Louis Davis, who later became a member of The Morwells. It seems that they initially recorded for a Mrs. Barnett, who produced at least four tunes with the group. The Versatiles recorded at least five tunes for Joe Gibbs during the time Lee Perry was his chief-in-house producer and arranger. Their single “Trust The Book” is underpinned by a very strong rocksteady riddim over which Junior Byles can be heard singing in fine style.

Around 1970 Junior Byles left The Versatiles and joined Lee ‘Scratch’ Perry to begin a solo career. Scratch then was just coming out of the early reggae and was ready to change the beat with a group of musicians that included the Barrett brothers, drummer Lloyd ‘Tin Leg’ Adams, bass player Val Douglas, keyboard player Glen Adams, and guitarist Alva Lewis. Perry was working out of the studios of Dynamic and Randy’s, and Junior Byles’ first tune for the Upsetter was “What’s The World Coming To” issued under the name of King Chubby and released on Pama Supreme in the UK. On this single, Perry had him singing his lyrics of common complaint over a chugging riddim filled out with a string arrangement that was typical of those times. Thankfully, this corrupt approach to making music did not harm the career of Junior Byles, like it did to so many others. And the next time he came forward he was to use the much more appealing title of Junior Byles.

His initial solo effort under the name Junior Byles was the single “Got The Tip”, released in the UK through Pama on the Punch label. The song is just a story of the singer’s day at the races, but it has The Wailers on harmonies so that makes it a bit special. In the two years from 1970 when Lee Perry produced Junior Byles’ first solo tune to 1972, Scratch’s work had become even wilder and more Rasta influenced. It was “Beat Down Babylon” with its militant lyrics over a angry scrubbing riddim that gave him and Perry a massive hit. The little known “Informer Men” also came out around this time. It featured deejay Jah T in combination style over the “Beat Down Babylon” riddim. Subtitled “Babylon Chapter 9”, it’s a song about anti-corruption and the work of informers.

“Da Da” followed, it was Scratch’s entry in the 1972 Festival Song Competition, and Junior Byles won it for him. The song was no “Beat Down Babylon”, but it was well sung, and had a fine scrubbing riddim. The lyrics were enjoyable as well. A string of simple catchphrases strung around a big bass chorus. Junior’s third big hit came with his first love song “Fever”, a cover of the Little Willie John R&B song from 1956. On this it was the use of that deep rich organ sound combined with a 30 second false start, as well as impassioned lyrics and the singer’s vocal that made this a classic.

With “Pharaoh Hiding” the singer returned to the biblical themes heard on “Beat Down Babylon”. Like the latter it features a well forward scrubbing rhythm guitar, that pushed the riddim on and on. Junior Junior Byles always seemed to revel in these type of tunes, which were often used for attacks on the system and its supporters. The song was recorded at and for Dynamics, but produced by Lee Perry. The “King Of Babylon’ is similar except that the beginning of the song is a plea for unity and righteousness. Nebuchadnezzer, a king of Babylon, is attacked for spreading evil across the land. Although Randy’s was credited for the production, it could be more of Scratch’s work as it has the scrubbing guitar and kinky organ work.

Probably the first cut of the riddim that U Roy used for “Double Six”, is the basis for the 1973 released “Auntie Lulu”, which picks up on the lyrical techniques he used for “Da Da”, but the song itself is Junior Byles’ contribution to an anti-illiteracy campaign of the time. It’s a fine contribution with a very intense vocal to match Scratch’s production. Another song in the same fine tradition of “Auntie Lulu” is “Education Rock”. If anything, it’s even closer to the style of “Da Da” with a very relaxed vocal approach. Another classic from this time is “Rasta No Pick Pocket”, where Junior Byles in great form criticises the false dread and those who run down Rasta. A slow heavy riddim with lyrics like “Rasta No Pickpocket, Rasta No Run Racket, Rasta No Want Rachet,” and “You think it’s the hair on your head, that make you dreader then dread, but it’s the heart within – Rasta no dwell in sin.” “Cutting Razor”, credited to The Versatiles is based on the Joe Higgs’ classic “Stepping Razor” from 1967.

Junior Byles’ first album release came in 1972. “Beat Down Babylon” was a change in direction, but, just like for example the Studio One works of Burning Spear, this great music was largely ignored. The “Beat Down Babylon” 7″ single had instantly made a huge impact, but at the time albums weren’t really checked for. The track found in one album showed that Junior Byles was one of reggae music’s greatest talents. A set of lyrical indicators of what was to come from him over the next five years. “Da Da”, the opening track, links in with “Auntie Lulu”, “Lorna Banana”, and “Weeping”, and uses many techniques of unusual lyrical composition, that was to form the basis of the dancehall style some six years later, where groups of ideas linked together, rather than words, make up the song.

As a Rastaman, Junior Byles sings of slavery, oppression and repatriation. These themes and others are to be found in “I’ve Got A Feeling”, “Beat Down Babylon” and “A Place Called Africa”. It shouldn’t be a surprise to find these songs to be some of the most conscious to be written on the above subjects. They are clear and direct explanations of the ongoing sufferation of black people. “Don’t Know Why” is a sad love song. “A Matter Of Time” concerns itself with young girls acting out of order. Surely an attempt at reasoning with the unreasonable. Which leaves “Demonstration” (“What’s The World Coming To” without strings and with a clearer mix), “Coming Again” and “Poor Chubby”, three views on reality that take in world destruction, revolution and exploitation, and show the artist’s great awareness, that grew over the years, enabling him to write classics like “Bur-O-Boy”, “Can You Feel It”, and “Chant Down Babylon”. The “Beat Down Babylon” LP was a huge step forward for reggae music, yet only a few saw it.

On this double cd set, the original album is bolstered by the remainder of Junior Byles’ released work for Perry, which includes numerous Jamaican hits plus lots other noteworthy pieces. The Rasta love song “Curley Locks” stands as the singer’s biggest hit as well as one of reggae music’s biggest sellers. Junior Byles sings over a slow piano led riddim with a lot of feeling, as he tries to explain to his loved one, the nature of her father. “Locks And Key”, featured on the flipside of the 1974 released “Curley Locks” single, is also interesting. For “Dreader Locks”, a version of “Curley Locks”, he’s joined by by Perry himself who’s doing sound effects and creative vocalising, while Junior Byles chants down Babylon in traditional fashion, with lots of blood and fire, lightning and brimstone. He also delivers a message to Prince Tony Robinson. For “Now Generation”, which takes as its theme the judgement to come on all and especially the wicked, Perry has created an almost reggae riddim, giving the piano the work of the organ or merging the two together for a mid tempo skank.

“The Long Way” is perhaps Junior Byles’ best ever recording. The power on this record is immense. It comes from the feeling he puts into the work and the raw energy Perry has blessed the riddim with. Lyrically, the song seems to be for his woman. Yet most of the time the song could be open to alternative interpretation. Its dub version, “The Longer Way” aka “All The Way”, is also very surreal. The Ethnic label issued “Mumbling And Grumbling”, a Lee Perry production certainly, but the vocals on this sound very rough. Some very well arranged horns and background vocals really make this tune.

Around 1974, Lee ‘Scratch’ Perry had been working on a second album from Junior Byles. The two new tracks, “Fun And Games” and “Pretty Fe True” aka “Pretty Baby” along with “Curley Locks” and “The Long Way”, would have probably been on it. Unfortunately that second album never saw the light of day. The rare “Pretty Fe True” is a wonderful creation, that comes across a powerful riddim which is balanced by some cleverly distorted horns into which he sings his happy love song. On “Fun And Games” he revisits “A Matter Of Time” from the “Beat Down Babylon” set; it quickly turns into a dub where it works just as well.

Junior Byles moved away from Lee ‘Scratch’ Perry in the mid-1970s and started to record for other producers including Lloyd Campbell, Pete Weston and Joseph Hoo Kim. For the latter he recorded “Fade Away” at Channel One which became a massive hit in Jamaica and was also a big success in the UK. For Pete Weston he recorded a second album titled “Jordan” in 1976. However his mental health had begun to decline and he often struggled to maintain basic living standards. At the end of 1976 he had all but vanished from the music scene. Although he occasionally resurfaced, it lasted until 1986 before he returned with his third album, “Rasta No Pickpocket”, which was released by US-based Nighthawk Records. Two full length albums from one of Jamaica’s most potent talent maintain unreleased; one for Morwell Esq (announced after the 1982 released 12″ singles “Don’t Be Surprise” and “Better Be Careful”) and one produced by Roy Cousins.

This superb double cd is a landmark release, fully doing justice to an artist whose singing and songwriting talents simply can’t be underestimated.

Conclusion Should be added to any reggae fan's collection as this is an essential release!