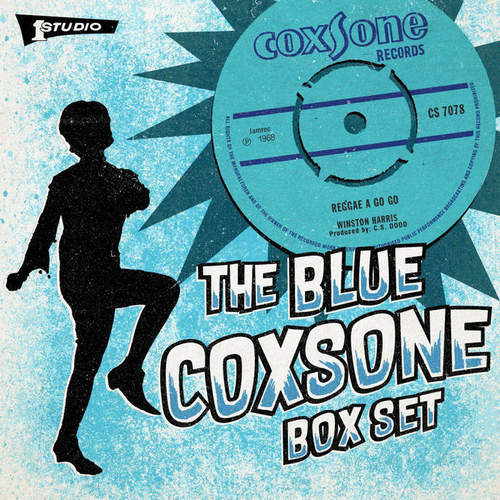 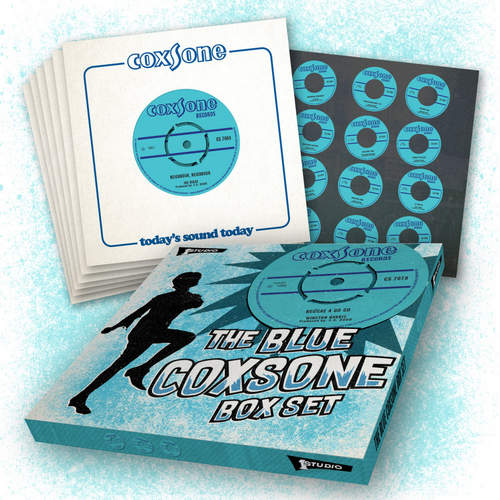 Studio One, the legendary Jamaican label founded by Clement Seymour Dodd that sparked the careers of Bob Marley, Alton Ellis, Jackie Mittoo and dozens of other reggae luminaries, have released thousands of great and essential reggae classics over its six-decade long history. Besides the recordings that were released, it’s commonly known that there’s much more music lying on the Studio One shelves that hasn’t been released yet.

In 2017, Studio One in collaboration with Yep Roc Music Group put out a massive box set with fifteen rare Studio One singles titled “House Of Joy”, which is now followed by “The Blue Coxsone Box Set”. This box set – limited to 1,000 copies worldwide – features six rare singles all reproduced on the original Blue Coxsone imprint (named after Studio One founder Coxsone Dodd). One of them is the long-lost Blue Coxsone single that features Sound Dimension’s “Walk Don’t Run” b/w Trevor Clarke’s “Giving Up On Love”. The crackle-free vinyl singles in this box set furthermore contain tunes from Joe Higgs, Winston Jarrett, The Melodians and other Studio One icons.

Joe Higgs, often called the ‘Godfather of Reggae’, was a popular artist in Jamaica for four decades and is also known for being an important mentor for younger artists including The Wailers and Jimmy Cliff. Released in 1967, “Neighbour Neighbour” by Joe Higgs is a pounding interpretation of the Jimmy Hughes’ 1966 soul classic “Neighbor Neighbor” – originally a single by Charles Berry released in 1964. On the flipside there’s the nice sounding “I Should Have Made It Up”, one of the first recordings The Melodians did after Ken Boothe had introduced the group to Coxsone Dodd in 1966. Both tunes on this single reflect the shift from Ska to Rocksteady.

Studio One’s house band Sound Dimension (previously named The Soul Vendors) was formed in 1967. They were named after a piece of studio equipment called the Sound Dimension. Probably their most famous riddim is the 1967 recorded “Real Rock”. Here they are present with a nicely done version of The Ventures’ international hit “Walk Don’t Run”, originally done by jazz guitarist Jimmy Smith in 1954. On this single the Sound Dimension piece is backed by Trevor Clarke’s excellent lover’s lament “Giving Up On Love”, which originally was paired with Roy & Enid’s “Rocking Time” on a blank label.

The thoroughly entertaining “Reggae A Go Go” by Winston “Taw” Harris (credited to Lord Greene in the UK) is an ultra rare Studio One piece from 1968. According to the singer he wrote this tune as “Rocksteady A Go Go”, but Coxsone wanted to catch the hot new Reggae train and so changed it up and it is, in fact, the first Studio One track to use the word Reggae. The flipside features the lovely “Unfaithful Baby” by Lord Creator, who began his career as a Calypso singer. Some time in the mid-to-late ’50s he arrived in Jamaica, just as the music scene was starting to take off. Lord Creator’s smooth, honeyed tones were not ideal for the raucous jump to R&B soon to emerge from Ska, but as a big band crooner in Jamaica, he had no equal.

The next single contains two great early Reggae stompers by Zoot Simms (also credited to Zoot Simms & Elmond). The song “Tit For Tat” was released with John Holt’s “Fancy Make Up” on the other side, while the lovers piece “We Can Talk It Over” was possibly only issued with a blank B side – but also issued with Sound Dimension’s “Jamaica Bag” on the flipside.

The A-side of the last single in the box features the fantastic “Wreck Up A Pagan Heart” by Winston Jarrett & The Righteous Flames, which came on a rare 1969 JA blank backed by Keith Balfour’s “Sweet Dreams Of You” and the Muzic City stamp on that side. Here the Winston Jarrett piece has The Madlads’ wonderful early Reggae tune “Losing You” on the other side.

Conclusion A must-have box set for all collectors.