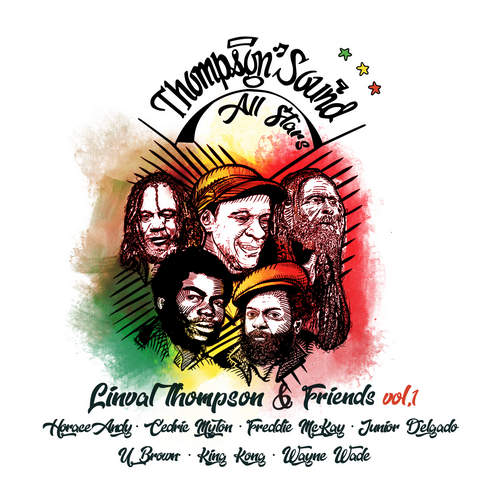 Linval Thompson, in collaboration with Roberto Sánchez from A-Lone Productions and Baco Records, has put out the compilation set “Thompson Sound All-Stars: Linval Thompson & Friends Vol. 1”, featuring 12 tracks that demonstrate what a good and interesting producer the veteran singer was during the golden age of reggae (late ’70s/early ’80s). This selection truly highlights the importance of Linval Thompson as a producer and shows why he was one of the strongest rivals of the highly influential Henry ‘Junjo’ Lawes, the most successful Jamaican record producer in the early 1980s, with whom he had first ventured into production in 1978.

This superb collection features great reggae classics, including two previously unreleased songs by Horace Andy and U Brown, and is a must for fans and collectors of early dancehall. Producer Linval Thompson, who also contributes two songs, gets great performances from Horace Andy, Freddie McKay, and Wayne Wade in particular. The tunes delivered by Cedric Myton, Junior Delgado, King Kong, U Brown and Linval Thompson himself, match these in dancehall vibes.

Gathered here are prime cuts from a number of respected Jamaican reggae artists as well as a few rare mixes and wicked heavy dub versions. The solid opener “Crystal Ball”, previously released on 7″ vinyl and credited to The Congos, features the sweet, smooth falsetto of Cedric Myton coming on Johnny Clarke’s “Ride On Girl” riddim – in 1977 produced by Bunny Lee. Horace Andy’s tune “River” appears here for the very first time as it has never been released before. It’s followed by Freddie McKay’s extended mix of “Guide Us Jah Jah”, a heavyweight roots killer which came out in 2019 on 12inch with Al Campbell’s “Unfaithful Children” on the flipside. Another 12inch released in 2019 featured the previously unreleased extended mix of Linval Thompson’s great “Jumping For Joy”, which was first heard on his album “Follow My Heart” from 1980.

The Junior ‘Jux’ Delgado comes up with the wicked lovers piece, “Loving You Girl (Is Always On My Mind)”, which is followed by its dub version “Loving You Dub” with the vocals going in and out of the mix. On the label of the GG Records release the name of Henry ‘Junjo’ Lawes appears as the producer. This could make sense as it was also released on the Jah Guidance label in the US. King Kong nicely rides the “Dreadlock Nah Run” riddim for “Who Say”, while Wayne Wade’s big anti-war, political and social commentary “(Down In) Iran” has all the perfect ingredients to pack a punch. Horace Andy shines on the 1979 released “Jah Provide”, which comes across a relick of Studio One’s classic “Real Rock” riddim, and is followed by Scientist’s “Jah Provides Dub”. Linval Thompson’s second tune “So Long” is a solid sufferer’s song worth hearing. The compilation ends with “Roots Is Roots”, U Brown’s wicked deejay version of Freddie McGregor’s “Rootsman Skanking” (from the “Big Ship” album) – with Freddie’s vocal featured in the mix.

Conclusion This album contains some of the best from Linval's Thompson Sound imprint!