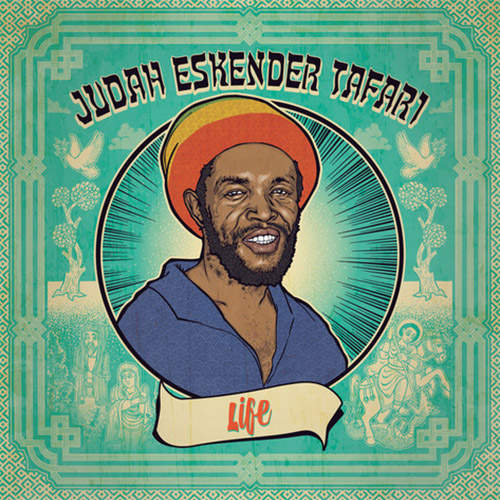 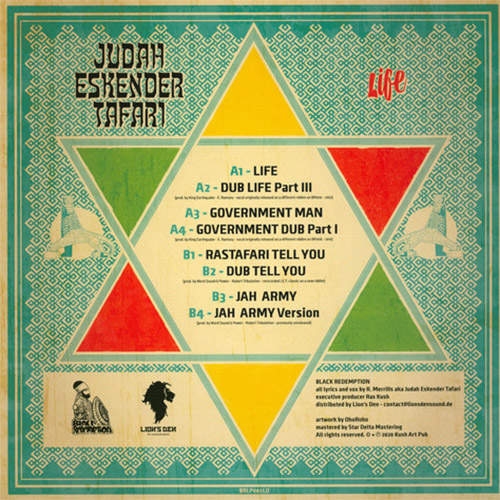 Although Judah Eskender Tafari recently passed on the Zion, his music will live on forever and will always have a special place in the hearts of reggae connoisseurs and his longtime fans. Ras Kush and his Black Redemption label from New York City have released a special project of two seperate vinyl LPs that has been a long time in the making. Both albums, “Divine Right and “Life”, are so-called ‘Showcase’ albums with the vocal cut being directly followed by its dubbed up version. This format, emerging in the late 1970s, was particularly useful when a producer was short in material of the artist in question.

Al Campbell’s 1978 released LP on the DEB label was probably one of the first album that was titled “Showcase”. In the years that followed, albums with that title were released by artists such as Black Uhuru, Barry Brown, Horace Andy, Jackie Mittoo, Sugar Minott, Gregory Isaacs, Ini Kamoze, and Wayne Jarrett, although not all of these albums contained dub versions. In recent times the ‘Showcase’ format – with the dub versions included – came back in fashion, with the format most notably utilized by esteemed Spanish producer Roberto Sánchez.

While the tracks on “Divine Right” were handled by Russ D, Jonan Dan and Mighty Massa, the pieces on the “Life” album come from the capable hands of the mighty UK Sound System men Errol Arawak aka King Earthquake (A-side) from the respected roots & dub UK sound system out of Birmingham, and Robert Tribulation aka Word Sound & Power (B-side) from West London. Hardcore fans of the UK Sound System scene will be delighted to hear the different approaches of these experienced veterans.

The album opener and title track “Life” was originally released on a different riddim. Together with its dubversion, which was done by Mighty Massa, it was released on a Black Redemption 10″ vinyl single in 2007. The King Earthquake version of the vocal cut, which is great to hear, is underpinned by a hypnotizing Steppers riddim, while “Dub Life Part III” is a great example of the digital dub culture Errol Arawak has been part of for so many years. Just like “Life”, the next song, “Government Man”, originally came across a different riddim on a 2010 released 10″ vinyl platter. The vocal and dub featured on that release was engineered & mixed by Russ D (Disciples) at Backyard Studio. “Government Man” fully equals “Life” in terms of appeal and overall quality. For “Government Dub Part I” all stops have been pulled out to create a truly mind-blowing killer dub.

After he had recorded “Jah Light”, “Rastafari Tell You” was the second original song Judah Eskender Tafari did for Coxsone Dodd during the same session in the late 1970s. Since then the deep roots vocal has been revisited by Gussie P, which afterwards wan’t to the liking of Judah Eskender Tafari, and most recently by Erin Wilcox of Rhygin Records for the “Long-Suffering” album. Robert Tribulation was given the hard task to come up with a worthwhile next version and he surely did a good job on both the vocal cut and the dubbed up piece. He re-recorded this classic tune on a new riddim and it works very well. “Dub Tell You” is a heavyweight effort with an emphasis on the drum & bass and the echoing vocal going in and out of the mix. Just like on the “Divine Right” LP, there’s only one exclusive tune included here. “Jah Army”, and of course also its version, hasn’t been released before. It’s a huge roots tune performed in Judah Eskender Tafari instantly recognizable style with cultural lyrics to match. “Jah Army Version” incorporates a few dub effect, but in essence it’s more intended to display the beauty of the riddim.

Together with “Divine Right”, this album is great tribute to Judah Eskender Tafari. Both LPs shouldn’t be overlooked by the avid roots reggae fan.