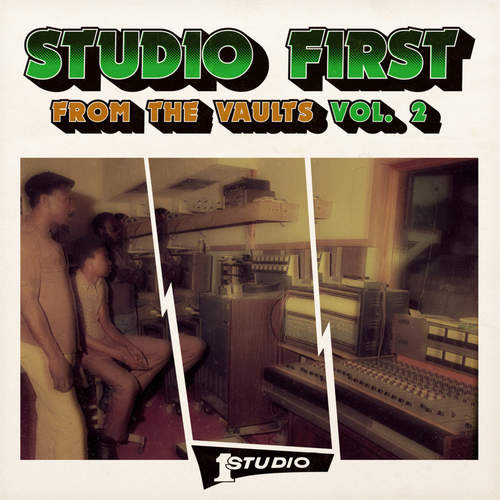 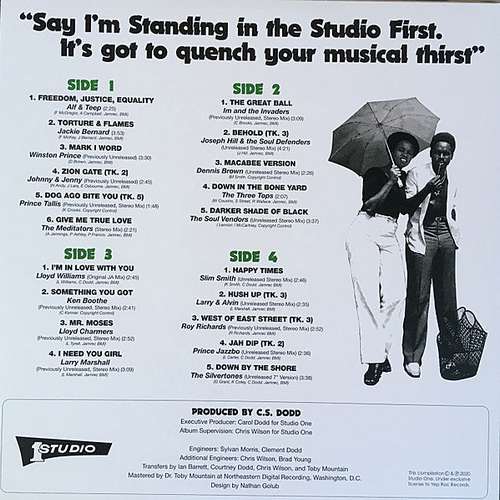 Studio One, the major label and the generic title for all Clement Seymour Dodd productions, has been one of Jamaica’s most prolific recording labels for more than sixty years. By many regarded as the ‘Motown of Jamaica’, the record label and recording studio was involved with most of the major music movements in Jamaica during the 1960s and 1970s, including ska, rocksteady, reggae, and early dancehall. It sparked the careers of The Wailers, Alton Ellis, Jackie Mittoo, Dennis Brown, John Holt, Horace Andy, The Heptones and dozens of other reggae luminaries, and released thousands of essential reggae classics. But it’s also commonly known that lots of recordings, even complete artist albums, have never been released. Hopefully there’ll come a time that the unreleased albums, like for example the one from Judah Eskender Tafari, are made available for the avid fans.

From the Vaults Series

In 2017, Studio One in collaboration with Yep Roc Music Group, released an 18 track bonanza of rare sides titled “The #1 Sound: From The Vaults, Vol. 1”, which was released for Record Store Day Black Friday and reached #1 on the Billboard Reggae Chart, selling out on vinyl immediately. And now, three years later there’s the second installment of Studio One’s “From the Vaults” series – again released for Record Store Day. “Studio First: From the Vaults, Vol. 2” is a collection of 20 Studio One rarities that are either entirely unreleased or available for the first time on a compilation set.

The first track on this compilation was only issued in the UK on a FAB blank in 1971 and never released in Jamaica. “Freedom, Justice & Equality” is an absolutely beautiful Studio One rarity performed by the duo Alf & Teep, who actually are Freddie McGregor and Al Campbell. These two artists were very close back in the early 1970s, which explains why they recorded this tune as Alf & Teep for Coxsone Dodd. The B-side of this rare single featured “Down In The Bone Yard” aka “Bone Yard” by Jamaican vocal trio The Three Tops, a solid song which is also included on this set. Another single issued in the UK on a FAB blank and in Jamaica on Muzik City Records is Jackie Bernard’s superb 1970 tune “Torture & Flames” across the riddim of Freddie McKay’s “Picture On The Wall”. Next comes the unissued deejay cut “Mark I Word” by Winston Prince, who achieved a giant breakthrough in 1978 with his LP “Best Dressed Chicken In Town” under his well known alias Dr. Alimantado.

The next two tracks, Johnny Osbourne & Jennifer Lara’s “Zion Gate” across the “Fever” riddim and Prince Tallis’ “Dog Ago Bite You”, are true winners. While Johnny Osbourne and Jennifer Lara became well known names amongst reggae aficionados, Prince Tallis remained a rather obscure artist. The Mediators’ real fine “Give Me True Love” appeared on the Coxsone Dodd produced LP “Boss Reggae”, which came out in the UK on Pama Records’ subsidiary label Economy in 1969. Next comes “The Great Ball” by Cedric Brooks aka Im & The Invaders, an instrumental scorcher worthwhile hearing and so, of course, is the roots killer “Behold” by Joseph Hill & The Soul Defenders. Then a young Dennis Brown delivers the nicely performed “Macabee Version”, a rare Studio One cut of Max Romeo’s song which was only released in the US on Tranquility Records in 1971.

Released in 1968 on the flip of The Gaylads’ “Peculiar Man”, the Soul Vendors’ “Darker Shade Of Black”, an instrumental interpretation of The Beatles’ “Norwegian Wood (This Bird Has Flown)”, is one of those Studio One classic riddims that has been relicked time after time. With “I’m In Love With You”, great singer Lloyd Williams masterfully delivers an entirely delicious mid-tempo Jamaican soul piece that creeps under your skin and into your heart. Featured here is the original JA mix without the heavy duty strings that were added for the UK release. More Jamaican soul is offered by Ken Boothe, who’s known for his distinctive vibrato and timbre. His previously unreleased song “Something You Got” is a lovely lovers piece. Singer, keyboard player and record producer Lloyd Charmers, who started his professional career in 1962, delivers the heavenly song “Mr. Moses”, one of the many highlights of this compilation.

Larry Marshall started out recording for producers such as Philip Yap (“Promise Is A Comfort To A Fool”), Coxsone Dodd (“Please Stay”) and Prince Buster (“I’ve Got Another Girl”), but had his breakthrough with the massive Jamaican hit “Nanny Goat”, a tune recorded together with Alvin Perkins at Studio One in 1968. Included on this set is a solo cut, the totally enjoyable “I Need You Girl”, and another great duet he recorded with Alvin Perkins in 1968 entitled “Hush Up”. One of the greatest voices out of Jamaica, Slim Smith, got his start in the early ’60s with producer Coxsone Dodd, working both as a solo act and as part of the vocal group the Techniques. His powerful and singular voice graced many great classic songs including the rocksteady classic “Happy Times”, which was released on a 7″ single in 1968 and then appeared on the singer’s album “Born To Love”. Roy Richards, blind since birth, emerged in the late ’50s as a reggae vocalist and harmonica player. On “West Of East Street”, a nice instrumental interpretation of Eydie Gormé’s pop hit “Blame It On The Bossa Nova”, he expertly plays the harmonica. The listener is then treated to classic deejay business with Prince Jazzbo riding the “Ten To One” riddim for one of the deadliest tunes he recorded for Coxsone Dodd, “Jah Dip”. Great harmony trio The Silvertones rounds off with the lovely “Down By The Shore”.

“Studio First: From The Vaults, Vol. 2” is a true collector’s dream. The compiler of this set has been digging deeper in the vaults of Studio One than was done for the equally excellent first volume.​

Ken Boothe – Something You Got

Prince Tallis- Dog Ago Bite You

Conclusion This Studio One collection is a true collector's dream!