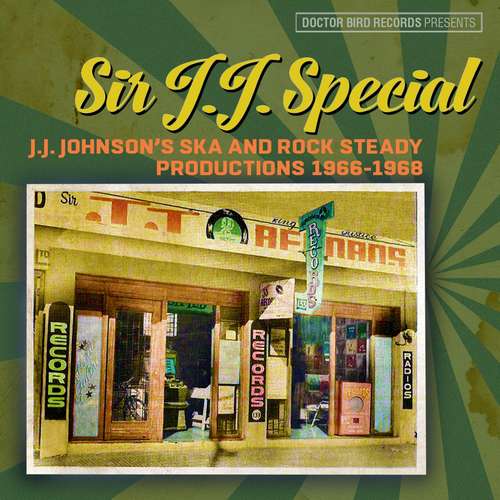 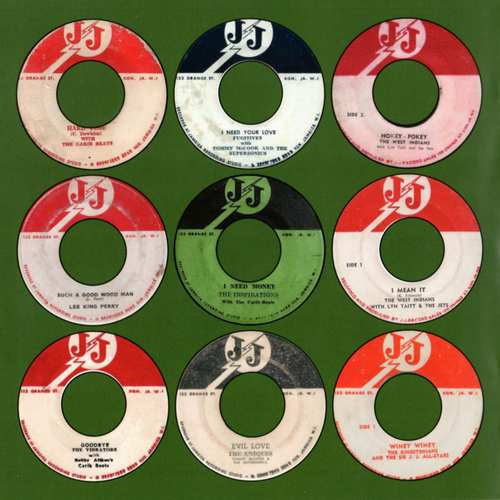 A consistently successful record producer in the 1960s and early 1970s was Karl Johnson aka Sir J.J. Johnson. Being a business-minded person, he became one of Jamaica’s main jukebox suppliers. In the mid-1960s he chose to direct his attention to the burgeoning Jamaican music industry and started to run his own Sir JJ and JJ Records labels from his Kingston shop on 133 Orange Street (next door to Leslie Kong’s Beverley’s Records), where he was shot to death in 1972. The precise circumstances surrounding his tragic death are still a mystery. More of a businessman than a music person, he left the mechanics of production to the recording engineer and the musicians (mostly Bobby Aitken & The Carib Beats aka The JJ All Stars and then also Lyn Taitt & The Jets), but he displayed a sure touch in deciding what to release. Although Sir J.J. was up there with the top producers, he truly deserves to be celebrated more widely.

Sir J.J. left a considerable catalogue of great music from the late-ska and rocksteady eras right into the reggae era. In the rocksteady era The Rulers and Carl Dawkins were without doubt the biggest acts on his label, bringing Sir J.J. some great music and some big hits. The hits continued throughout the rocksteady era, with The Kingstonians and Eric Donaldson’s West Indians joining J.J. Johnson’s small, but popular roster of acts. Then, between 1968 and 1970, it were The Ethiopians, who recorded a series of great tunes for him, which remain a high point in the history of Jamaican vocal groups. The Ethiopians aren’t featured on this compilation, but their work for Sir J.J. can be found on the highly recommended 2018 released cd “Reggae Power/Woman Capture Man”, which also has been put out by Doctor Bird/Cherry Red Records. Sir J.J. not only had some great artists in his camp, he also had a totally different sound. The basslines heard on many of his productions are some of the wildest to come out of Jamaica!

Sir J.J., a tall slim young man of very few words, enjoyed significant success with The Rulers (“Copasetic”), Carl Dawkins (“Baby I Love You”), The Kingstonians (“Winey Winey”), Eric Donaldson & The West Indians (“Right On Time”), and The Kilowatts (“Bring It Home”). All of them are great tunes with strong riddims and are, of course, featured on this whopping 56-track compilation. Besides the aforementioned names of artists on the album’s tracklist, this set furthermore features tunes from Earl Lowden & The Fugitives, The Uniques, The Vibrators, The Viceroys, Lee ‘King’ Perry, and David Isaacs. Going through the entire list of names it’s obvious Sir J.J. primarly favoured groups over solo singers. However, he didn’t limit himself to just recording them. It was soulful singer Carl Dawkins, who became his highest profile male vocalist after he had recorded his first tune, “I Won’t Give In”, for Sir J.J. in 1967. That tune plus six others, which include great tracks like “Baby I Love You”, “Hard Time”, and “Running Shoes”, are featured here.

Of particular interest are the recordings of The Uniques, The Viceroys and David Isaacs. The Uniques, at the time of recording the fast ska tune “Evil Love” for Sir J.J, consisting of Slim Smith, Roy Shirley and Franklyn White, had the soon-to-go-solo Roy Shirley doing the lead vocal. The song may have been recorded at Studio One, albeit Treasure Isle’s in-house band Tommy McCook & The Supersonics rather than Studio One’s band of the day, Soul Brothers, playing on this record. Although no labeled copy has ever turned up, it are most likely The Viceroys, founded by Wesley Tinglin with Daniel Bernard and Bunny Gayle in the mid-’60s, who recorded “Man Free”, “Nosey People” and “Innocent Man” for Sir J.J. prior to recording their first song “Lose & Gain” for Studio One in 1967. Their song “Man Free”, done in the same vein as Prince Buster’s popular single “Judge Dread” b/w “The Appeal”, is great to listen to and so are the other two, also extraordinary rare tracks. The single “Soul Food”, Lyn Taitt & The Jets’ superb rocksteady take on King Curtis’ “Memphis Soul Stew”, had “Music Flames” by an uncredited vocalist on its flip side. The unknown singer has be identified as either David Isaacs or Errol Brown, who ran his own Brown Beat label from the US in the early ’70s. It also could have been, but certainly isn’t, the Errol Brown who sang “People Make The World Go Round” with the Chosen Few. Another example of the saying ‘reggae is more mystery than history’.

One of the first Sir J.J. produced was Lee Perry, who at the time was called Lee ‘King” Perry. Most likely his two ska tunes, the great message tune “Give Me Justice” and “The Wood Man”, were recorded at Studio One, however without Coxsone Dodd knowing about it. The Kingstonians, consisting of Cebert ‘Jackie’ Bernard, Lloyd ‘Footy’ Bernard and their friend Lloyd Kerr, started their recording debut for Sir J.J. and became one of his biggest acts. Their here featured ten rocksteady tracks (both sides of five J.J. singles), including the scorchers “Crime Don’t Pay”, “False Witness”, “Put Down Your Fire” and the already above mentioned hit tune “Winey Winey”, were all done at WIRL with Lyn Taitt & The Jets providing backing for the group. The West Indians, formed by lead vocalist Eric Donaldson, Leslie Burke and Hector Brooks, is another interesting vocal trio. Four of their rocksteady songs are included here with “I Mean It” and “Falling In Love” being sublime efforts. Well represented on this compilation are The Rulers, a group, but most likely a duo, of which, despite having scored big hits for Sir J.J., nothing at all is known. Their hit “Copasetic” is featured here, but also “Wrong Emboyo”, which was covered by The Clash and featured on their 1979 album “London Calling”. However, it’s The Rulers’ killer slow early roots skank of “Let My People Go” that impresses most.

The Rulers – Let My People Go

Conclusion The often overlooked producer J.J. Johnson was in urgent need of a serious reissue program and that is now accomplished with the release of this great compilation and the earlier mentioned cd of The Ethiopians.