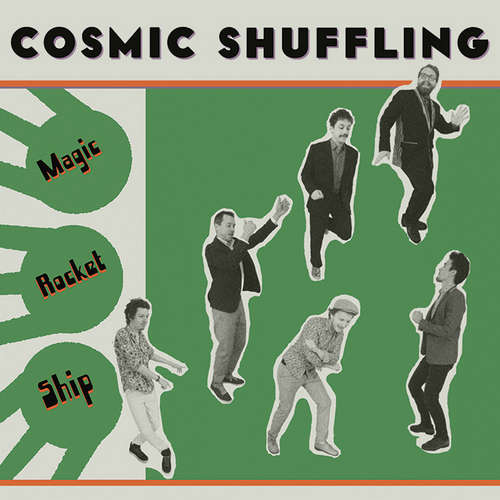 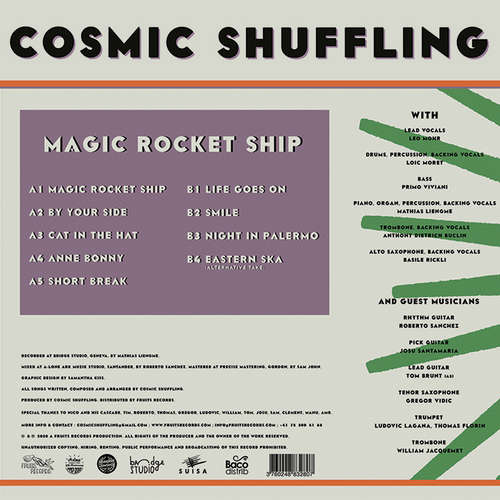 Anyone who follows the European reggae scene will be aware of the goodies that have come out of the Swiss mountains in recent years. Especially the city of Geneva seems to be the reggae hot spot. It’s there that producers and musicians associated with roots reggae label Fruits Records started its noteworthy activities in 2015. They were the driving forces behind album projects with well-respected Jamaican artists like I Kong, The Inspirators, and dub poet Oku Onuora, and released quite a number of 7″ singles from Samory I, Kumar, The Silvertones, Buru Banton, The Viceroys, Time Unlimited, Micah Shemaiah, Keith & Tex, etc.

One of the label’s other projects features the Geneva-based ska and rocksteady sextet Cosmic Shuffling, which got critical acclaim and encountered success in 2017 with their first EP titled “Cosmic Goes Wild”. After this year released two double A-sided singles, Fruits Records has now released Cosmic Shuffling’s first full-length album. From the four tracks released on single, this album only features the instrumental “Short Break” and an alternative take of “Eastern Ska”. The tracks included on this set, all being originals, were recorded in the aesthetics of sixties sound i.e. with ribbon microphones, magnetic tapes, and analog saturation.

The “Magic Rocket Ship” takes off with the infectious horns-laden title track which musically somehow reminds of an Alpheus song, perhaps due to esteemed Spanish producer Roberto Sánchez being involved as a guest musician (rhythm guitar) and mixing engineer. Anyway, the track “Magic Rocket Ship” not only is an earworm but also makes you want to move your dancing feet. The ska tempo slows down and turns into a rocksteady backdrop for the solid lover’s tune “By Your Side”. Then it’s Ska time again with “Cat In The Hat”, which is followed by the head-nodding “Anne Bonny”, a song about a notorious female Irish pirate operating in the Caribbean in the early years of the 18th century. The previously released single, the expertly played rocksteady instrumental “Short Break”, rounds off Side A of the vinyl platter in fine style.

Side B starts in fine rocksteady style with the appealing lover’s piece “Life Goes On”, one of the album’s highlights. Next comes the matching “Smile”, which keeps the rocksteady and lover’s vibe floating. The trombone played on the outro of this song is the icing on the cake. Then two instrumentals make the flip side of this LP come to an end. First, there’s the swinging perfection of “Night In Palermo” that will surely make you jump and twist. “Eastern Ska” sees the horns play an important role. It are the solo parts by Basile Rickli on alto saxophone and William Jacquemet on the trombone that perfectly complement the mighty riddim section, the brass riffs, and instrumental composition.

Conclusion This album is likely to please both aficionados and novices.