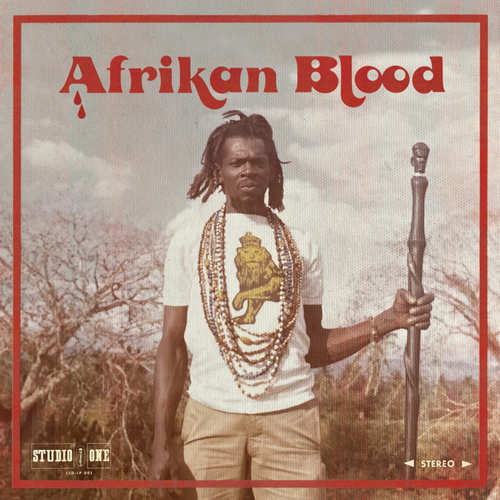 ​It doesn’t matter whatever music genre you favor, there’s always something of interest to buy at the 2008 started annual Record Store Day. It’s an event that many collectors have marked in fat red on their calendars. The beauty of this event is the number of records (vinyl as well as cd) that are pressed specifically for this day. Also Studio One, in collaboration with Yep Roc Music Group, comes up with a special release for the last Record Store Day of 2020, the 14-track compilation set Afrikan Blood. Made up of six tracks never before released, five tracks for the first time available on a vinyl LP, and three tunes being previously unreleased stereo mixes, it’s obvious the Studio One aficionado is served very well.

The first track, Al Campbell & Freddie McGregor’s outstanding Born A Free Man from 1971, is a true gem. On this much sought after single Al Campbell is the lead vocalist, while young Freddie McGregor harmonizes. Great to have this tune finally available on a Studio One compilation. Judah Eskender Tafari’s Afrikan Blood is another track the singer’s fans and Studio One collectors have been eagerly waiting for, especially because he has been talking about this and other tunes he recorded for his – still unreleased – full-length Studio One album Afrikan Blood in some of his interviews. The song Afrikan Blood is one of this compilation’s highlights. It’s followed by the matching The Lion Has Returned by Lloyd Anderson, a rather unknown singer whose tune is a joy to listen to.

The Gaylads, a vocal group founded by B.B. Seaton in the early ’60s, is present with I Am Free, which is a superb rocksteady song from 1967. Alton Ellis & Zoot Sims make a serious impression with their deep roots piece titled We’re Gonna Climb. The Wailing Souls’ festival song Hooray (It’s Festival Time) is a nice inclusion. Then there’s The Viceroys’ Rasta Leaves His Footprints, which is another highlight. Next comes more niceness with The Willows’ killer heavyweight roots tune Send Another Moses. Sweet-voiced Dudley Sibley leaves a good impression with his 1972 roots piece Love In Our Nation, performed over a great riddim played by the Soul Agents. This Afrikan Blood compilation is then rounded off by another winner, Larry Marshall’s Freedom Song.

For this Record Store Day release, the compiler has delved deep into the extensive vaults of Studio One, and the result is a marvelous set that features enough rare and classic tunes – including previously unreleased ones – to make this an essential addition to anyone’s reggae collection.

Conclusion This is a marvelous set that features enough rare and classic tunes, which makes this an essential addition to anyone's reggae collection.