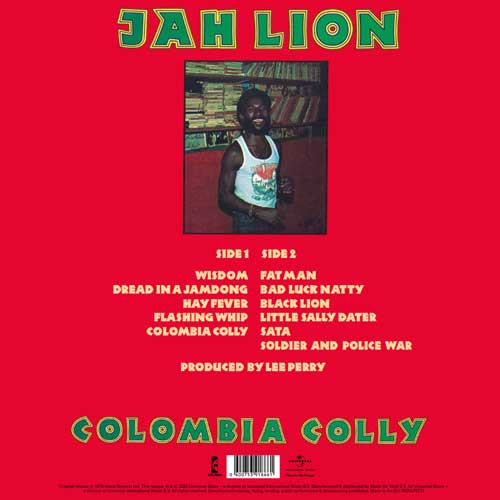 Patrick Francis is also known as Jah Lloyd, Jah Lion, The Black Lion of Judah, and Jah Ali. His nicknames are a reference to his Rastafarian principles, as he adopted the Rastafarian faith in 1970. As a youth, he moved to Kingston where he started singing in a group called The Mediators. In 1974 he established the Teem record label. The input of dub inventor King Tubby greatly influenced the quality of his excellent productions. He worked a lot with percussionist Bongo Herman, with whom he recorded several wicked sides like Soldier Round The Corner. As a result of his close relationship with The Mighty Diamonds, he recorded a killer deejay cut, with Bingy Bunny, on the Mighty Diamonds’ tune Shame And Pride, called Killer Flour. The song was a bitter commentary on the poisoned flour scandal from early 1976. The undisputed high point of his career came in 1976 when he and Lee Perry, who changed Lloyd’s name from Jah Lloyd to Jah Lion, released the album Colombia Colly. His most creative years were the 1970s, and he continued to record on an irregular basis after that. He died a penniless man in 1999.

Lee Perry was at the height of his musical skills in the mid-1970s with releases by Max Romeo, The Heptones, Junior Byles, and Junior Murvin, among others. The album Colombia Colly is a quintessential Perry production of the time, and sees Jah Lion in a militant, but also spiritual mood. After so many years, and several re-releases, this album is no stranger to the fans. The nice thing about this re-release from Music On Vinyl, is the addition of the bonus track, Soldier And Police War, an awesome version of Junior Murvin’s all-time classic Police And Thieves.

Music On Vinyl, the Dutch vinyl-only reissue label, has already earned respect in the reggae scene with nuff superb vinyl reissues of classic albums. Check out Bob Andy’s 1978 album Lots Of Love And I, The Uniques rocksteady album Absolutely The Uniques!, Gregory Isaacs Out Deh!, The Heptones 1976 set Night Food and Pablo Moses’ Pave The Way. Further interesting sets are Lee Perry’s Scratch The Upsetter Again and the recent We Must Unit by The Viceroys.

The deep religious opening track Wisdom uses the inimitable riddim of Anthony ‘Sangie’ Davis’ 1973 song Words Of My Mouth, followed by Dread Ina Jamdong, another religiously tinged song on a compelling riddim later used by Thomas White and Devon Irons. On Hay Fever, his version of Susan Cadogan’s hit Fever, he makes clever use of the vocal snippets of the original. The riddim of Flashing Whip is found on various Upsetters instrumentals, such as Kentucky Skank, Washroom Skank, Bathroom Skank, but there is also a version of Jah Lloyd himself, The Lama (aka The Spiritual Whip). The title track is a fascinating herbal anthem, carried by a ‘dreamy’ riddim.

Fat Man is of a different order. It’s Jah Lion’s answer version to Carl Malcolm’s massive hit Hey Fatty Bum Bum from 1975. Bad Luck Natty is one of several excellent deejay releases across the Cloak And Dagger aka Dub Organizer riddim. Black Lion is a moving cultural themed song, underpinned by an organ-driven riddim, first used in 1975 for What Can I Do by Locks Lee, which in turn is a version of Donnie Elbert’s 1950s soul hit of the same name. Little Sally Dater is Jah Lloyd’s own Soldier Round The Corner riddim from 1974 with snippets of Have Some Mercy in the background. Sata is Black Ark’s version of the Satta riddim, one of reggae’s most used culturally inspired riddims.
Lee Perry’s strong riddims, in combination with Jah Lion’s roots & reality themes and his memorable style of toasting, remain a deadly combination even after so many years.

Conclusion Needless to say that this one's a crucial reissue!