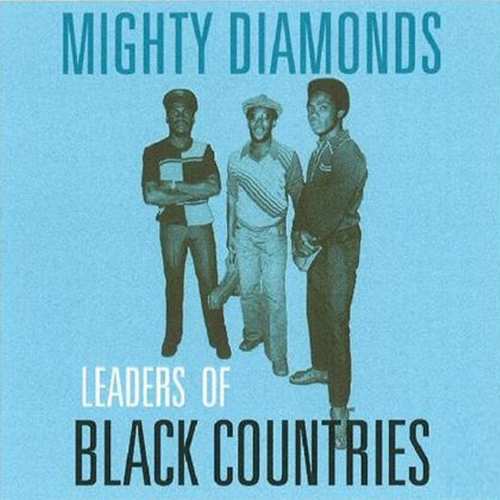 The legendary Mighty Diamonds, comprising lead vocalist Donald “Tabby” Shaw and harmony and occasionally lead singers Fitzroy ‘Bunny’ Simpson and Lloyd ‘Judge’ Ferguson, are one of the few classic vocal groups to have survived for about 50 years with the same original line-up since this outfit was formed around 1968. After having recorded unsuccessfully for a number of Jamaican producers including Rupie Edwards their major breakthrough came when they teamed up with Channel One’s Joseph Hookim who produced the group on a series of hits, leading to a contract with Virgin Records in 1976. With albums like Right Time, Deeper Roots, Stand Up To Your Judgement, and Changes, the Mighty Diamonds made a serious impact and deservedly took their place in the forefront of reggae music for many years.

A hard-to-find classic from 1983 before it was reissued on CD & LP in 2011 by Kingston Sounds, Leaders Of Black Countries is available now for the first time on all digital platforms. Instead of sticking to the tracks of the original LP release (a Showcase album), this is the version put out by Kingston Sounds, which implies that there are bonus tracks included. This release features ten of the twelve original tracks – six vocal cuts and four of the six dubs. Added are Do You Want To Spend The Rest Of Your Life Wasting Time, which actually is Carefree Girl from 1975, Pirates (DJ Version) featuring Tullo T aka Papa Tullo, the 1970s recorded Mother Winney, and from the 1990s Don’t Burn Your Bridges and Please Be Fair.

This album, with productions from Joe Gibbs, Gussie Clarke, and Tappa Zukie, features musicians such as Lloyd Parks, Sly & Robbie, Santa Davis, Willie Lindo, Dean Fraser, Winston Wright, and Robbie Lyn. Mighty Diamonds are captured in very fine form on this entertaining selection of rootsy reggae. Their wonderful harmonies are tight as always and the self-written vocal tracks fully display their ability to write catchy, meaningful songs. Prime examples of this are the crucial opener Morgan The Pirate, which is a musical history lesson, the fantastic title track Leaders Of Black Countries, and the heavy Rude Boys aka Bad Boy. In all, a great way to start this album. Unfortunately, the high-quality standard set by the first three songs isn’t maintained throughout, but luckily there are no weak tunes around. More than worth hearing is their version of Dennis Brown’s No More Will I Roam, Mr. Brown (not the Gregory Isaacs tune), and Who’s Sorry Now.

Listen To The Full Album

Conclusion A solid album from one of reggae's finest vocal groups.