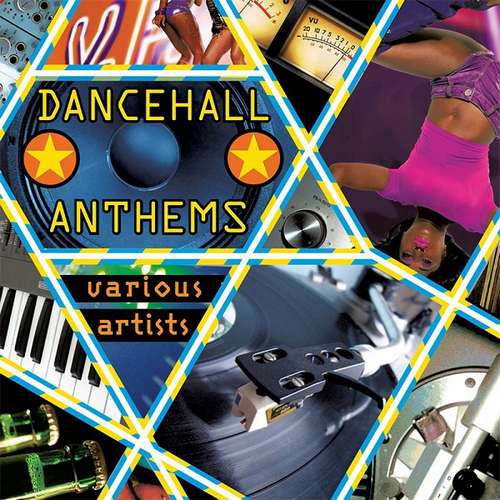 Greensleeves, Jet Star, and VP Records, all three influential reggae/dancehall labels from the past and present, except for the no longer existing Jet Star, have included several interesting series in their catalog. Remember Reggae Hits (Jet Star), Reggae Gold & Strictly The Best (VP), and Reggae Sampler & Ragga Ragga Ragga! (Greensleeves). When we heard about the new VP album Dancehall Anthems, we silently hoped that this would be the start of something really exciting! At the moment only one album has been released, but who knows what the future will bring!

Listen to Jeremy Harding: “Originally, this was going to be a VP Records 40th anniversary project, but it expanded, as I wanted to pay tribute to the history of dancehall in the broadest sense, reconsidering iconic songs and particularly the roots of the genre, including what played heavily on sound systems when I was growing up. I wanted to give the artists, new and veterans, the chance to put their spin on these classics.” Clear, isn’t it? Thirteen songs culled from Jamaica’s musical history, revisited and edited by veteran dancehall producer Jeremy Harding and a selection of contemporary artists. As both producer and manager, Harding was a major influence on the career of Sean Paul, one of the great dancehall stars.

Without a doubt, this is a delightful trip down memory lane with well known, strong classics performed by talented newcomers and some veterans in the business. Beenie Man is really on a roll with Mad Kings, it’s his over the top version of Yellowman’s Zungguzungguguzungguzeng. Kabaka Pyramid obviously cannot go wrong with his reading of General & Smiley’s Nice Up The Dance. Agent Sasco dares to give one of the biggest sound-clash dubplates of all time, Dust A Sound Bwoy, a new, powerful look, and we like it…respect Super Beagle! The aforementioned Sean Paul ‘rewrites’ Tiger’s hit Puppy Love into a tasteful ode to marijuana. Pass the chalice!

The still popular Tenor Saw is honored here by Wayne Marshall who performs one of his strongest tunes, Lots Of Sign, without modifications, just a straightforward version. In the 1990s Louie Culture set the dancehalls on fire with his hit Ganga Lee. It will be hard for Bugle to repeat Louie’s success, but his version is certainly appreciated by us. Two female artists join in this ‘cover’ battle. Ikaya brings with Sorry a laudable version of Tracy Chapman’s original, not much different from Tracy’s. The reggae massive can compare this version nicely with the well-known versions of Foxy Brown and Sanchez. Then there’s the beautiful Naomi Cowan with Splashing Dashing from Garnet Silk, the still-missed singer who died when he tried to rescue his mother from a fire. It’s a beautiful restrained, yet exciting version, in which she floats effortlessly over the Death In The Arena riddim, truly impressive and worth playing several times.

Conclusion Respect to Jeremy Harding for this entertaining album!