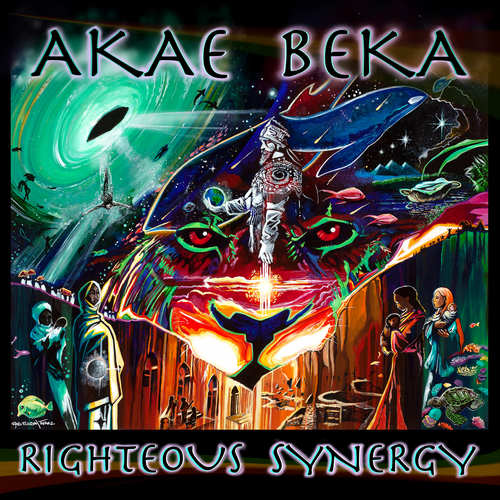 The untimely death of genius singer, songwriter, musician, poet, and thinker Vaughn Benjamin on November 5th, 2019 was a great shock for those reggae fans worldwide whose mind, heart and soul were touched by this reggae icon for two decades. As the frontman of Midnite and Akae Beka, and as a solo artist, he collaborated with many production camps such as I Grade Records, Afrikan Roots Lab, Rastar Records, Rastafaria, Lustre Kings, Zion High Productions, Natural Vibes, Groundbreaking Records, Higher Bound Productions, and Fifth Son Records. Being a high prolific artist with about 75 full-length albums under his belt of which no less than 10 were released in a period of four years with Akea Beka, it’s not a real surprise that new albums from Vaughn Benjamin (Akae Beka) can be released posthumously.

In this case, it’s Taos, New Mexico-based Fifth Son Records that adds a brand new Akae Beka album to its catalogue that already included the Midnite albums Suns Of Atom, Standing Ground & Standing Ground Dub, Momentum, In Awe, and Be Strong, and Akae Beka’s Hommage To The Land. Those who are familiar with these releases will affirm that all these albums have their own individual type of vibes and are of significant quality. And to put it straight away, the new Righteous Synergy set is no exception. There must have been so much chemistry between the artist and producer John Juaquin Wilson, that it was no problem at all to voice enough worthwhile tracks for an album over a three-day-period while Akae Beka was on tour in California in May 2019. Producer Juaquin expressed: “The album was built from musical ideas and inspirations that come into my heart and soul, translated into musical form and from the powerful prayers and knowledge that Vaughn Benjamin brought into organization from his Meditations, study, biblical overstanding and his willingness to share the word, sound and power channeled from the Most High.”

The heavy-hitting Righteous Synergy album contains elements that are known and loved from the previous Fifth Son Records release of Akae Beka, Hommage To The Land, and some other Akae Beka albums. Again it’s full of spiritual vibrations with the artist shining bright with his electrifying vocal style and lyrical proficiency which really touch the mind, heart, and soul of the listener. And then there’s also the sonic appeal of the expertly played subtle riddims which constantly comes to the fore, in essence very rootsy but now and then flavoured with jazzy tones.

When the title track, Righteous Synergy, gets the album started it’s almost instantly clear that this opener is an absolutely scorching piece with the beautiful soft horn parts giving the musical backdrop a nice touch. The meditative and intimate vibe created by the opening track is maintained throughout by the matching Bubble Up, a track of sheer beauty. Next comes Responsible For It, which is less immediately gratifying and requires more time to grow. This however doesn’t go for Manger. From the very first beginning this song, which includes quotes from the bible, grabs you to never let loose again throughout its about five minutes of playing time. One of the album’s most impressive tracks! And also Do My Best with its heavy bassline strikes a chord and is one of the tracks that urges you to push the repeat button. It’s followed by a poignant song titled Became A Queen, which is another truly outstanding effort. Groove Stampede is the second track that simply requires multiple listenings to let it grow on you, and actually the same goes for Covenant Ark. In between there’s the compelling African Liberation Talk, a serious message tune that impresses from beginning to end. The album is rounded off by the gorgeous Spirit Of Love, which has Benjamin Vaughn singing instead of chanting his lyrics.

Conclusion Musically and lyrically this fresh collection of tunes, the fruit of the collaboration between Vaughn Benjamin aka Akae Beka and Fifth Son Records, is excellent. Great to see the sorely missed artist's legacy continued.