Derrick Harriott & The Crystalites – The Undertaker 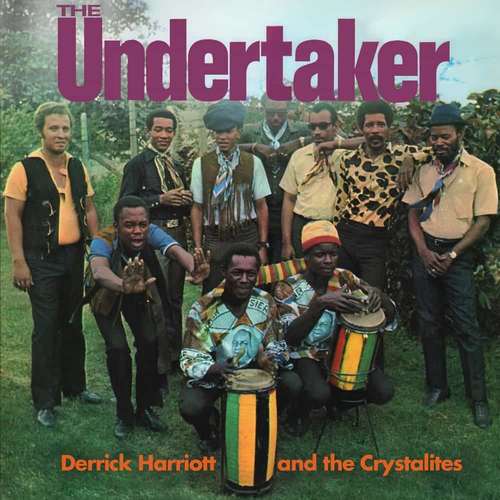 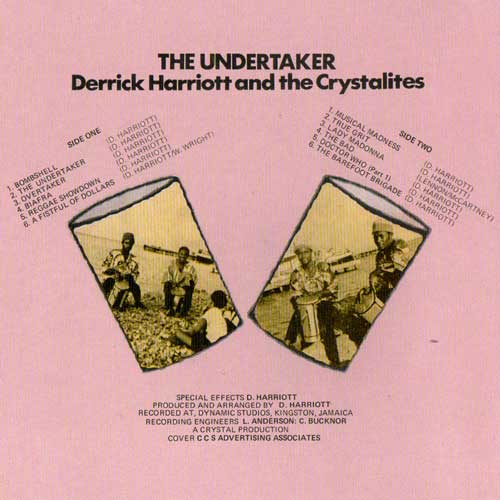 Derrick Harriott & The Crystalites – The Undertaker

Derrick started in the ’50s attending several stage shows. He had already gained experience as a singer in the local church choir. With Claude Sang, he formed the duo Sang & Harriott. When Claude Sang left Jamaica Derrick formed the ska/doo-wop group The Jiving Juniors. They cut some tunes for Duke Reid and Coxsone Dodd. The Jiving Juniors disbanded in 1962 and Derrick set up the labels Crystal Records and Musical Chariot. He quickly scored with singles such as I Care and the Donnie Elbert do-over What Can I Do. Ska started to slow down in 1966 to the more reflective rocksteady beat. That same year Derrick opened his own record shop. He rocked Jamaica with his productions such as Stop That Train by Keith & Tex, Rudy Mills’ Long Story and his own tune Solomon. Derrick scored really big with Walk The Streets, Do I Worry and The Loser. John Jones by Rudy Mills was a major hit in 1968.

He set up his record shop at Twin Gates Plaza on Constant Spring Road in Kingston and continued recording and producing with considerable success, including tunes by the deejay Scotty, The Kingstonians, and Big Youth. He also released two sought after dub sets, Scrub A Dub and More Scrubbin’ The Dub. With these albums, he became one of the first producers to use King Tubby’s mixing talents. With Dennis Brown he recorded the Super Reggae & Soul Hits album. Derrick Harriott helped to shape the rocksteady & reggae sound in Jamaica and is spoken of with reverence by many Jamaican artists.

In the 1960s, ‘shoot’em’up’ westerns such as Django, Fistful Of Dollars, For A Few Dollars More and The Good, The Bad And The Ugly became very popular. In Jamaica, this new western style fitted in perfectly with the prevailing ‘rude boy’ culture. It didn’t take long before Jamaican producers started producing songs inspired by these westerns. These tunes often employed intro dialogues, gunshots, weird special effects and quotes from the movie in question. Derrick Harriott was one of those producers and in 1970 the album The Undertaker was released, containing a number of western movies inspired tracks. The intro dialogues feature Ramon The Mexican, nowadays known as sweet-voiced vocalist Ambelique. Doctor Bird Records, a division of Cherry Red Records, specializes in vintage Jamaican sounds licensed from the legendary catalog of Trojan Records. Now, over 50 years since its release, this classic album is made available once more (as a double cd), with its 12 tracks bolstered by a further 14 instrumental sides from the period, along with a second disc containing 27 Derrick Harriott’s productions from 1969 and 1970.

The Crystalites were Derrick’s studio band since the end of 1967. These top musicians would work for a variety of producers, but under a different name for each producer. For producer Clancy Eccles they worked under the name The Dynamites. The ever-changing lineup included names such as Boris Gardiner, Joe Isaacs, Bobby Ellis, Gladstone Anderson, Lloyd Charmers, Winston Wright, Hux Brown, Vin Gordon, Paul Douglas, and Bongo Herman. With this list of musicians, musical virtuosity is guaranteed. A swinging beat, irresistibly groovy, injections of soul, and crystal clear production characterize the tunes.

Many of the tunes are versions of Derrick’s vocal productions. The Overtaker is the instrumental version of Keith & Tex’s Don’t Look Back, great song! Another instrumental version of this song can be found as one of the bonus tracks. Then we have Bombshell, a furiously swinging tune, that is fueled by Karl Bryan’s saxophone. The same saxophonist shines on Slippery. Biafra was a hit for The Crystalites. The massive reworking of Lady Madonna, the famous Beatles song, is phenomenal. The stomper Reggae Showdown is reminiscent of Lee Perry’s boss reggae tunes. The Barefoot Brigade features vocal snippets by Ramon and the exquisite keyboard playing by Winston Wright.

The bonus tracks on disc 1 starts with an organ version of Ruddy Mills’ biggest hit Short Story. The duo Keith & Tex had several hits for Derrick. Here we find an instrumental version of arguably the greatest hit from Derrick’s catalog, Stop That Train as Stop That Man. Their other hit, Tonight is presented here in a jazzy piano version by Gladstone Anderson. The closing track on disc 1 is Derrick’s answer version to Lee Perry’s tune Sipreano.

Disc 2 is a motley collection of vocal tracks, a large part of which comes from Rudy Mills and Keith & Tex, artists with whom Derrick Harriot enjoyed great success. Rudy Mills’ career has been short-lived, with hits such as Long Story (not featured here), and Lemi Li, the stunning Heavy Load, his cover of the soul hit Tears On My Pillow and Wholesale Love. His rendition of The Rolling Stones’ hit Time Is On My Side isn’t his best effort, though.

Keith & Tex were extremely popular in the second half of the 1960s, with hits such as Tonight and Stop That Train. It’s a pleasure to hear their beautiful close harmony vocals on lesser known songs like Tighten Up Your Grid, Yah Yah Festival, and Down The Street. Two of the Ethiopians’ finest outings can also be found here, Baptism and Good Ambition. The Chosen Few’s lead vocalist Noel ‘Bunny’ Brown did a sweet reggae do-over of By The Time I Get To Phoenix, a hit for country music singer Glen Campbell in 1967. Sweet, obscure and ridiculous…check out Pat Satchmo’s A Handful Of Friends. Pat showcases his amazing talent as he sings double (Louis ‘Satchmo’ Amstrong as well as his usual voice) perfectly in this song.

Junior Murvin, the man with the unique multi-octave falsetto voice from Port Antonio, cut a few nice sides for Derrick as Junior Soul, here they have included The Hustler, an uptempo early reggae tune. Two singers who would later be successful as solo artists are presented as a duo in this compilation. Tinga Stewart and the recently deceased Ernest Wilson are responsible for two songs. She’s Gone is a decent tune, but Old Old Song is no less than a little gem. The Temptations song Message From A Black Man was one of the many ‘black awareness’ tunes from that period. Derrick Harriott covered the song with style, this set includes the riveting instrumental cut, which closes the album.