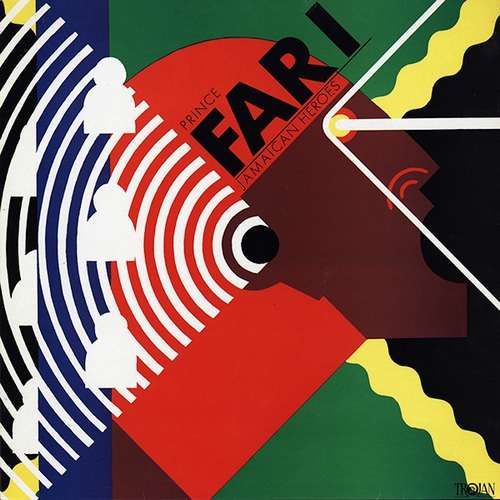 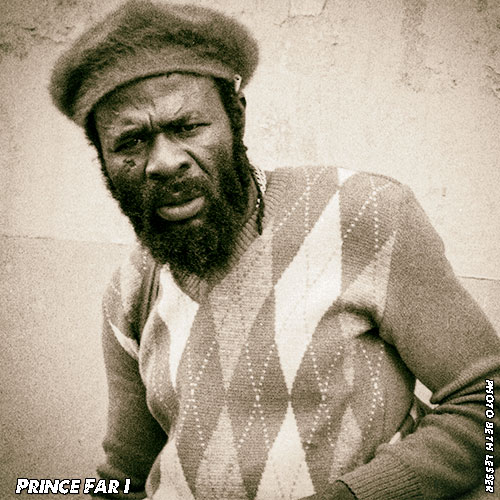 Born Michael James Williams in Spanish Town, Jamaica in 1945, Prince Far I grew up in the Waterhouse area of Kingston. In the early 1970s he was working under the stage name, King Cry Cry, with a few slices released by producer Coxsone Dodd. He then started using the name Prince Far I. With a unique, deep, husky voice voice and talking over style, he became a popular reggae artist, styling himself ‘The Voice of Thunder’.
He has recorded albums for several prominent producers. He also dedicated himself to producing his own work for his own label Cry Tuff. He recorded with Joe Gibbs the well known single Heavy Manners in response to the ongoing political troubles, using Naggo Morris’ hit Su Su Pan Rasta from 1975. An album with the same name followed soon. The albums Voice Of Thunder, Message From The King and Jamaican Heroes can be considered essential Prince Far I material. Unfortunately, this genius artist left us way too soon. He was murdered on September 15, 1983, in the middle of recording sessions for producer Roy Cousins.

The 1980 album sees him in a killer combination style with the ruling background band of that period, Roots Radics, lead by super bassie Flabba Holt, check his interview here. Drenched inna bubbling sound bath of echo, reverb, and delay, they underpin the chanter’s provoking conscious lyrics with powerful, sometimes mystical, and always intriguing backdrops. As we are used to, Prince Far I’s impressive voice guarantees half an hour of top-notch roots reggae.
The fact that he makes inventive use of proven riddims from the rich Jamaican music history is no problem at all. He uses the acclaimed Satta riddim for Deck Of Life, which by the way is a version of the song Deck Of Cards that he recorded for Joe Gibbs. Prince uses Winston Riley’s Stalag riddim for The Vision.

With Golden Throne he tries to convince ‘natty’ to leave Babylon and return to the roots, Africa, and live there in the spirit of Rastafari. The lyrics come out of the speakers in compelling staccato style and make this one of the highlights! Natty Champion is a metaphor for the fight between the evil (Babylon) and the good (Natty Dread) and is underpinned by Burning Spear’s ominous He Prayed riddim. On the album Heavy Manners this one was called Big Fight. Side 2 opens with the title track in which Prince Far I calls on the ‘real’ heroes of Jamaica in singjay style and at the same time honors them. In the song, the ‘discoverer’ of Jamaica, Columbus, gets a virtual punch in the nose! The song Musical History is filled with criticism of, especially, the lyrics of the then deejays, such as Yellowman and General Echo. Their lyrics were just ‘gimmicks’, in contrast to his lyrics that tackled sensitive themes on the social, political, and human spheres.