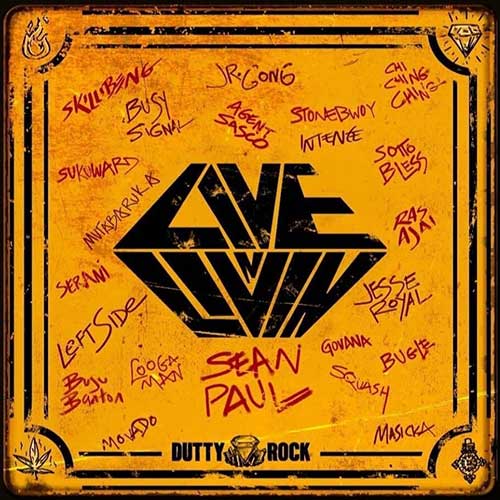 We still remember receiving a message from Jeremy Harding, in the second half of the ’90s Sean Paul’s manager, in which he asked if we could give one of the artist’s earliest singles (Black Bottle) repeated listenings because he was a huge talent with such a unique flow that he undoubtedly was going to become a big name in the music business. And indeed, after scoring hits such as Infiltrate, Check It Deeply, Mek It Go So Den, Strategy, Deport Them, Gimme The Light, Get Busy, and Hot Gyal Today alongside Mr. Vegas, Sean Paul’s popularity grew at a ridiculously fast rate and he became an international household name in music.

Early 2014, Sean Paul dropped his sixth studio album Full Frequency, his final album for US major record label Atlantic Records. And now, the multi-award-winning Jamaican dancehall star is back with a brand new album, which happens to be a strong collaborative project as all tracks but one feature a guest artist. It’s actually the first of two albums that were in the can for release in 2021 – Scorcher (Island Records) being the other one due for release in May.

On Live N Livin Sean Paul, in collaboration with no less than twenty-one guests (most of them belonging to the new generation of dancehall artists), offers the listener a variety of styles and genres with especially Afro-dancehall being the dominant factor throughout. Some of the tracks are brand new offerings, while others are remixed versions of songs or have been previously released. The singjay’s instantly recognizable vocal style and flow are present in all tracks. Furthermore, they show a level of skill in Sean Paul which he has rarely been given credit for. And then, of course, there are the guest appearances that mostly add even greater fun and appeal to the songs.

When it comes to the remaining twelve tracks, do check The Plug, produced by Chimney Records, with Chi Chi Ching boasting across an enthralling synth backdrop, which is fi sure a contender for our favorite track on the album. Since leaving prison at the end of 2018, Buju Banton has embarked on an impressive comeback. With his contribution to Crazy, a tune with a nod to the old skool dancehall style, it becomes clear once again that he is a rare talent. The superb funky groovin’ Schedule with vocal support from Chi Chi Ching and Damian ‘Jr Gong’ Marley, leaves a very good impression. Next drop four of the album’s highlights. First, there’s the stellar Money Bag, which is followed by the matching Protect Me. Although dancehall is not known for its use of conscious lyrics, Sean Paul’s only solo song Lion Heart – with an autobiographical touch – is a pleasant exception. Noticeable, but without question effective in relation to the lyrics, is the change of tempo in the song. Nice shot!

Guns Of Navarone (Remix) is in the same vein, involving the talents of dub poet Mutabaruka, the Ghanaian superstar Stonebwoy, and roots singer Jesse Royal. This combination delivers nothing less than a killer conscious piece! Jamaican Sotto Bless, an up-and-coming artist from Sean Paul’s Dutty Rock camp, and seasoned artist Bugle join Sean Paul on Danger Zone. The piercing and hypnotic beat of the hip-hop-esque tune is a pounding dancefloor filler. Except for the remix of I’m Sanctify from 2018, the last three tracks of the album don’t include much to rave about.

Conclusion This album will surely find its way to all Sean Paul fans and to those who are into the sound of modern dancehall.