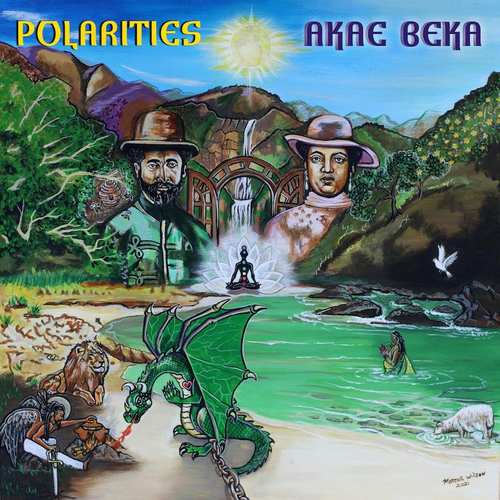 Vaughn Benjamin, who gained fame as the lead vocalist and songwriter of the Midnite and Akae Beka bands, passed away on November 4, 2019. He released a staggering amount of 72 albums in his lifetime and also posthumously albums were put out which included Defendjah (2020), The Spirit Of Standing Up (2020), La Corona Ship St Mary Tsion Power Of The Trinity (2020), Protocols (2020), and Righteous Synergy (2021). And now, hot on the heels of the Righteous Synergy album released by Fifth Son Records, there’s a brand new release from his vast archive of recorded materials, a 13-track album entitled Polarities.

Polarities, put out by I Grade Records, is the culmination of a 20-year working relationship that began with 2001’s Nemozian Rasta album, which was Midnite’s 4th album released at that time. It’s actually the 11th full-length album from Akae Beka (two words that come from the Book of Enoch, cited in chapter 68, verse 20-24) since the band was formed in February 2015. In fact, Polarities, jointly produced by the Zion I Kings production team, with Tippy I of I Grade Records at the production helm alongside Vaughn Benjamin himself, follows up 2016’s Portals which was also released by I Grade Records and produced by the Zion I Kings and Vaughn Benjamin. Zion I Kings is a family of producers and labels that include Jah D of Zion High Productions, Tippy of I Grade Records, and Moon of Lustre Kings Productions.

Laurent ‘Tippy I’ Alfred, a native of St. Croix, US Virgin Islands, who’s a musician, producer, audio engineer, and co-owner of I Grade Records, and Vaughn Benjamin have been producing songs together since 2001, and with this Polarities album they’ve returned to their roots of sharing album production. The sound reflects this collaboration as it weaves deep roots bass lines with intricate melodies and instrumentation. Players of instruments that created the sound include the above mentioned David ‘Jah D’ Goldfine, Laurent ‘Tippy I’ Alfred, and Andrew ‘Moon’ Bain plus the late keyboard and trombone maestro Andrew ‘Drew Keys’ Stoch, Andrew ‘Bassie’ Campbell, Lloyd ‘Junior’ Richards, Kirk Bennett, Steven Katz, and Aston Barrett Jr among others. The 13 tracks gathered on Polarities were mostly recorded between 2015 and 2018, many while on tour when Tippy was manager and FOH engineer for Akae Beka. Besides those recorded in Chile, France, and the US, the songs Everything Bless and Viral Trend were recorded at the renowned Tuff Gong Studio in Kingston, Jamaica.

Previous collaborations between Tippy I and Vaughn Benjamin have shown that they bring out the very best in each other and this collection of tunes is no exception. The brilliance of Vaughn Benjamin, the exceptional talent and skills of Tippy I, and the excellent musicianship of those involved unmistakably come to the fore on Polarities, which easily takes its place in the top 5 of albums that were released by Midnite and Akea Beka. Without a doubt, musically and lyrically this is King’s music at its very best. The great opener Don’t Feel No Way instantly sets the tone for Polarities. It’s a thoroughly appealing tune that is driven by ‘Bassie’ Campbell’s wicked bass line. Furthermore Balboa Becker and Garrett Kobsef – playing trombone and saxophone respectively – treat the listener to the distinctive horns sound that is typical for Zion I Kings projects. Definitely a good choice to put Don’t Feel No Way at the beginning of this album.

The next 12 tracks, including notable collaborations with Tiken Jah Fakoly of Ivory Coast on Everything Bless and Jamaica’s prominent reggae singer Chronixx on Black Carbon, are pure gold. It’s almost impossible to point out the most outstanding ones because each track stands out in its own way. So, let’s now mention the current favourites which include Charges, Black Carbon featuring Chronixx, Sow And The Reap, and the title track Polarities. The latter is one of the albums’ highlights. Lyrically it’s a song that, like almost every Akae Beka effort, demands repeated careful listening to really understand what it’s all about. The song deals with philosophical subjects and it’s worthwhile to explore its lyrical content. Besides that, the riddim with its kind of echoing sound is excellent and fires on all cylinders. The utterly beautiful Sow And The Reap, the last track recorded for this album before Vaughn Benjamin’s untimely death, is a great message tune that leaves a serious impression. The collaboration with Chronixx, Black Carbon, is a winner with the vocal styles of the two singers blending perfectly well together. In this powerful song both artists express that, no matter what race or color you are, we are all coming from the same source… black carbon. And last but not least there’s Charges, a track about the pros and contras of the capitalistic system that grows and grows and in the end becomes one of sheer beauty. Pretty sure, other favourites can be added after repeated listenings.

It’s said that this is the last posthumous album, but when it comes to the highly prolific Vaughn Benjamin you never know if that’s a real fact. Anyway, whether or not Polarities is his last album, all reggae fans should consider themselves lucky with the release of this landmark album.

Conclusion All tracks on this Akae Beka posthumous album are pure gold.