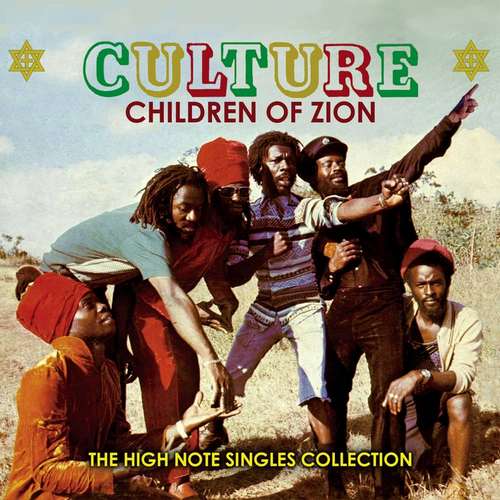 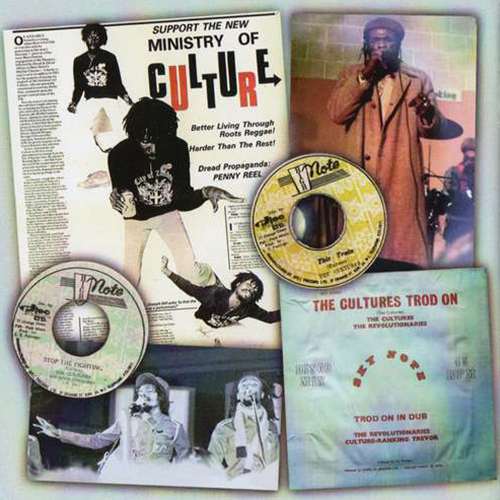 The initial vocal trio Culture -named The African Disciples- was formed by lead vocalist Joseph Hill and harmony singers Albert Walker and Kenneth Dayes. Joseph Hill had recorded the sublime Behold The Land for Coxsone Dodd in 1972, but Dodd didn’t release it until Culture became popular. As a member of Studio One’s house band The Soul Defenders, he provided backing vocals and played percussion. When the trio teamed up with Joe Gibbs, he changed their name into Culture and released a slew of fine singles. The single Two Sevens Clash, a stark foreboding prophecy of civilization in pure chaos, was one of the biggest roots reggae records of that year. Joseph Hill became the personification of roots reggae, with a voice like Burning Spear, Bob Marley-esque songwriting abilities, and heavily inspired by the black militancy ideas of Marcus Garvey. That same year Gibbs issued the majestic lp Two Sevens Clash which is still heralded as one of the greatest all time reggae releases, commanding your attention from the first note.

After a dispute over royalties, an all too common issue in the reggae business, Culture switched to Sonia Pottinger’s camp with its High Note and Sky Note labels. It was the trio’s musical headquarters from late 1977 until early 1980. During that prolific period, they recorded three vocal albums, a dub set, and nuff singles. In 1978 an (unofficial?) album called Africa Stand Alone was released on April Records, sharing some tracks of Harder Than The Rest but inna different mix. The original Culture line-up split up in 1982, and since Joseph Hill – as a solo performer or with additional backing vocalists, but always using the name Culture – has enjoyed considerable success with a string of quality roots albums. Joseph Hill died on a tour bus on 19 August 2006. His son Kenyatta subsequently took over his role in Culture.

Doctor Bird Records, a division of Cherry Red Records, specializes in vintage Jamaican sounds licensed from the legendary catalog of Trojan Records. The first two discs of this massive triple cd digipack (38 tracks!) collect the A and B sides of all the group’s Jamaican 7″ and 12″ High Note singles, with disc 3 comprising rare and previously unreleased 12″ mixes from Sonia Pottinger’s vaults. A booklet with enlightening liner notes by Tony Rounce and beautiful photos is a nice addition.

Prepare for a veritable deluge of roots reggae of the highest level. Needless to say, most of the songs are known and loved by any serious reggae fan. With their songs that denounced poverty, violence, discrimination, and injustice, they were highly admired worldwide. The group was also called ‘The Cultures’ more often at the time and that name was used on the first single Work On Natty. The compelling anti-violence song Stop The (Fussing And) Fighting is Hill’s comment on the attempted assassination of Bob Marley. This resulted in the group’s second hit single after Two Sevens Clash.

Production Something sees Hill in the role of deejay, toasting with powerful authority, adapting the alias of Grandpa Culture. The tune is also included on disc three in an extended 12″ mix. Iron Sharpening Iron (Trod On) was included on the lp Harder Than The Rest. This gem returns on this set in the 12″ version, followed by the deejay version –Rockers Dub with Ranking Trevor, and to our delight we find on disc three the version with Jah Thomas toasting across the riddim.

Their first 1978 releases were Dog A Go Nyam Dog and Down In Jamaica (Where Marcus Garvey Came From), two impressive rootical outings. One of our personal favorites is Pyarka, a tune they also cut for Joe Gibbs inna different arrangement. An 11 minutes long alternative mix is found on disc three. “Do you ever see a black rose, in a white garden”: The militant Black Rose was released in 1978 under the name of Oraiginal Culture, is a flawless piece of roots music.

On disc two the roots train keeps on rolling with the traditional sounding This Train and the gorgeous 12″ single Natty Never Get Weary, a song from the Cumbolo album. This song flows like an unstoppable river with streams of roots’n’culture. The above standard tracks The Shepherd and Too Long In Slavery were songs from their mediocre rated 1979 album International Herb. The irresistible repatriation song Forward To Africa was released in 1981 and was also a worthy conclusion to the collaboration between Culture and Sonia Pottinger. The closing song, the 12″ single Tell Me Where You Get It is pure ites and was also featured on the lp Harder Than The Rest.