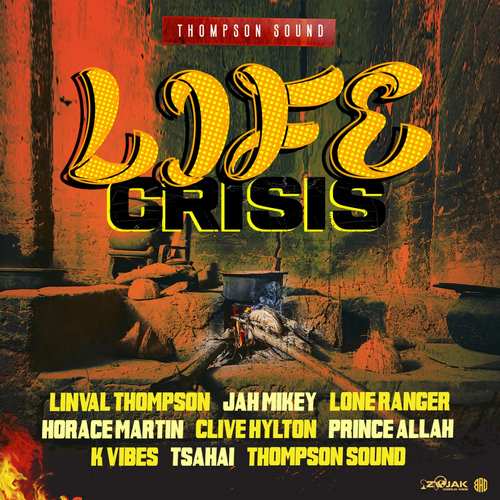 Linval Thompson, who was strongly influenced by artists such as Johnny Clarke, Horace Andy, and Dennis Brown, cut his first side in New York, but when he returned to Jamaica in 1974 he soon started recording for producer Bunny ‘Striker’ Lee, scoring immediately with Don’t Cut Off Your Dreadlocks. Linval Thompson soon added his name to the hitmakers of the Bunny Lee camp, Johnny Clarke and Cornell Campbell, with classic tunes like Jah Jah The Conqueror, Cool Down Your Temper, Ride On Dreadlocks, and A Big Big Girl.

When Bunny Lee had issued his album called Don’t Cut Off Your Dreadlocks in 1976, Linval Thompson took up producing himself. In 1977 he and the late Henry ‘Junjo’ Lawes produced the haunting Jah Jah Guiding Star. ‘Junjo’ Lawes became the major Jamaican producer of the early 1980s, but Linval Thompson wasn’t that far behind. In the early dancehall years, he produced excellent music with a host of artists including Freddie McGregor, Johnny Osbourne, Barry Brown, Rod Taylor, Barrington Levy, Eek A Mouse, The Meditations, and The Viceroys.

About 40 years after he became a well-respected and successful producer, Linval Thompson is still active in the production chair and as a singer. Through his record label Thompson Sound he has released a brand new 12-track compilation in Showcase style, the vocal cut followed by its dub version. Besides Linval Thompson himself, the tracklist features the names of legendary artists like Lone Ranger, Jah Mikey, Prince Alla, Clive Hylton, and Horace Martin. And furthermore included are the names of two female vocalists, New York-born K Vibes and Tsahai. Although no information is provided, it sounds like most riddims are laid by the Roots Radics band in the ’80s.

As already pointed out, Life Crisis is a Showcase album with six vocals accompanied by their dubs. The opener is the title track which is performed by three the hard way, the singer Linval Thompson alongside the deejays Jah Mikey and Lone Ranger. They expertly ride a wicked bass-driven rub-a-dub riddim, which can be fulljoyed to the max when listening to Life Crisis Dub. In the ’80s, Horace Martin recorded the song War across an incredible version of the Stalag riddim for producer Glen Brown. This collection also features a song titled War by Horace Martin, but, although he uses some of the lyrics from the ’80s piece, it’s not a do-over of that amazing and heartbreaking tune. Anyway, it’s a great tune worth hearing. Clive Hylton aka Colour Red, probably best known as the singer of the near-mythical 1978 Black Ark tune From Creation, is vocally still in good shape and leaves a serious impression with A Yah Me Deh. More classic roots music comes from Prince Alla whose Babylon A Fight comes on a riddim with a slower tempo. The efforts of K Vibes and Tsahai, whose Irie Natty is underpinned by a relick of the Vanity aka I’m Just A Guy riddim, are nice to hear with Black on Linval Thompson’s I Love Marijuana riddim being the most appealing one.

Conclusion An album that will appeal to fans of old-skool dancehall.