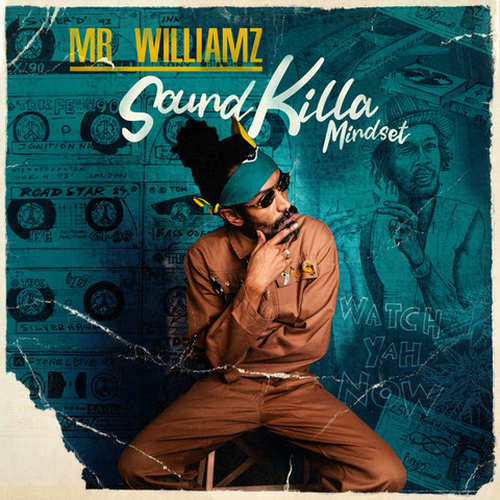 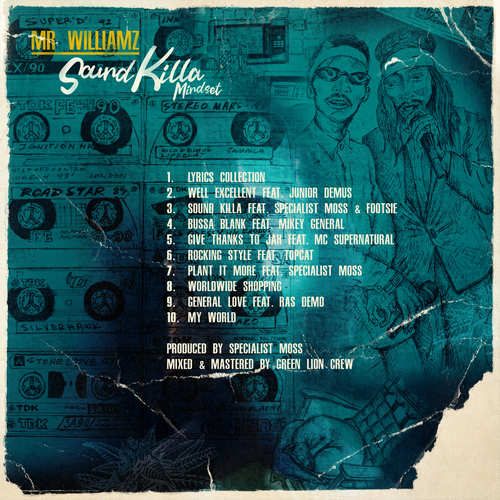 After his 2017 collaboration with US-based Green Lion Crew entitled The General Come To Town, Mr. Williamz is back with his third full-length album, the Specialist Moss produced Soundkilla Mindset. The new album also comes with a limited edition magazine that features drawings by Mr. Williamz himself, as well as lyrics and a wide selection of merchandise.

Born in London UK, Micah Williams aka Mr. Williamz was 6 years old when his father moved home to Jamaica bringing both him and his younger brother with him. By the age of 10, he was already a local favourite winning local clashes and competitions and at 15 he returned to London. Today the reggae & dancehall artist from West London is a respected statesman of the Portobello dancehall-soaked streets who is recognised for his authenticity. His 20-year career has seen notable collaborations with Major Lazer, Shy FX, Mungo’s Hi-fi, Green Lion Crew and Big Zeeks. He has recorded and performed with the likes of Chronixx, Damian ‘Jr Gong’ Marley, Gappy Ranks, Hollow Point, Jah Mason, Junior Demus, Mikey General, Pinchers, Spragga Benz, Stephen Marley, Topcat, and one of his idols, Supercat. in 2018, he made his acting debut in the feature length film Yardie, directed by Idris Elba.

By now, his many fans world wide fully know what to expect from Mr. Williamz – a highly energetic old-skool dancehall album from an indefatigable artist. And that’s exactly what Mr. Williamz’s brand new album is all about. Soundkilla Mindset takes the listener back to the roots of sound system and dancehall music. While listening to the various tracks gathered on this vinyl platter it is evident that the artist’s inspiration is drawn from dancehall icons such as the late Nicodemus and Supercat.

Soundkilla Mindset, which is packed with deadly goods, sees the incredible Mr. Williamz taking no prisoners. Of course, Mr. Williamz has an approach that is well known to and cherished by many avid early dancehall fans, but there’s nothing wrong with that. As we have learned from previous releases, regardless of whom he’s working with, he brings forth this very fresh presentation from three decades ago or so. This collection of tunes fully showcases his melodious sound and blistering lyrical abilities to ride any riddim in perfect timing. The inclusion of appealing updated versions of instantly recognizable classic dancehall riddims and several guest appearances adds a nice dimension to the album.

The first track of Soundkilla Mindset is the already familiar 2020 single Lyrics Collection which comes across an awesome relick of the Mad Mad aka Diseases riddim. A great opener and one that goes on repeat! ‘When it’s nice we play it twice (or three, four, five times)’ also applies to the boom tune Sound Killa over the Stalag riddim, the wicked collaboration with Top Cat entitled Rocking Style, and the smashing General Love featuring Ras Demo on the General riddim. And then, there’s the deejay/singer combination tune Bussa Blank done with Mikey General which picks up steam as it progresses. Of particular interest are the more reggaefied ganja piece Plant It More and My World. The former is underpinned by an exceptional interpretation of Sly & Robbie’s Baltimore riddim, while the solo piece My World sees Mr. Williamz versioning Dennis Brown’s If This World Were Mine in a great way.

Conclusion This real authentic dancehall album with a modern twist is pure dynamite!