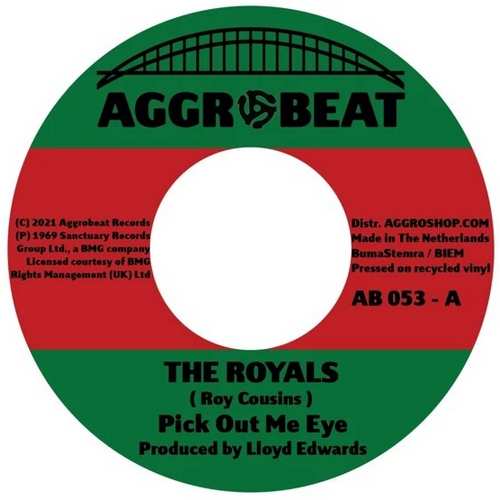 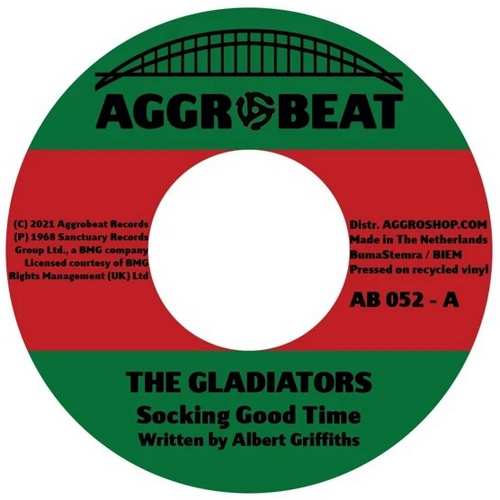 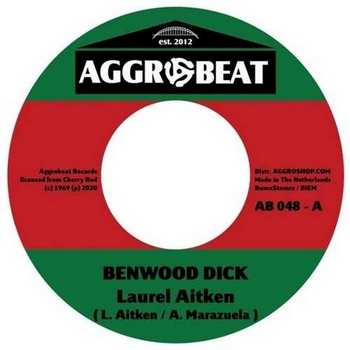 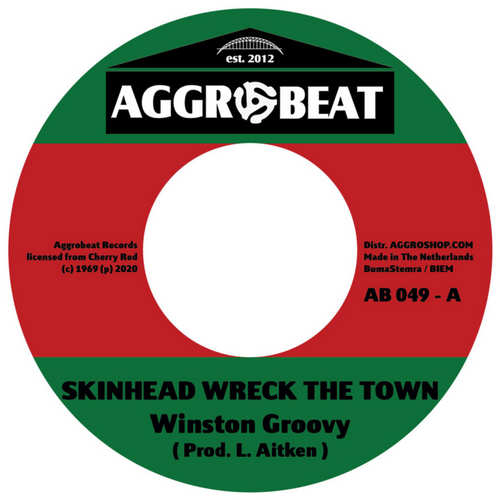 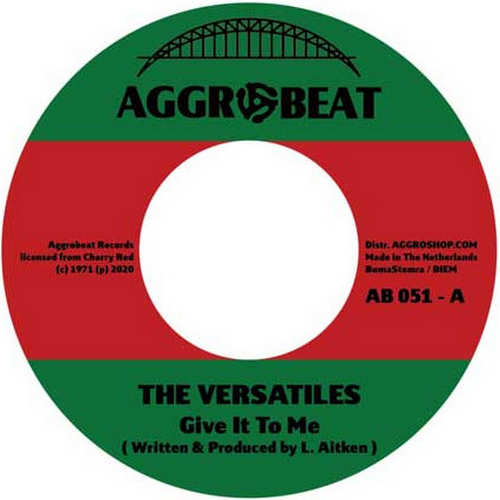 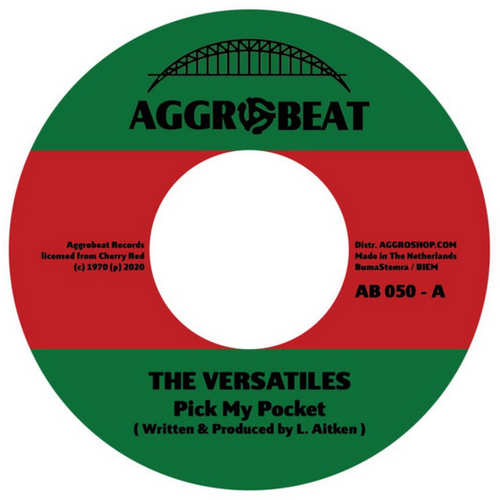 AB050:
The Versatiles – Pick My Pocket
The Freedom Singers – Freedom

Aggrobeat Records is a record label located in the border area of The Netherlands and Germany and operates from both countries. The label started as a pure Oi! & punk label and although punk is still part of the label, they shifted their focus to early reggae, roots reggae, and soul music. Next to a record label Aggrobeat also runs a mailorder service carrying hundreds of reggae vinyl through their webshop. All (remastered) vinyl singles from Aggrobeat Records are pressed in the Netherlands on high-quality recycled vinyl in a pressingplant with machines powered by green energy, green gas, and solar energy, while the inlays with extensive liner notes by Paul Benschop are printed on 300 grams recycled paper. The sleeves are printed on FSC certified paper with the hypesticker on the sleeve using recycled paper and vegan glue. So far, Aggrobeat Records has released six double-A sided 7″ singles plus one 12″ vinyl platter with classic tunes from artists such as Laurel Aitken, The Versatiles, The Freedom Singers, The Gladiators, The Royals, and Junior Byles. So, let’s take a closer look at these releases.

In 2020, Aggrobeat Records released its first 7″ vinyl reggae single with two ‘boss reggae’ or ‘skinhead’ reggae tunes. This early, energetic form of reggae can be split into two camps: Jamaican-recorded and homegrown. On the latter front, the leader was Cuban-born Laurel Aitken, resident in the UK from 1960 after a brief period as a pioneer of Jamaican R&B. This 7″ single features two self-produced stompers by Laurel Aitken, Benwood Dick and Apolo 12, both issued under license of Cherry Records Ltd, London. The original single hit the streets of the UK in 1969 when New Beat Records, a subsidiary of Pama Records, released it on a blank label. However, it never made it to a formal pressing as sadly the final release was cancelled and replaced with the Mr. Popcorn single in early 1970. This is the first time since its release over fifty years ago that this very rare single is being reissued in its original 7″ format. Benwood Dick on the A-side deals with the topic of a big shaped man. Most likely the sexual content of the lyrics of this tune was the reason why the final release got cancelled. The B-side features Apolo 12 aka Skinhead Invasion, a boss reggae tune carried by a heavy bassline which makes it suitable for some good moonstomp dancing. Apolo 12 gained a cult status among followers of the skinhead subculture.

The label’s second release is another reissue of a highly collectable 45 produced by Laurel Aitken, this time for Junior Lincoln’s Ackee Records. Originally a 1969 pre-release only on a blank label with the Skinhead Wreck The Town miscredited to Laurel Aitken or sometimes Mystery Man. Although the song was written and produced by Laurel Aitken, it was Winston Groovy who voiced this tune – confirmed by Winston himself when contacted early 2020. While listening to this song it’s obvious that it is based on Desmond Dekker’s Licking Stick. Moon Rock is a typical Laurel Aitken song, one of a number of hugely popular tunes he wrote and recorded when early reggae became the favoured music of the UK’s growing skinhead population. Apart from the B-side on Ackee Records, Moon Rock also appeared on the A-side of another single featuring Laurel Aitken and Winston Groovy: the 1969 Bamboo Records single Moon Rock/Cut Up Munoo.

The Versatiles – Pick My Pocket / The Freedom Singers – Freedom

Another single in which Laurel Aitken is involved. Here he’s the writer and producer of the songs. Seeing these songs done by The Versatiles and Freedom Singers respectively is quite interesting. The Versatiles were a Jamaican vocal group, formed in 1967 by Junior Byles, Louie Davis, and Dudley Earl, which Byles left in 1970 for a successful solo career. The Freedom Singers was another Jamaican vocal group formed in 1967 by producer Coxsone Dodd to record some covers and gospel songs. Members of the group included Al Campbell, Enid Campbell, Winston Jarrett, Noel ‘Scully’ Simms, and Larry Marshall. Laurel Aitken let other artists voice songs he wrote and for these projects he used a variety of names including those of the aforementioned Jamaican groups. Although it’s uncertain and not really clarified who was involved in the UK Versatiles, there’s more certainty about the UK Freedom Singers. Involved were Denzil Dennis and Milton ‘Prilly’ Hamilton, who is notable for his vocal contributions to Inner Circle and Third World and his work with Sly & Robbie for whom he recorded an album and several singles. This reissued single was put out by New Beat Records in August 1970. Of the two tracks, it’s The Versatiles’ Pick My Pocket that makes the best impression.

Here’s another 7″ single that features the UK Versatiles. Originally released in 1971 in the UK by New Beat Records, this platter features two nice slices of boss reggae. The A-side features the vocal version Give It To Me, while the flipside contains Tiger’s answer version called Hot. The single was released during the productional highlight of Aitken’s career. The artist Tiger, who actually was Laurel Aitken himself, put out eight different singles from 1970 to 1973. For songs under the alias Tiger, he more often chose for themes like black consciousness or society’s racism. However, lyrically Hot comes with a traditional Aitken theme.

This single originally appeared as a blank label release on the WIRL label (West Indies Records Limited) in Jamaica in 1968 and can be considered as one of the rarest singles by The Gladiators. Both songs on this vinyl platter were produced by Leebert Robinson, who was also responsible for producing other early Gladiators recordings as well as some of the earliest recordings by The Ethiopians, including their legendary single Train To Skaville. Socking Good Time and I’ll Take You To The Movies were both written and composed by Gladiators founder Albert Griffiths. These two songs were subject of a long debate. Initially often credited to The Sealmates or The Sealmakers, it wasn’t until the late ’90s that Albert Griffiths officially registered his name as the composer of both songs. After working with Leebert Robinson, The Gladiators did a few recordings for Duke Reid’s Treasure Isle label before they started quite a long stint with producer Coxsone Dodd for whom the recorded their first big hit Hello Carol.

The Royals – Pick Out Me Eye / Think You Too Bad

Aggrobeat Records’ most recent reissue is a highly sought-after single originally released by Trojan Records in 1969. Apart from an extended reissue of the Pick Up The Piece LP in 1983, this Lloyd Edwards produced single was the only other Trojan release of music by The Royals. Not really surprising given the fact that The Royals’ main force, constant member, and producer Roy Cousins is very reluctant in licensing his music. At the time both songs were also released in Jamaica on two different 7″ singles with a blank label. Both Pick Out Me Eye aka Them Dig Out Me Eye and Think You Too Bad are good examples of the shift from rocksteady to early reggae as they are underpinned by a riddim that is noticeable faster than the slower-paced rocksteady riddims. Maximum respect for this (reissue) record label with an eco policy that is not just an image. For the people behind label it feels like a logical consequence of the reggae lyrics and respecting the world we live in.

Conclusion Nice collection of reissued 7inches for those who don't want to pay high prices for the originals.