Black Roots – Nothing In The Larder 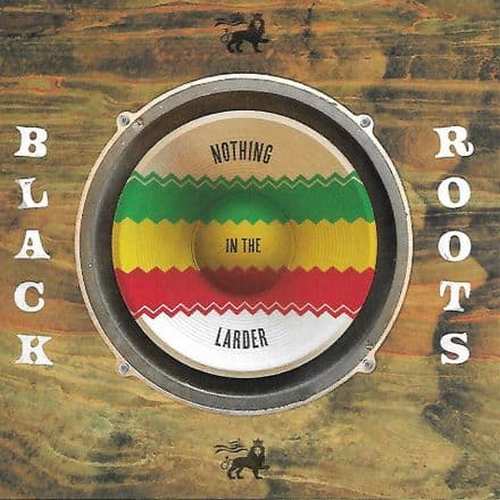 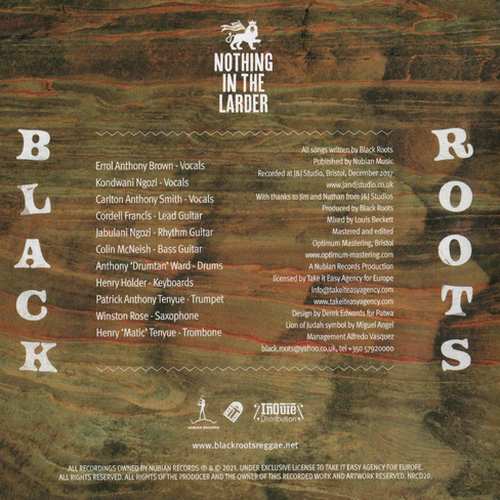 Black Roots – Nothing In The Larder

UK-based legendary roots reggae band Black Roots started their legacy in St.Pauls, Bristol, in 1979, when social economic crisis and racism were ravaging the country under the Thatcher government. Comprised of Errol Brown and the late Delroy Ogilvie on vocals, Kondwani Ngozi on vocals and percussion, Jabulani Ngozi on riddim guitar, Cordell Francis on lead guitar, Trevor Seivwright on drums, the late Derrick King on bass, and Carlton Roots on vocals and keyboards; these talents went deeply into a musical spiritual and social search through reggae music and toured the country incessantly and made waves. By 1983, they released their self-titled first abum which drew critical acclaim. Besides this debut set, we have to recall albums like All Day All Night (1986) which was their first of many collaborations with Neil Fraser aka Mad Professor, Live Power (1989), In A Different Style (1988), and Natural Reaction (1990). After the release of the latter, the band relatively disbanded. In 2010, six members of the original lineup reunited for a live set in Bristol which was followed by a brand new studio album entitled On The Ground (2014).

More than 40 years after Black Roots emerged on the reggae scene, the legendary band has unleashed its latest album called Nothing In The Larder. Recorded at J&J Studios in Bristol, this self-produced original set of tunes shows that they haven’t lost sight of the essential: the message in their music. And their message is strong, coherent and relevant in today’s world of pandemic inequality, racism and discrimination. Musically they’ve brought in some of the best UK musicians with decades of experience including an excellent horn section consisting of Winston ‘Sax’ Rose (saxophone), Patrick Anthony Tenyue aka Aba Ariginal (trumpet), and Henry ‘Matic’ Tenyue (trombone). And also involved is an awesome riddim section consisting of bassist Colin McNeish and the legendary drummer Anthony ‘Drumtan’ Ward, who has worked in the studio with Mad Professor and other UK-based producers, and for a very long time has been the go to drummer for UK visiting Jamaican artists such as Dennis Brown, Gregory Isaacs, John Holt, Johnny Clarke, Horace Andy, and the Mighty Diamonds. In fact, all the musicians who play on this Nothing In The Larder album are the same as those who played on the previous albums Ghetto Feel and Son Of Man.

The opening duo of track sets the stage finely for what develops into an exquisitely album behind it. In the first tune, the truly gorgeous ganja anthem Enlightenment, the listener is called to see beyond reality and to rise spiritually. “Free up the weed and let it inspire the youth of today, crack is not what you feed the youth’s consciousness.” The message expressed in this song is carried by beautiful layers of brass. In all, Enlightenment is one of the album’s highlights. Next comes the matching title track Nothing In The Larder, which advocates the message that even in the depths of despair there is always hope for a better world to come, if not for us then for the next generation. It’s a timely reminder that we must continue to promote equality, justice and enlightenment. Actually, the cry for equality and justice runs through this album and also comes to the fore in the third track, the moving Me Cry. It’s followed by the great sounding Fe See, an impressive tune that musically and lyrically fires on all cylinders, and the throughout solid Foot In which is really hard to get out of the mind. The beauty and power that comes to expression on the album’s first five tracks is also present on the next six tracks with in particular More Water Than Flour, Hidden Pain and White Mall being the ones that stuck on you from the very first spin.

While listening to this album, it’s really nice to experience that the distinctive lead vocals and harmonies in various songs bring to mind vocal groups like the Mighty Diamonds and The Meditations.

Conclusion The legendary UK outfit Black Roots has a formula that consistently works.