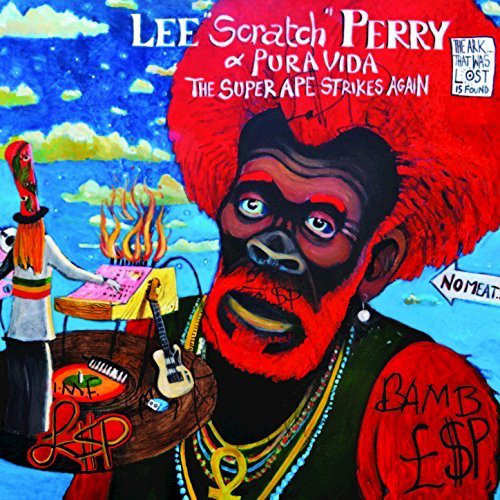 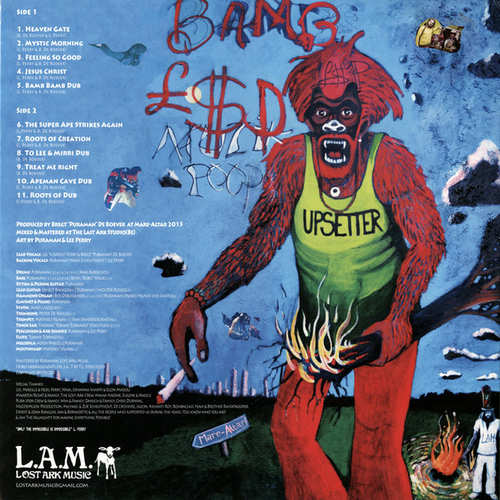 In his singer’s role, Lee ‘Scratch’ Perry made erratic records with a variety of collaborators, one of them being Belgium-based band Pura Vida. Here we look back at the excellent 2015 album The Super Ape Strikes Again.

Over the last decade, Belgium’s Pura Vida have consistently put out albums that truly embrace Lee Perry’s Black Ark heyday of the 1970s in their own right and in collaboration with legends that recorded at the storied studio. Consider Step By Step with Congo Ashanti Roy, Hard Road with the same legend, and a full album with The Congos. Struggle In The City and Red Hot serve as Royal statements of the message they present in their own dynamic way. It’s only natural that Bregt ‘Puraman’ De Boever and crew would do a project with Mr. Perry at some point. That time is now. The Super Ape Strikes Again is the Divine collaboration and evokes historic value and is a display for absolute love of King’s Music…

Lost Ark Studio is the musical hub in Belgium where Puraman and his ultra-talented unit focus on vintage recording and mixing techniques that consistently take the listener back many decades; sounds that have caught the attention of the music world and of course Mr. Lee Perry. His vocals were recorded in Belgium and in Switzerland (his homestead for many years) with Pura Vida’s riddims manifesting in the hearth of Lost Ark; though it’s listed as Last Ark on this project. (Feeling So Good and Jesus Christ were the last recordings done in the Lost Ark studio. Because the studio moved to a new location the Lost Ark is no longer lost (Perry found it!) and is called THE LAST ARK Studio.) Puraman recorded, mixed, and produced these majestic tracks with the vision of a true veteran. He’s upfront on drums, bass, guitars, keyboard, and percussion with the assistance of his longstanding band. Drummie Xan Albrecht, bassie Bobo Perck, gitsy Wouter Rosseel, keyboardists Bos Debusscher and James Laschelles (guest on Heaven Gate (X tended)) and the horn section of Pieter De Naegel/Mathieu Vilain are truly gifted! Pura Vida has garnered nuff attention internationally; the contributions from Addis Pablo, legendary guitarist Ernest Ranglin O.D and ace saxman Tommy Tornado truly raise the bar. Pura Vida have played live with Lee Perry, Congo Ashanti Roy, Jah9, and many others; their live presence is top-ranking indeed.

This set starts with Heaven Gate (X tended). This is a mystical atmosphere that certainly echoes Heart Of The Congos sessions. Mr. Perry navigates the melodica laced riddim in good shape with elevated wisdom. Recall 2014’s Back On The Controls and the listener is assured that his ‘rambling’ has generally become coherent and keeps things tasty. Mystic Morning is classic with warming falsetto harmonies in Congos tradition with Addis Pablo’s melodica and Tommy Tornado’s tenor sax elevating this into symphonic territory. Mr. Perry rides it in good clarity and turns it into a track of great proportion. Feeling So Good is a joyous affair indeed. Ernest Ranglin’s guitar work is amazing with great organ work from Bos. Lee’s vocals are a bit muddled, but the musicianship is so strong here that it works. Great arrangements and mix from Puraman. Jesus Christ is fulljoyment. Solid drum/harmonica from Puraman with Congoesque harmonies from Puraman and Nina Schelfthout. Some meaningful lyrics from Mr. Perry that are carried by the flowing riddim. Bamb Bamb Dub is the accompanying Dub to Jesus Christ and hits the mark. Sounds like early Black Ark work with Puraman fully in control at the mixing board. Instant rewind here! The title track is resonating; on the verge of anthemwise. Lee displays some flow here, but it’s the textured riddim and mix that is the Fyah here.

Roots Of Creation is a winner of all levels! Lee is in great shape here with powerful delivery and lyrical content. Memories of his 1976 classic Dreadlocks In Moonlight on this one. Tommy Tornado’s jazzy sax work is key and the Zion high harmonies are timeless. Boom! To Lee & Mirri Dub is a killer dub ode to Mr. Perry and his stunning empress Mireille Perry. This is a mind-bending excursion that accentuates the riddim guitar chops, hi hat, and great harmonica. All seamed together with Puraman’s limitless abilities. Blazing to the mountain top!! Puraman is a great vocalist and he is so powerful on Treat Me Right. A soulful affair that shows the influence Ashanti Roy has had on this messenger. Earthy baritone with power and conviction; riding a potent riddim with dynamite. The album closes with Apeman Cave Dub (title track) and Roots Of Dub (Roots Of Creation). Both are excellent treatments and raise the question, “was this recorded in 1976?”. Masterclass way to close out this fine album.

The Super Ape Strikes Again shows the respect the younger Roots artists have for those who helped pave the way. Pura Vida treats each project with absolute manners and respect. Lee ‘Scratch’ Perry was allowed to roam freely; he wouldn’t have any other way. Puraman and crew sincerely capture the vibrations that echoed from Black Ark many decades ago. Something this Roots unit is very good at. They are able to inject a great level of originality and substance to ensure no ‘carbon copy’. A great time is ensured with this album. Highest recommendation. GO DEH!!

Conclusion This album captures the vibrations that echoed from Black Ark many decades ago.