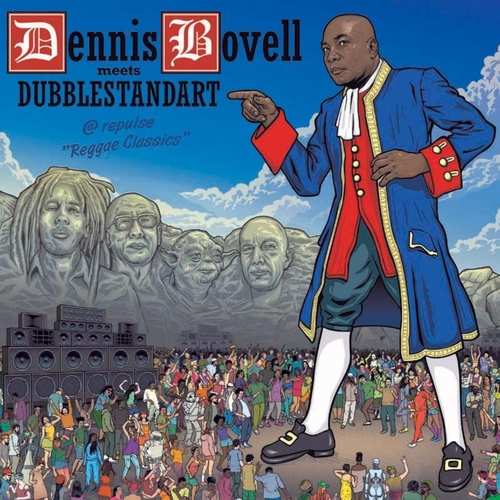 In 2019, Vienna’s Dubblestandart released a selection of interpretations and dub versions of classic roots reggae tunes that have been pivotal for the inspiration of Dubblestandart’s bandleader Paul Zasky. The album, titled Dubblestandart & Firehouse Crew Present Reggae Classics, was released by the dub reggae label Echo Beach out of Hamburg, Germany. And now this album has been given a new interpretation due to label headman Nicolai Beverungen inviting Dennis Bovell to ‘repulse’ it at the GoEAST Studio of Dubblestandart’s Robbie Ost. Using selected vintage outboard analogue equipment, Dennis Bovell re-voiced the songs, added a couple of guitar lines and in, co-operation with Robbie Ost, also re-dubbed the album – mixing on a legendary E – 6000 solid state mixing board taken over from Tears For Fears studio in London.

Barbados-born and London-based reggae guitarist, bass player, and record producer Dennis Bovell formed Matumbi in the mid-1970s and was a key figure in the early days of the lovers rock genre. He’s also known for attempting to fuse disco rhythms with reggae, most notably with the hit song Silly Games by Janet Kay. He has produced albums by a wide variety of artists including I-Roy, The Thompson Twins, Sharon Shannon, Alpha Blondy, Bananarama, The Pop Group, Fela Kuti, The Slits, and Madness. He has collaborated with renowned poet Linton Kwesi Johnson for much of his working life. In recent years his works regained interest, also due to the recent re-release of the 1980s movie Babylon for which he produced the soundtrack and his participation in Steve Mc Queens drama series Small Axe about the real-life experiences of London’s West Indian community, set between 1969-82.

Actually, Repulse Reggae Classics is a showcase album as the six vocal tracks are directly followed by their respective dub versions. Back in the days, this album format was particularly useful when Jamaican producers were short of material by the artist in question. Although the songs on this album were written in the 1970s and 1980s, they’ve never lost their meaning. And thus, they still perfectly criticise and analyse the “pulse” of current political leaders and societies who have controversial views. This is instantly clear when listening to the album opener I Am No Robot, a great rendition of Twinkle Brothers’ powerful 12″ single from 1981 which then appeared on their 1984 LP Age Of Reggae in a different mix. And, obviously, also the matching Babylon The Bandit, originally Steel Pulse’s title track from their 1986 released Grammy Award-winning LP, deals with a topic that is still relevant in current times. The next vocal track is a solid reworking of Burning Spear’s little-known Fly Me To The Moon, a nice lovers piece from his 1988 LP Mistress. Joe Gibbs produced Culture’s 1977 single Jah Jah See Dem A Come across a ‘rockers’ style relick of Sound Dimension’s Heavy Rock riddim. And although Culture’s original piece is the ultimate version, Dennis Bovell does the classic roots tune more than justice. Then Dennis Bovell goes into trusted territory with his new interpretation of Hypocrite, a track from Matumbi’s 1978 debut LP Seven Seals about the wrongs of the Babylon system and those who maintain it. Last but not least, there’s the well-done rendition of Malcolm X. Written by Winston McAnuff, it was Earl Sixteen’s 1976 cut that was put out on a 7″ single by Joe Gibbs before he made Dennis Brown re-record the tune in 1978. Dennis Bovell is also an acclaimed dubmaster, and thus it’s obvious that the six dubbed out versions are a more than welcome addition to the vocal tracks. Each and every dub included here is candy for the ears.

In all, Repulse Reggae Classics is an album with all the ingredients you would expect from Dennis Bovell.

Conclusion An album with all the ingredients you would expect from Dennis Bovell.