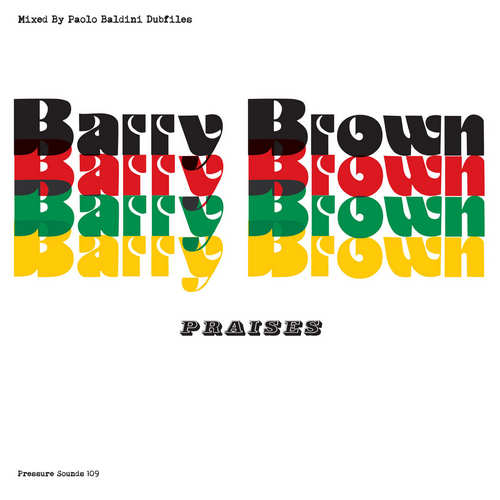 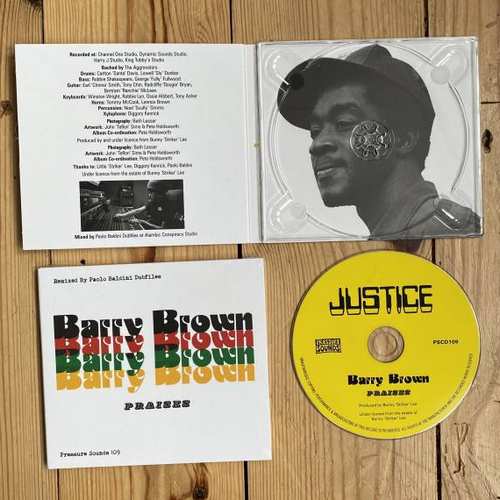 Barry Brown’s Praises is the latest album release coming from UK-based Pressure Sounds, one of the most enduring reggae reissue labels. Compared with the label’s more than a hundred previous album releases this one is somewhat different as this set contains remixes of roots songs by Barry Brown for producer Bunny ‘Striker’ Lee as well as tracks from The Aggrovators done by Paolo Baldini Dubfiles. Paolo Baldini also worked under the name Alambic Conspiracy and became a top class dub extraordinary performer, bass player, mixologist, and producer, and is known from collaborations with Mellow Mood, Hempress Sativa, Dub Fx, and others.

Barry Brown had originally started out as a DJ called Jah Smile, but he had also been part of a short-lived group with Rod Taylor and Johnny Lee who recorded under the name The Aliens. Brown then went solo and although his first single for Bunny Lee, Girl You’re Always On My Mind, had little impact, his militant roots-style vocals soon found popularity and earned him international acclaim. His giant breakthrough came with his first hit single, 1979’s Step It Up Youthman, which led to an album of the same name. One of the most successful artists of the early dancehall era, he – apart from Bunny Lee – worked with some of Jamaica’s top producers of the time, including Linval Thompson, Winston ‘Niney The Observer’ Holness, Prince Jammy, and Tony Robinson, as well as releasing self-produced material. For Channel One he recorded the album Far East in 1981. After releasing eleven albums between 1979 and 1984, Brown’s releases became more sporadic and by the late ’80s his popularity had started to fall, although his work continued to feature prominently on sound systems such as those of Jah Shaka. At the time of his death in 2004, he had pretty much fallen on hard times.

The Aggrovators were one of the main session bands of producer Bunny Lee. The line-up varied, with Bunny using the name for whichever set of musicians he was using at any time. The band’s name derived from the record shop that he had run in the late 1960s, Agro Sounds. Alumni of the band included many musicians who later went on to make names for themselves in reggae music. Legends such as Jackie Mittoo, Sly & Robbie, Tommy McCook, and Aston Barrett were all involved with the band at one point or another. Other regular members included Carlton ‘Santa’ Davis, Earl ‘Chinna’ Smith, George ‘Fully’ Fullwood, Ansel Collins, Bernard ‘Touter’ Harvey, Tony Chin, Bobby Ellis, and Vin Gordon. The band recorded Bunny Lee’s most popular output from the 1970s, with the instrumental B-sides of Lee’s single releases on the Jackpot and Justice labels generally credited to The Aggrovators and mixed by King Tubby.

All tracks included on Praises were mixed by Paolo Baldini Dubfiles during the 2020 lockdown at his Alambic studio in Italy, but the original production was, of course, done in Jamaica by Bunny Lee. The originals were mixed at King Tubby’s studio by the dubmaster himself, Pat Kelly (Step It Up Youthman, Natty Rootsman, Give Thanks And Praise), and Prince Jammy (Fittest Of The Fittest aka No Wicked Shall Enter The Gates Of Zion). If there were any doubts at all about this remix project, they were gone after having listened to the opener of the Praises album, the extended version of Step It Up Youthman. Paolo Baldini Dubfiles has done a truly great job as his approach shows he’s been doing the remixes in a respectful and faithful manner by keeping as much of the original recordings intact. From beginning to end the listener is treated to heavy, mind-blowing roots tracks that make your walls shake when you play them really loud. Have listened to several of Paolo Baldini Dubfiles’ projects before and they all sounded good to the ears, but can rightfully state that he truly outmatches himself with this one. The album features a guest appearance of Diggory Kenrick, a musician and filmmaker probably best known for his series of flute instrumentals, ever since The Lion Flute became a sound system favourite. Here he plays the xylophone on Creative Vibes, a version of the great From Creation riddim. In all, this album is a great tribute to the somewhat underrated Barry Brown, hit producer Bunny ‘Striker’ Lee, and King Tubby’s studio.