Keith Hudson – Flesh Of My Skin, Blood Of My Blood 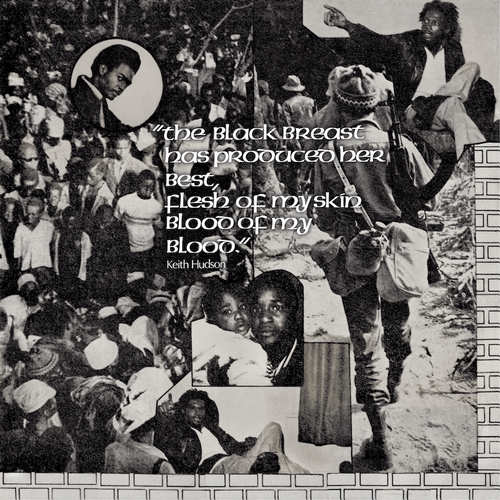 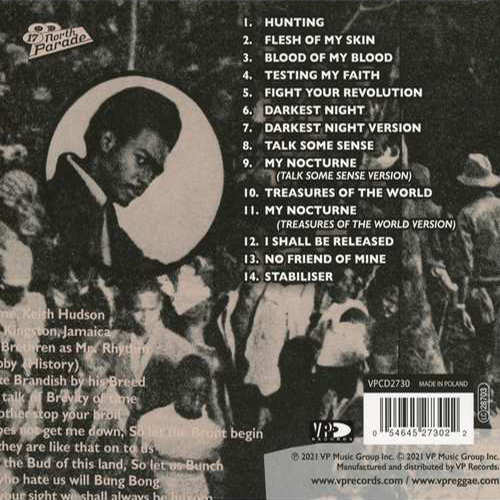 Keith Hudson – Flesh Of My Skin, Blood Of My Blood

1. Hunting
2. Flesh Of My Flesh
3. Blood Of My Blood
4. Testing My Faith
5. Fight Your Revolution
6. Darkest Night
7. Darkest Night Version
8. Talk Some Sense
9. My Nocturne (Talk Some Sense Version)
10. Treasures Of The World
11. My Nocturne (Treasures Of The World Version)
12. I Shall Be Released
13. No Friend Of Mine
14. Stabiliser
15. Hunting Version

VP Records’ subsidiary label 17 North Parade has reissued reggae singer and producer Keith Hudson’s obscure and edgy masterpiece, Flesh Of My Skin, Blood Of My Blood on vinyl and CD, and for the first time, on digital streaming platforms.

The Black Morphologist Of Reggae

One of the most innovative singers and producers to emerge from the reggae scene, Keith Hudson was born in Kingston, Jamaica on March 18, 1946. Keith produced his first hit with Ken Boothe called Old Fashioned Way in 1969. Despite no formal training in music, Keith showed a real knack for creating riddims, and was soon producing hits for U Roy, John Holt, and many others. In 1974, he created his first masterpiece, the progressive Flesh Of My Skin. This was followed in 1975 by Torch Of Freedom and Pick A Dub, one of the greatest dub albums. Too Expensive followed in 1976, a brilliant but misunderstood mood mix of reggae and disco. Stung by the criticism of Too Expensive, 1978’s epic Rasta Communication showed Keith fully embracing Rasta culture, both in music and message. He followed this album with The Black Morphologist Of Reggae in 1979 and Playing It Cool in 1980, co-produced by Bronx legend “Bullwackie”, and then Steaming Jungle in 1982. In 1984, Keith recorded with the Barrett Brothers at Tuff Gong Studios in Jamaica, an album called Rebel Rasta, which was what Keith was at heart, both a rebel and a Rasta. Returning to New York, Keith fell gravely ill and died of cancer on November 14th, 1984. VP Records posthumously released his final album as Tuff Gong Encounter in 2015. Of his work, Keith said: “My music is inspired by my sense of black dignity and a desire for freedom of speech, freedom of movement, and freedom of spirit.” ~ keithhudsonmusic.com

This 1974 set, with The Black Breast Has Produced Her Best, Flesh Of My Skin, Blood Of My Blood being its full title, was the first real solo flowering of Hudson as ‘The Dark Prince of Reggae’, with its overriding sombre and brooding atmosphere, but also righteous and proud, and one of the ‘holy grails’ for reggae-collectors. It’s in a way very laid back, as if the musicians were just having a jam session, anchored here by Santa Davis and George Fullwood from the Soul Syndicate – alongside musicians like Augustus Pablo on harmonica, Count Ossie & The Mystic Revelation and Leroy Sibbles – kicking off with the instrumental Nyahbinghi Hunting, followed by the song closest resembling ‘standard reggae’ Flesh Of My Skin and its version Blood Of My Blood both featuring the beautiful backing vocals of Candi McKenzie and the latter featuring John Kpiaye’s (later of Dennis Bovell’s Dub Band fame) jazzy guitar. Testing My Faith clearly shows the loose vocal delivery by Keith Hudson of poignant lyrics asking why can’t I be just like any other man, taken even one step further on Fight Your Revolution with its interspersed maybe tomorrow over a heavy bass driven riddim. Darkest Night has exactly the sound you would expect from a ‘Dark Prince Of Reggae’ with Keith Hudson lowered a bit over a haunting riddim.

The slow jam Talk Some Sense has again that beautiful contradiction between the sweet female backing vocals and Keith’s this is our occasion sounding as if it has already slipped away and is followed by the somewhat cheesy synthesized riddim of Treasures Of The World with the most upful vocal delivery Keith Hudson is capable of. My Nocturne is a wicked piece of beautiful bass driven instrumental reggae, followed by Keith Hudson’s take on Bob Dylan’s (and before in 1969 for Studio One and later in 1977 for Lee Perry by the Heptones recorded) I Shall Be Released. The lament No Friend Of Mine is a heartfelt accusation that is the last vocal track on the album, that closes with the organ workout Stabiliser. Like one of its successors, Playing It Cool, this is a wicked aural trip of about 38 minutes into the tormented and dazed mood of Keith Hudson’s genius.

This superb remaster of the original Mamba pressing of Flesh Of My Skin, Blood Of My Blood features the original mix and comes with the addition of the 7″ single only Darkest Night Version and the Syd Bucknor created dub from 1988 My Nocturne (Talk Some Sense Version) omitted from the 1988 and 2004 remix versions that appeared on Brent Clarke’s Tottenham based Atra imprint and German label Basic Replay respectively. Furthermore, it includes the previously unreleased Hunting Version, plus extensive liner notes written by Keith Hudson’s official biographer Vincent C. Ellis (keithhudsonmusic.com).

Conclusion A wicked aural trip into the tormented and dazed mood of Keith Hudson's genius.