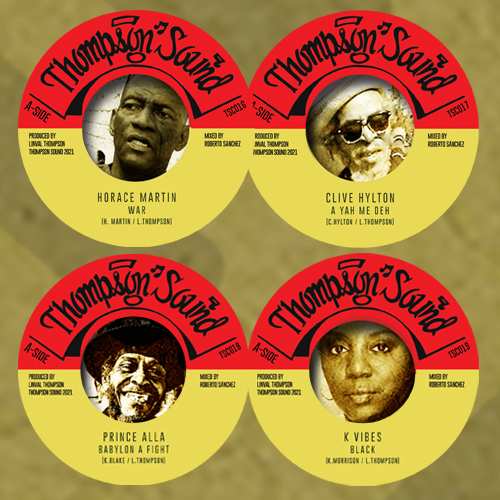 Underrated singer Horace Martin released a large number of recordings but received only little recognition. He began his recording career in 1979 and since then he has worked with top producers and labels, like with Lee Perry as Lawyer with his tune Unity, his first cut of Awake Jah Jah Children. Also with Robert Palmer’s Negus Roots, releasing Zuggy Zuggy and Sweet Something, while with the fiercely unconstrained Big Ben label he released Africa Is Calling, We Are All One, Beautiful Dream, and Jah Jah Children. For his song War, Horace Martin rides Johnny Osbourne’s classic Back Off riddim.

Born in 1956, Clive Hylton, also known as Colour Red, moved to Kingston with his family when he was 10 years old. He embarked on his recording career in sessions with Lee Perry at the legendary Black Ark studio, and his debut was released as a dubplate special for Lloydie Coxsone’s UK-based Coxsone International Sound System. The dance hall favourite, From Creation, was inaccurately credited to Junior Byles although by the ’90s Colour Red was acknowledged as the vocalist of the tune. In 1976, the song was remixed in dub with an infectious female chorus. The remix was included on Super Ape as the aptly titled Underground. Here, Clive Hylton covers the true Barrington Levy 1979 classic A Yah Me Deh over the same riddim, which also was the riddim that underpinned Freddie McKay’s Guide Us Jah Jah.

Born Keith Blake in Denham Town, Kingston, Prince Alla began his recording career with producer Joe Gibbs as part of the vocal group the Leaders during 1967/1968. Gibbs licensed three releases from the group through B&C Music in the UK before the Leaders disbanded. In 1969, Prince Alla became strongly involved in the Rastafarian movement and re-emerged in the mid’70s as a solo artist through Bertram Brown’s Freedom Sounds with a series of records – including Sun Is Shining, Mama Don’t Fight, and Stone – that have proved landmarks in the history of roots music. For the mighty Babylon A Fght Prince Alla joined forces with producer Linval Thompson.

Karen Morrison aka K Vibes is a gifted song stylist and writer with a firm grasp on her Jamaican culture that reflects strongly in her distinctive soulful singing style. Raised in New York City in a large Jamaican family, she held a passion for reggae music at an early age. She began singing with a local sound system in the neighborhood where she grew up under the name K Vibes. Artists like Screechy Dan and Knight Rider encouraged her to move to the next level of professionalism as a vocalist. In 1992 she made her very first recording at Sir Tommy’s Recording & Dub Studio. Since then she has worked with several top producers including Coxsone Dodd of Studio One. K Vibes rides the riddim of Linval Thompson’s classic song Marijuana and delivers the stunning song called Black.