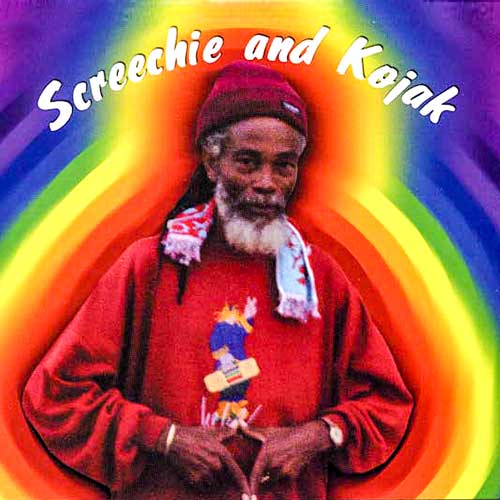 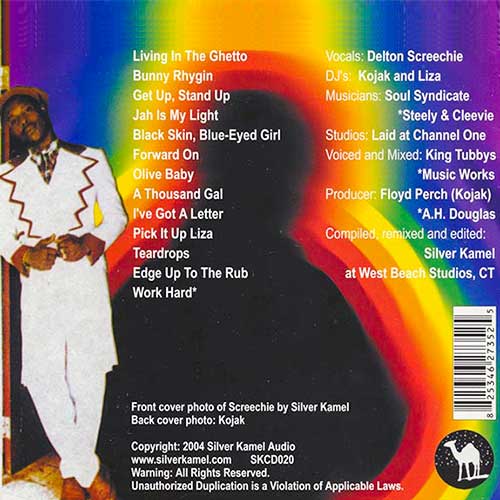 At a very young age, Delton Screechie (born Delton Lowe, March 1959) listened to such artists as Baba Brooks, Don Drummond, and Roland Alphonso. It was the golden era of Ska music, which was followed by Rock Steady. He was encouraged to sing by his school teacher and was in many school concerts. When he left school in 1972 it was early Reggae that dominated the local dance halls. The top sound systems in Jamaica were King Tubbys, Tippertone, King Attorney (later known as Socialist Roots), and Emperor Faith. Like so many Jamaican artists Delton started his musical career deejaying for a sound system, first Stur Gav, then Jammys, Black Scorpio, and Papa Flame. Because of the political violence associated with the sound systems at that time, he gave up deejaying, returned to singing, teaming up with Floyd Anthony Perch aka Kojak for the 1979 recordings Evil Woman and Mix Up.

Artist/producer Kojak’s first stage name was Pretty Boy Floyd. His chanting for the local sound systems earned him a loyal following. One day he trimmed his hair short and changed his stage name to Nigger Kojak, referring to the baldheaded star of the 70s television series Kojak. His debut single, Massacre, proved a local hit and led on to many others, the most notable being the Joe Gibbs produced 1978 dancehall hit Hole In The Bucket (a version over Dennis Brown’s international hit Ain’t That Loving You), combined with Liza. The latter was in fact two Mama Lizas, Beverly Brown and Jacqueline Boland, but whoever Kojak’s female partner was, she was always labeled simply as Liza. The male and female deejay combination was new and gave Kojak the fresh sound that catapulted him into the international spotlight. Hit after hit came for Kojak & Liza, and then he also started to produce local artists for release on his own label. As already mentioned above one of those artists was Delton Screechie. Kojak and Delton produced many hits together including Delton’s first U.K. dancehall hit Olive Baby, which was followed by I’ve Got A Letter, both featured on this great collection of hit tunes. The tracks are recorded at Channel One and voiced and mixed at King Tubbys. Riddims are laid by the outstanding Soul Syndicate Band, except for Work Hard which comes over a digital riddim built by Steely & Clevie.

Delton Screechie, a distinctive singer with a great voice, shows his vocal abilities in a variety of styles, ranging from roots to uptempo lovers. The album opens very strong with Living In The Ghetto, a real killer underpinned by an awesome riddim track, which is followed by a matching deejay cut from Kojak entitled Bunny Rhygin. Also Get Up, Stand Up is a solid effort delivered over the wicked, booming bass line of the Shank-I-Shek riddim. Next drops the wonderful Jah Is My Light, another excellent track across an uptempo riddim that features great horn parts. Over the same riddim comes Black Skin, Blue-Eyed Girl, featuring Kojak & Liza at their very best. We’re treated to the extended version of that song, dubbed up to full effect by King Tubby. Then Delton Screechie returns with two solid tracks : Forward On and the aforementioned Olive Baby. The latter is a fine love song, but it is outmatched by A Thousand Gal, its entertaining deejay version. A thumping bass line can be experienced while listening to I’ve Got A letter and even more, when it comes to its killer version, Pick It Up Liza. The lovers tune Teardrops is a great effort and the same goes for Kojak & Liza’s Edge Up To The Rub. The cd rounds off with the A.H. Douglas produced Work Hard, a firm tune that dates from a later era and thus should not have been included on this set.

Delton Screechie – Get Up Stand Up