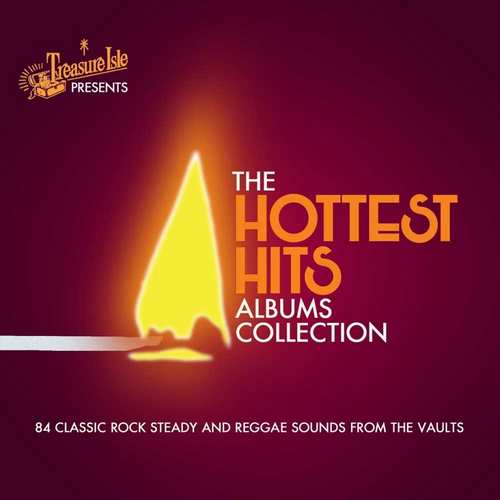 A very popular Jamaican album series when recorded and released from the Treasure Isle studio in Kingston, Jamaica. Each album contained 12 tracks produced by the legendary Duke Reid. This 3CD collection contains an amazing 84 classic Rock Steady and Reggae sounds.

Track 1 : THESE GUYS – The Sensations. This track was written by Duke Reid and is mid-tempo Reggae at its best. Some classy organ solo in the middle and a cool vocal. Good track to start off this collection. Track 3 : LOVING PAUPER – Dobby Dobson. Self-penned number this one from the soulful Mr Dobson. This is a Rock Steady sound on which we have the vocalist helped out by backing vocalists, mid-tempo rhythm track. Track 5 : HEARTACHES – Vic Taylor. The vocalist was a one-time member of Byron Lee’s Dragonaires and on this mid-tempo number he comes over with a classy clear vocal. The rhythm track is uncomplicated and is in a Rock Steady mode. Track 7 : QUEEN MAJESTY – The Techniques. This song was originally recorded by Curtis Mayfield and here we have one of Jamaica’s top outfits giving the listener a cool, slightly faster slice of Rock Steady. Track 9 : I’LL NEVER FALL IN LOVE – The Sensations. Written by Bacharach/David back in the ’60s, this begins with a brassy opening before moving into a mid-tempo number on which all group members combine to come up with a catchy Reggae sound. Track 11 : THINGS YOU SAY YOU LOVE – The Jamaicans. A faster number with laid-back vocals over a straight Reggae rhythm. Track 12 : IT’S RAINING – The Three Tops. Once again written by Duke Reid and released on the original orange Trojan label. Combined vocals and a fast rhythm track. Remember this on one of the first Jamaican albums in my collection, still a favourite from 1967.

Track 13 : GIRL I’VE GOT A DATE – Alton Ellis & The Flames. Co-written by Alton/Reid this is a faster number and pure Rock Steady. Nice instrumental section half-way through and the usual classic vocal from Alton. Track 15 : LOVE IS A TREASURE – Freddie McKay. This is his only contribution to the collection and another on which Duke Reid co-writes with the vocalist. Freddie sounds young on this and the vocal is precise and clear over a straight Reggae rhythm. Track 17 : YOU DON’T NEED ME – The Melodians. Lloyd Brevett gets the witting credits for this and here we have a mid-tempo Rock Steady number. The lead vocal is helped out by the other group members adding up to a classy sound. Track 19 : PERFIDIA – Phyllis Dillon. This is a song that has been covered many times over the years and this Rock Steady version stands up well against them. Phyllis is on top form over a heavier Rock Steady rhythm. One of Phyllis’s best recordings and remains a favourite. Track 21 : TRAVELLING MAN – The Techniques. Nice brass on this by group member Winston Riley and he is helped out by the other group member at times. A more laid-back rhythm than on the previous track. Track 23 : MOONLIGHT LOVER – Joya Landis. Joya was not a prolific recording artist but is remembered for some classy tracks, this is no exception. Moves along swiftly with clear vocal over a cool Rock Steady rhythm. First heard this on Trojan’s ‘Tighten Up’ series of albums. Track 24 : I WISH IT WOULD RAIN – The Techniques. First recorded by The Temptations for Tamla Motown and lends itself to the Reggae genre. Nice trombone playing on the rhythm track with a classy lead vocal helped out by further group members at times.

Track 26 : HAPPY GO LUCKY GIRL – The Paragons. This was written by Holt/Evans/Brevett, three members of the group, and is a mid-tempo slice of classy Rock Steady. Combined vocals on most of the track. Good musicianship on the rhythm track and a toe-tapping sound. Track 28 : AIN’T THAT LOVING YOU – Alton Ellis. Quirky trombone opens this sound from one of Jamaica’s top solo artists. The rhythm track is heavy without being overpowering and has some good brass work.

Track 1 : REMEMBER THAT SUNDAY – Alton Ellis & Phyllis Dillon. A great combination of artists on this fast slice of cool Rock Steady. The two vocals combine well over an uncomplicated rhythm track. Track 3 : LOVE IS NOT A GAMBLE (alternate mix) – The Techniques. This outfit crops up again on a Riley/Ruffin written number that has combined group vocals. Nice pounding rhythm track which has some brass work. Track 5 : BOOM SHAKA LACKA (Alternate Mix) – Hopeton Lewis. This track will be familiar to most Jamaican music fans as it has been classed as a classic track. Written by Hopeton it is a chug-along number. Track 7 : THE LOVE THAT A WOMAN (Alternate Mix) – Phyllis Dillon. This song was written by Andy Badale and first recorded in 1969 on Capital Records. This mid-tempo rendition is the equal of the original and as usual, Philly’s comes over as a classic singer. Some nice brass work on the rhythm track and overall a classic recording. Track 11 : ALI BABA – John Holt. Most Jamaican music fans will have heard this track on one album or another and once heard not forgotten. This was John Holt at his best and before he went commercial later in the ’70s.

Track 12 : WILLOW TREE – Alton Ellis. This slower number has Alton with a high-pitched vocal helped out by a female chorus. This was originally recorded in 1968 and appears on a number of Alton’s vinyl albums and CDs. Track 15 : ANGEL OF THE MORNING – Joya Landis. This song was taken into the UK charts by P P Arnold in 1968 and here we have Joya Landis giving her all and making it her own. Heavy slice of Rock Steady with classy vocal, originally released on the orange Trojan label. Track 17 : TRUE TRUE TRUE – Ken Parker. On this, his only contribution to the collection we have a much underrated Jamaican artist who should have made it in the UK. Ken’s vocal is crisp and clear and we end up with a mid-tempo number on which Ken is helped out by a backing chorus. Track 20 : BABA BOOM – The Jamaicans. Written by two of the group members, this starts off slowly before moving into a mid-tempo slice of classic Rock Steady. The Jamaicans were formed in 1967 and released this to take into the Independent Festival Song contest and ended up winning. This is probably the outfit’s most remembered recording. Track 23 : I’M IN THE MOOD FOR LOVE – The Techniques This is not the Lord Tanamo number but one written by two of the group members and is a catchy number with brass work on the rhythm track.

Track 24 : BLACK BIRD – Rosalyn Sweet & The Paragons. The original song was written by Lennon and McCartney and lends itself well to this Reggae version by little-known Rosalyn Sweet. It comes as a mid-tempo version and the vocal is crisp and clear. Track 26 : ROCK STEADY – Alton Ellis & The Flames. With its title this has to be a true Rock Steady sound and we are not disappointed with heavy bass guitar. Alton gives us his usual high-standard vocal and the recording has become a classic Rock Steady favourite over the years. Track 28 : ONCE A MAN – Justin Hinds & The Dominoes. Prolific recording artist Justin Hinds comes up with a slightly faster number that is written by the performer. He is helped out at times by his backing group on the vocals.

Track 1 : ON THE BEACH – The Paragons. This was written by John Holt who was a member of this outfit from their start. This will be familiar with long-standing Jamaican music fans and has Mr Holt on lead vocal. On this track it comes without the violins mid-way through, it is a class number. Track 3 : I’LL BE LONELY – John & Joya. Here we have John Holt and Joya Landis on a mid-tempo sound on which the vocals are combined. Pleasant and catchy with some nice backing brass at times. Track 6 : YOU HAVE CAUGHT ME – The Melodians. Written by Lloyd Brevett this a slower slice of Rock Steady with a straight backing track. Lovers of The Melodians recordings will have heard this many times. Track 9 : MY BEST GIRL – The Paragons. Again, with many of the outfit’s recordings it is co-written by all group members. It comes as a slower sound with combined group vocals. Track 12 : ONE LIFE TO LIVE – Phyllis Dillon. This song has been recorded by several artists over the years and here we have Phyllis doing a classy Rock Steady version. The backing track is laid-back and the whole sound is catchy and stands up well to any of the other versions.

Track 13 : BREAKING UP – Alton Ellis & The Flames. Alton gives us his usual classy vocal performance on this faster number. He is helped out by his backing group on the vocal at various times throughout. Track 16 : HELP ME MAKE IT THROUGH THE NIGHT – Ken Parker. Written by Kris Kristofferson this song was taken into the UK charts by John Holt in 1973. Here we have a less commercial version that swings along with Ken Parker on top form. Track 19 : OUT DE LIGHT – Joya Landis. This was written by Duke Reid and comes with some classic brass work. Joya has fun on this with the vocals and it ends up as a catchy hard-to-forget number. Track 22 : IF I COULD RULE THE WORLD – Alton Ellis. Naturally, this is written by Alton and he is credited as being without his usual backing outfit The Flames. Mid-tempo number on which Alton sounds young, the rhythm track is uncomplicated. Track 24 : MERCY MERCY MERCY – The Paragons. Originally recorded by Cannonball Aderley as a Jazz number in 1966. On this, The Paragons are somewhat laid-back and the vocals are taken on by all group members. Mid-tempo straight rhythm track and the last track on the original vinyl album.

Track 25 : BABY LOVE – The Sensations. Even though this has the same writers who wrote a same titled song for The Supremes it actually does not come over as the same song. This mid-tempo sound has some fine brass work on the rhythm track, the performers were better known as a backing outfit. Track 26 : BOYS AND GIRLS REGGAE – Phyllis Dillon. Co-written by producer Duke Reid and singer Ken Parker this is a fast Reggae sound that is very like Brown Girl In The Ring by Boney M. It is a catchy, fun sound and with Phyllis giving her all on the vocal we end up with a fine track. Track 28 : DRINK MILK – Justin Hinds & The Dominoes. Written by Justin this is a chug-along slice of groovy Reggae. Nothing special about the backing track but an overall good sound. This is a good track to finish off this collection.

The Sensations – Those Guys

The Paragons – On The Beach

Conclusion To sum up this 3CD collection, the majority if not all the tracks can be found on various collections. Having said this it is good to have them in one place and at £16 99p it is really good value, the enclosed booklet is good also.