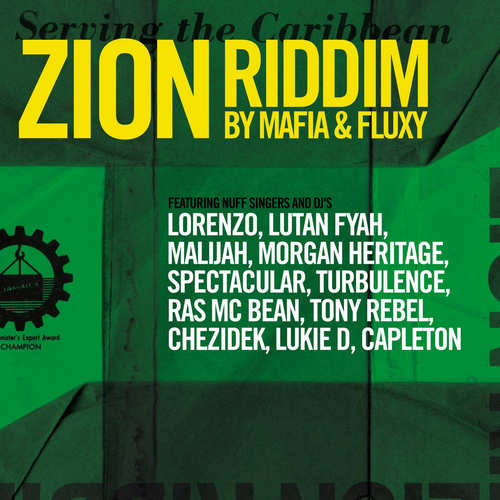 Single 1:
A.Capleton – Throw Us Down
B. Mafia & Fluxy – Zion Riddim

The 2004 released Zion Riddim is the first riddim project produced by Irie Ites in collaboration with well-known UK producers and riddim section Mafia & Fluxy. This project was a great success in France as well as internationally. Now, Irie Ites has reissued the riddim with new mixes and an unreleased track by Suga Roy & Conrad Crystal titled Beat Kette Drum.

At the time of its original release, we more than once wondered, what the use was of featuring 20 cuts or more of a riddim? Usually it’s boring to listen to such one riddim sets, not least because it’s almost impossible to produce such an amount of cuts without having fillers amongst them. Above all you need a good riddim, one that has the quality to keep you involved till the very end and leaves one longing for more. This Mafia & Fluxy built Zion Riddim for French sound system and label ‘Irie Ites’ is a good one and comes in at 12 tracks (including the version).

From start to finish you’re treated to modern roots music with conscious lyrics from established artists and promising newcomers. The album opener is a very strong tune delivered by Turbulence, who hails King Selassie I in the powerful Rastafari Livity. King Lorenzo, one of the lesser known artists featured here, utilizesa vocal style reminiscent of Jahmali, and shows good potential with You Always Deliver, another tune in which Jah is praised. Why People features reggae veteran Tony Rebel chanting in his typical style. A strong effort with fine lyrical content in which he asks questions about alot of things in life. One of the best tracks comes from Morgan Heritage & Ras Mac Bean. Lion Is King is a very good tune the Guyanese singjay delivers in combination with the popular vocal group. This tune was also included on Ras Mac Bean’s 2004 debut album Pack Up And Leave and actually kickstarted this ‘version excursion’.

Ras Mac Bean has also recorded a solo piece for the riddim entitled Dragon, which matches his combination tune. Capleton hardly fails to make a serious impression when he has to ride a roots riddim and Throw Us Down is no exception as it is an above par tune worth of hearing. A pleasant surprise is the Lukie D track Laugh, which shows that this too often overlooked fine singer is also able to impress with a conscious reggae tune. Spectacular’s Rasta and Chezidek’s Better Not are both decent efforts, followed by Lutan Fyah’s truly excellent Intoxicated, a meaningful song with rich lyrics that touches your very soul. Malijah’s Cease All War is a nice piece, but in the end turns out to benefit from the riddim. The roots juggling is rounded off in fine style with the clean version of the Zion Riddim.

Conclusion Even though it's a reissue from 2004, it's still worth listening to this one riddim project after all those years.