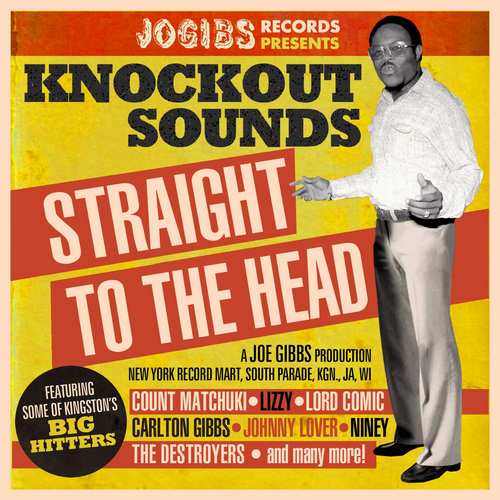 This CD collection contains 27 tracks from the Joe Gibbs studio through 1970. Highlights include hits and misses by pioneering Dj’s including sound system veterans, count Matchuki and Lord Comic along with newcomers, Johnny Lover, Lizzy and Carlton Caly’ Gibbs. We now take a look at a selection of these.

Track 1 : STRAIGHT FROM THE HEAD – Johnny Lover. To start this collection we have DJ Johnny Lover naturally giving us a talk-over sound. This is on the slower side and comes with a straight Reggae rhythm. Track 3 : HONEY NO MONEY – Niney & Slim Smith. Here we have the legendary Slim on another spoken rather than sung sound on which both vocalists take their turn. Original UK release Pressure Beat. Track 5 : NEWS FLASH VERSION – The Destroyers. This is on the borderline to being a Dub sound. To be fair this is nothing special and a version of the ‘New Flash’ sound that appears on the previous track. Track 7 ; NINEY SPECIAL – Niney & The Destroyers. So many of these tracks come with recognisable rhythm tracks, this is no exception. Plenty of bass guitar and some organ. Original UK release Amalgamated. Track 10 : PUSSY CATCH A FIRE – The Two Soul Brothers. Make what you will of the title, this has a spoken intro before going into a mid-tempo sound from an outfit that will be new to most listeners. A large portion of this has a spoken vocal with a catchy rhythm track. Track 13 : RED RED WINE – The Immortals. This is not the Neil Diamond song covered by UB40 but a fast-moving slice of catchy Reggae. The writer is unknown, original UK release Amalgamated. Track 15 : OH LORD – Winston Wright & The Joe Gibbs All Stars. Slower slice of organ dominated Reggae and co-written by Wright/Gibson. This comes with the occasional vocal and a punchy rhythm. As always Winston’s organ playing is top-notch and we end up with a catchy recording. No original UK release.

Track 17 : UNITED WE STAND – Cynthia Richards & Al Brown. Both of these artists should be familiar with Jamaican music fans, Al Brown fronted Skin, Flesh & Bones. This song was a UK hit for Brotherhood Of Man in 1970 and it lends itself well to this mid-tempo version and has another punchy rhythm track. Original UK release Pressure Beat. Track 19 : AQUARIUS – Lizzy & Cornel Campbell. This starts off as though we are going to get a cover of The 5th Dimension UK hit but then moves into something different. This turns out to be mainly a talk-over sound with Lizzy coming in at times with a top-notch vocal. No original UK release. Track 21 : GHOST CAPTURER – The Joe Gibbs All Stars. This song was originally written by the legendary Bob Marley and is a slow slice of class Reggae. It comes as an instrumental by a group of musicians who recorded as the producers All Stars. Original UK release Amalgamated. Track 24 : STILL WATERS RUN DEEP aka JOY STICK – Lizzy. This is a talk-over version of The Four Tops 1970 UK hit. This doesn’t sound much like the original but is a catchy sound. Mid-tempo and gets the feet tapping. No original UK release. Track 25 : ECHO (head cup) – Johnny Lover & Charley Ace. This sound has a spoken vocal as you would expect from two of Jamaica’s top talk-over artists/DJ’s. This has a slow rhythm track with heavy bass and is similar to the U Roy releases. No original UK release. Track 27 : NEVADA JOE – Johnny Lover & The Destroyers. This has a ghostly intro before going into a mid-tempo Reggae instrumental. Good track to finish off this collection. Original UK release Amalgamated.

Johnny Lover – Straight To The Head

Lord Comic – Jack Of My Trade

Conclusion To sum up this CD collection, it may not be a favourite of all Jamaican music fans but it does give one an in depth look at the production work of Joe Gibbs. With nine tracks new to cd and with a price tag of £10 95p it has a place in any Jamaican music collection.