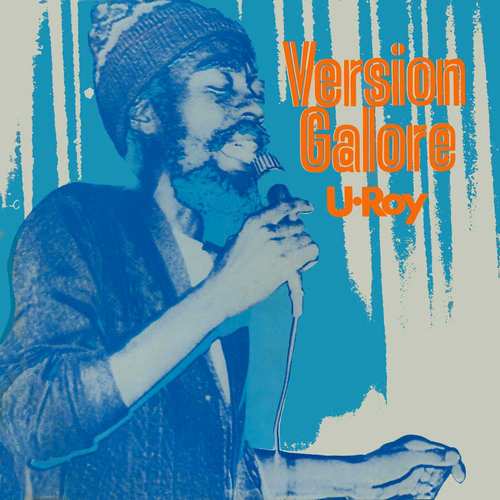 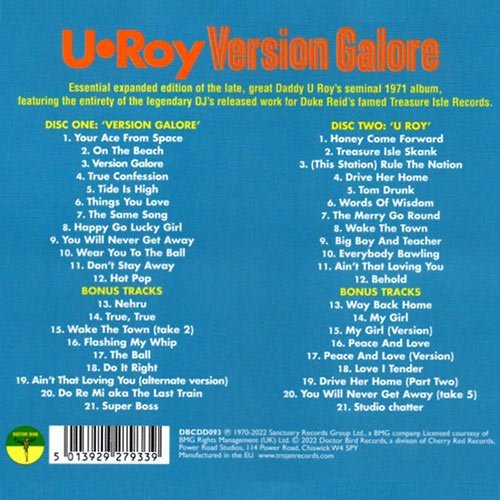 This 2 CD collection features two original albums by U Roy real name Ewart Beckford from 1971, both released on the Trojan label in the UK. These were both recorded at the legendary Treasure Isle Studio for Duke Reid.

This includes 12 talk-over’s from the original album followed by 9 bonus tracks of which we take a look at a selection. Track 1: YOUR ACE FROM SPACE. This may well be known by staunch Jamaican music fans and is a fast-moving number on which U Roy is at his best. Track 2: ON THE BEACH. This talk-over has the original rhythm track recorded by The Paragons. It again is a fast-moving sound and the song lends itself well to this style. Track 3: VERSION GALORE. Giving its title to the original album, it may be another track that is familiar to the listener as it is a talk-over of The Melodians You Have Caught Me. U Roy is in fine voice on the vocal and it makes for an all-round pleasing version. Track 4: TRUE CONFESSION. On this, U Roy is joined by The Silvertones and together they come up with a first-class Ska sound. It is a catchy sound that is hard not to dance along to. Track 5: TIDE IS HIGH. Again we have another sound originally released by The Paragons that will be familiar to most listeners. U Roy does his talk-over to great effect and we end up with another first-class recording, Track 6: THINGS YOU LOVE. On this, we hear U Roy along with The Jamaicans. This is mid-tempo and lends itself well to the talk-over making it one of the best original album tracks. Track 7: THE SAME SONG. Another mid-tempo sound on a well-loved original recording by The Paragons. U Roy once again adds a well-balanced talk-over, adding nicely to the overall make-up. Track 8: HAPPY GO LUCKY GIRL. The Paragons recorded the original and U Roy comes along with a talk-over that really contributes to this faster sound. Track 9: YOU WILL NEVER GO AWAY aka ROCK AWAY. If you know the original Reggae recording by The Melodians you may find this a surprise choice for a talk-over but it works well. Track 10: WEAR YOU TO THE BALL. So many of The Paragons recordings lend themselves to the talk-over genre and this is no exception. A faster track and top-notch. Track 11: DON’T STAY AWAY. Here we have the great Phyllis Dillon on the original sound with U Roy adding a polished talk-over. It takes nothing away from the original. Track 12: HOT POP. Supplying the rhythm track on this we have Tommy McCook & The Supersonics. U Roy gives another fine talk-over and it’s the final track from the original vinyl album.

There are 9 bonus tracks on this disc, we take a look at a selection of these. Track 13: NEHRU – Winston Wright with Tommy McCook & The Supersonics. This is an instrumental version of The Melodians’ You Have Caught Me with the usual tenor sax playing from Mr McCook and Winston on organ as one would expect. Original UK release Duke Reid. Track 15: WAKE THE TOWN – U Roy & The Paragons. This is a fast talk-over of The Paragons’ Girl I’ve Got A Date rhythm track, another classic talk-over. Not originally released in UK. Track 18: DO IT RIGHT – U Roy & The Three Tops. The original is given the talk-over treatment with a fast-moving rhythm track. Original UK release Duke Reid. Track 21: SUPER BOSS – The Tommy McCook All Stars. This is an instrumental on which we hear the organ, maybe it is Winston Wright. If you know the original by The Melodians then this will come as a good sound. This finishes off the tracks on disc 1. Not originally released in UK.

‘U ROY’ is the second original album on this collection and was released in 1971 on Trojan Records, Attack label, and again in 1993. These recordings change the sound of Reggae and made U Roy the world’s first DJ superstar.

There are 9 of these on this disc and not all of them are talk-over’s. We now take a look at a selection of these. Track 13: WAY BACK HOME – U Roy & Tommy McCook. This is a version of the last track from the original album and nothing else. Original UK release Treasure Isle. Track 15: MY GIRL (Version) – The Techniques. This is nothing more than a version of the original Jamaican hit. This is a toe-tapping sound and the writing credits go to group member Winston Riley. No original UK release. Track 18: LOVE I TENDER – U Roy & Tommy McCook & The Supersonics. This fast-moving number shows off the talk-over genre at its best with U Roy flat-out. The rhythm track is repetitive but it is a good track. Original UK release Duke. Track 20: YOU WILL NEVER GET AWAY – U Roy & The Melodians. The listener may or may not know the original by The Melodians but either way, it lends itself well to being put with a talk-over. This is fast-moving and stylish and one of the best tracks overall. Not originally released. Track 21: STUDIO CHATTER – U Roy & Byron Smith. The writing credits on this go to both vocalists and here we have a combined spoken number. On this, we hear a very short extract from the previous track. This is a short track lasting only 1min 19 sec’s and as the title is very apt for the content, this concludes disc 2. Not originally released.

Coming out of Cherry Red Records we would expect a fine 2 CD collection and this is what the listener gets. It will not be every Jamaican music fan’s favourite genre but one has to say that overall it is worthy of inclusion into a Jamaican music collection. At £11 99p it is very good value and comes with the usual informative booklet.

U Roy & The Melodians – Version Galore

U Roy & Alton Ellis – Ain’t That Loving You

Conclusion It will not be every Jamaican music fan's favourite genre but one has to say that overall it is worthy of inclusion into a Jamaican music collection.