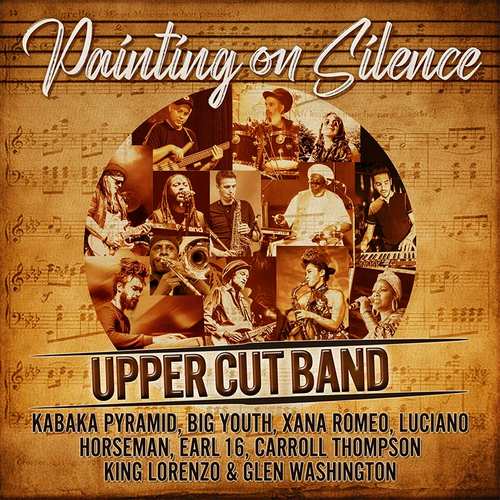 Fresh like a loaf of bread out of the reggae bakery comes spiritual nourishment for those hungry for truth!

Amidst the turbulence of the world, chaos, confusion, division, and doubt , Painting On Silence couldn’t have arrived at a better time. Recorded pre and post Lockdown by Nick Manasseh at The Yard, London. The specter of Covid hangs over this album but in no way darkens it. Rather, look at it like a musical document that colours our landscape with important information, shedding light on hidden depths and current world affairs.

A RINGSIDE SEAT AWAITS YOU…

Our hosts for the battle are the Upper Cut Band on whom I would bestow the accolade of being the UK’s No.1 roots reggae group. Hard to beat their knowledge of reggae music. It’s traditional yet forward-thinking, dub-infused roots music for the future, played with virtuosity and velocity, delivering a knockout blow to any competition. In the red, gold, and green corner – friends and relations, kindred spirits, the cream of the crop of UK/JA vocal talent grace the mic with their presence. No doubt a plethora of vocalists would have jumped at the chance for a shot at the title and that Upper Cut could oblige with 10 one rhythm albums! – but no, it’s quality, not quantity that distinguishes this fight from the rest.

ARE YOU READY TO RUMBLE?!

Can’t Bowl Me Over opens with majestic heralding horns and Glen Washington’s velvet voice, intoning ‘goodness and mercy rules – the calm that comes after the storm’ before tumbling into a deep rolling juggernaut of a rhythm immediately showcasing the strength of Upper Cut Band and the power of their delivery. It provides a bed for Glen to produce – what I consider to be – one of his greatest songs to date. A call to stand firm in the face of adversity. It opens floodgates to redemption, forgiveness, and hope. James Sheppard’s Spanish guitar work decorates the track with a beautiful tapestry that flits among the words. The bridge in the middle of the chorus is genius, a jab on point to raise the refrain – goodness and mercy rules. Ding! Ding! No need for a loud alarm – be humble and cool.

As you hold your corner after this opening round, it could be the wings of angels that comfort you?…
…or it could be Kabaka Pyramid stepping up to mash you up in the second round! You can dance around the canvass and hold onto the ropes as much as you like but there’s no getting away from the square off in Light It Up. Kabaka, a Binghi drum, and the band chant down the walls of spiritual wickedness in high and low places – Governments, institutions, procrastinators, and part-timers. Everything the Pyramid touches turns the heat up on Babylon, and this is no exception. Lights out – for some.

Recovering? Something to soothe the mind, body, and soul is what Xana Romeo brings to those who haven’t lost the fight. She sings a version of her father Max Romeo’s hit Selassie I Forever over an original rhythm by Upper Cut. A song of reverence, courage, and self-determination. The duel keys of Calvin Bennion and Cyrus Richards elevate the song to higher heights, bathing it in soft bubbles and soaring strings. Manasseh’s touch in the mix on this is sublime; it sparkles like the stars.

Will you be seeing them after the revelations that Luciano brings? A heavy hitter with a heart of gold – he gives it to you straight on Bear Jah Fruit – serious times in the world arena. Billionaires and the elite carry on in their folly financing space flights and wars, fleecing the pandemic and killing the poor. The gravity of the message is matched by the music – James’s pensive lead guitar lines emphasis the hook. A reminder to keep your head up and keep it real whilst all around are losing theirs.

Entering the ring with a Wake Up Call is legend of the dancehall – Big Youth. The Youth has remained at the top for longer than any other DJ. Here he is on fine form, shaking it up in his own inimitable style, looking out for everyone as he boxes you clever – accompanied by the delightful harmonies of Lyn Gerald. When Big Youth calls for peace, love, and unity – pay attention. Take heed of the rallying cry to all warriors of every nation to rise up! Don’t stumble or fall – it’s a world title fight after all, and we need to win.

A ‘Supernatural’ tag-team event with System Under Pressure is up next, featuring Carol Thompson and Earl 16 – a double bill to thrill! The Queen of lovers rock casts her sweet voice and observations over the sour effects of these past couple of years with faith in a miracle to pull us through – the horns herald the hope. Then, Manasseh tweaks the controls and plunges the rhythm into a tight drum and bass workout. Bob Pierce and Ross Erlam are the engine room of Upper Cut – their chemistry, vitality, and quality are testament to the 25+ years they’ve been playing together. As Nick dubs the ether with a flick of his wrist, Earl 16 steps up and delivers a phenomenal vocal. His cut brought a tear to my eye – a plea for the longevity of our planet and our survival as a species.

Horseman is a mainstay in the Upper Cut stable. A champion of the track, more often than not leading from the front. Anyone who sees the band ‘live’ stands a chance of catching up with him. A singer who motivates and heartens the listener, dispensing good advice, and warning, in earnest tones akin to the great Chaka Demus. Love And Live expands on a familiar theme in reggae circles ‘Love the life you live – live the life you love.’ The dexterous lyrical wordplay weaves a web of good fortune for the bold; and a sticky end for the fool. The Horse jumps between Marcin and James’s guitars – chopping out the message – picking out the lines. An intermission of sorts – although you could be forgiven for thinking that Trading Blows was another round of pumping beats and fire! It’s a clever play on words, an Upper Cut instrumental that gently introduces a joyful bed for the Horn section to spar over – Adam Webb and Jake Jacas – they team up with Sarah Tobias on this track. Huffing and puffing away to create a wonderful trade-off that floats like a butterfly, and stings only when it finishes. A highlight of the album in its own way.

Rise or fall? It’s now or never – no time for lightweights. The penultimate round features King Lorenzo with My Time. A truly inspirational, uplifting song of self-confidence and inner strength. Life is short, you only get one chance, be the best you can be. It’s like a roots reggae Eminem – Lose yourself! Lorenzo rises to the occasion, takes it on the chin, and never throws in the towel. Upper Cut plays straight from the shoulder; effortlessly carrying home the King to victory.

In the finale, the band dispatches a sonorous reggae ballad on which Luciano returns with One Of A Kind giving praise and comfort in equal measure. A memento – behind every good man is a great woman. The messenger croons heartfelt gratitude to his Queen and confidante, for strength and support through good times and bad. These words instill in one’s own thoughts and feelings – a deeper attachment to the love of ‘our’ lives. A charming end to a wonderful album.

It’s been a long time since I heard one like this, that stopped me in my tracks, picked me up, filled me with joy, and brushed off the dust in me with an epiphany. Painting On Silence does just that, and more. The band is the palette – the artists the brush – we, the canvass on which the whole picture is painted. Colouring the space between our ears with vibrations and a consciousness that is positively inspiring and life-affirming. True sounds of the underground, self-financed and released.

One Of A Kind

Conclusion This is an essential album for any self-respecting reggae fan to own.