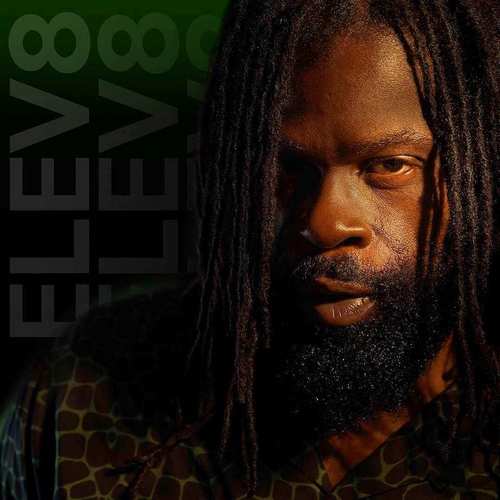 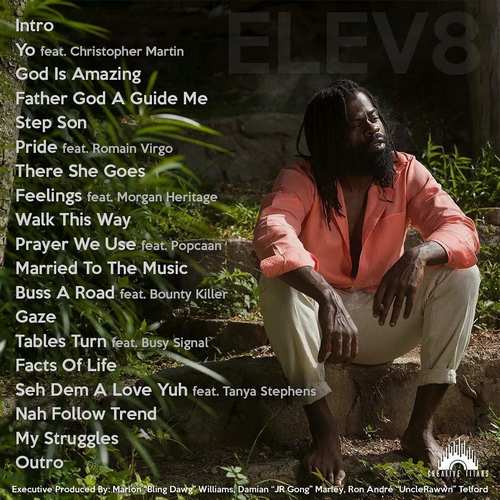 Although being in the music business for more than two decades, it took Kingston-born Marlon Ricardo Williams who’s better known as the artist Bling Dawg an incredibly long time to come up with his much-anticipated debut album entitled Elev8.

During his childhood, Bling Dawg spent time between Portland, Jamaica, and Miami FL. His break came when he was in Miami where he met two Jamaican deejays, Dugsy Ranks and Biko Bailey, who along with Bounty Killer recruited him to be a part of Shocking Vibes Productions. It enabled him to work with and write for dancehall’s best acts. His first stage name of Ricky Rudie was one he had for a long time prior to changing it to Bling Dawg. in 2003, Bounty Killer founded the dancehall collective known as The Alliance with the Killer himself alongside Bling Dawg, Busy Signal, Wayne Marshall being regarded as The Alliance’s ‘pure four’ members. Bling Dawg enjoyed Jamaican chart success with tunes such as Say My Name, Perfect Lady, Floss Like We Do, Johnny, Dignitary, Phone Call feat. Vybz Kartel, Father And Son feat. Captain Barkey, Shotta Ting, and Aji Bounce. Around 2016/2017, he took a three-and-a-half-year sabbatical and it wasn’t until 2020 that he returned on the scene with the single God Is Amazing, the lead track from his now released debut album.

Just like his former fellow member of The Alliance, Busy Signal, and Assassin aka Agent Sasco did in the past with their respective albums Reggae Music Again (2012) and Theory Of Reggaetivity (2016), Bling Dawg has also chosen to stay away from a dancehall fueled collection of tunes and instead concentrate on recording a reggae-oriented album. If you look at the list of tunes on this about sixty-two minutes long album, you’ll see nineteen tracks of which two of them are the Intro and Outro, with the former being forty-eight seconds and the latter being just five – so Elev8 really only has seventeen actual songs. To include such a large number of songs raises the question of what it does with the quality of the album. Can it be maintained throughout or is it inevitable that it decreases at some point? Luckily it doesn’t and even though there are a few tunes that don’t come near the top of the class of tunes on Elev8, they’re still worth listening to.

Apart from Bling Dawg’s solo pieces, Elev8 contains big named collabs with Christopher Martin, Morgan Heritage, Popcaan, Busy Signal, Bounty Killer, Romain Virgo, and Tanya Stephens, which surely adds to the appeal of this album as it brings in some variety. The best of these collabs are the two previously released singles with reggae crooners Christopher Martin and Romain Virgo. The former is present on the Damian ‘Jr Gong’ Marley produced slow-paced scorcher Yo!, which is now featured in the Jamaican charts, while the latter shines on the old-skool vibed Pride. Another highlight is the return of The Alliance. First, there’s Bling Dawg’s mentor Bounty Killer who is prominently featured in Buss A Road and then there’s Busy Signal who convincingly takes care of his part in Tables Turn. Don’t overlook the captivating Seh Dem A Love Yuh either as this track turns out to be an outstanding combination tune with the vocal delivery of Bling Dawg and Tanya Stephens being a perfect match.

And now, let’s take a closer look at the solo pieces. First drops the 2020 gospel-flavoured hit single God Is Amazing which is a really beautiful effort and so is the same themed Father God A Guide Me. A relick of Jackie Mittoo & Soul Vendors’ much versioned Darker Shade Of Black riddim underpins the solid Step Son, while the lovers tune There She Goes is just nice to hear. The message tune Walk This Way comes with a one-drop reggae sound and is one reggae heads will enjoy to the fullest. Very interesting are the lyrics of Married To The Music, which features a sample of Barrington Levy’s signature riff ‘ooooweeeeoo’. The huge cautionary tune Gaze over a one-drop riddim brings pure reggae vibes and will surely please fans of modern reggae. The same goes for Facts Of Life, although this gorgeous tune is backed by a different vibed but very appealing riddim. Nah Follow Trend, produced by Good Good Productions, treats us to the familiar sound of nowadays dancehall music, before the downright stellar Struggles drops in to cheer up the probably disappointed reggae fan.

Despite the fact that a few songs leave something to be desired, Bling Dawg’s debut album has been definitely worth the long wait.

Conclusion Bling Dawg's debut album has been definitely worth the long wait.