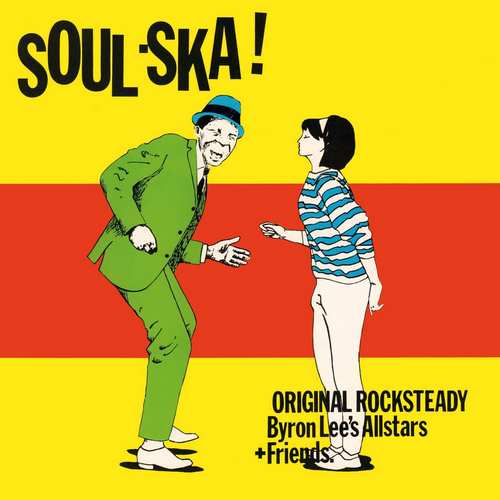 The original album was first released in 1980 and is now re-released on vinyl and CD formats, it appears on the Burning Sounds label. All the tracks are performed by Byron Lee’s Allstars who come with Ken Lazarus, Jo Jo Bennett, Keith Lynn, Herbert Lee, and Cecil Barker. The tracks were originally recorded in the mid-’60s and produced by one of Jamaica’s first producers of Ska, Alty East.

Track 1: SOUL-SKA. This track is exactly that a soulful Ska number that has a chugg-along rhythm track. This is naturally the album title and comes with various artists on the vocal. Track 2: GIRL I’VE GOT A DATE. The version you may remember was recorded by Alton Ellis back in 1966. This mid-tempo number again comes with a vocal that has a chorus helping out at various times. The lead vocal is soulful and piano is a feature of the backing. Track 3: SHOOBE DOOBE DOO. This is another soulful slice of faster what is more Reggae than Ska and has a smooth rhythm track. Track 4: ON THE BEACH. The listener may well remember The Paragons recording, this is equally memorable. Clear vocals and a chorus of backing vocalists throughout. Track 5: BEND DOWN LOW. Originally written and recorded by Bob Marley & The Wailers, this rendition is not as raw. Again the vocal is spot-on and it ends up as a cool recording. Track 6: C.C. RIDER. This song has been recorded by various artists over many years. This is a swing-along version and surprisingly it lends itself to the genre.

Track 1: MUSICAL PRESSURE. This number starts side 2 of the original vinyl album and comes as a fast-moving quality Ska sound. The trombone playing on the rhythm track is rather infectious. Overall a classy, catchy number. Track 2: ROCKSTEADY. Another number that has been recorded by various artists over the years, both in the Jamaican and pop genres, Aretha Franklin to name one. The vocal is reminiscent of a U Roy talk-over and comes with a rhythm track on which the trombone playing is standout. Track 3: GIMME SOME. Not really much to say about this other than it being a fast repetitive sound. Again a chorus of backing singers lends a hand throughout, singing the title. Gets the feet tapping. Track 4: GOT TO GET YOU OUT OF MY LIFE. This comes as a fast-moving sound with a standard Ska rhythm track. The vocal probably by Ken Lazarus again is clear and the overall sound is catchy and a good foot-tapper. Track 5: CAN YOU HEAR ME. The vocalists ask’s the question and a chorus gives the answer. More fast Ska and a straight rhythm track, pleasant overall recording. Track 6: WAITING FOR THE TRAIN. Finishing the tracks from the original album we have a mid-tempo soulful sound. Cecil Barker, a member of Byron Lee’s All Stars recorded this song in Jamaica on the Ultra label in Jamaica and was produced by Alty East. This is a punchy number with a clear classic vocal, probably Ken Lazarus again. The overall sound gets the feet tapping.

To sum up this album, if you have Byron Lee in your music collection you will know what to expect, top-notch musicianship along with classy vocals from a selection of Jamaica’s top artists. This album re-issue comes with exactly that and comes in red vinyl via Secret Records. Byron Lee was born in 1935 and left this world in 2008, he will always be remembered via a vast number of his recordings and productions over several decades. This is also available in the CD format, LP (red vinyl) £14 99p and CD £8 75p. It is good to have albums re-released and gives Jamaican music fans the chance to catch up on past recordings.

Conclusion It is good to have albums like "Soul-Ska!" re-released as it gives Jamaican music fans the chance to catch up on past recordings.