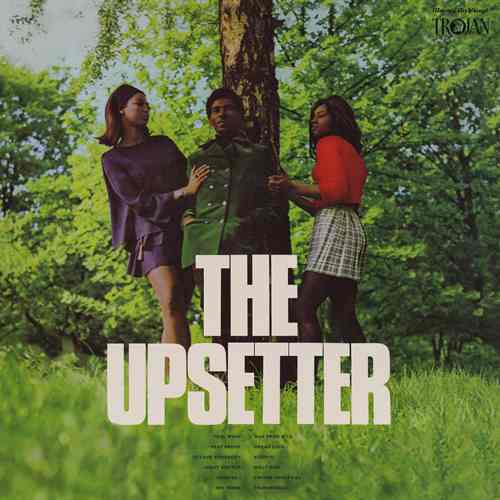 Rainford Hugh Perry, better known as Lee ‘Scratch’ Perry, was one of the most important and influential figures in the history of Jamaican popular music. In various roles, such as engineer, producer, songwriter, entertainer, and artist, blessed with limitless creativity, sometimes bordering on insanity, he contributed to the development of Jamaican music impressively. He’s responsible for the innovative work of Bob Marley & The Wailers and with his studio band the Upsetters he released just over 100 singles between 1969 and 1974 by artists such as Dave Barker, Dennis Alcapone, The Stingers, Neville Hinds, Leo Graham, Big Youth, Junior Byles, U Roy, Dillinger, and many more.

To have more control over his productions Perry opened his own studio, the Black Ark, in his back yard at Washington Gardens, Kingston, in 1974. With a rudimentary set-up and basic equipment, Lee Perry found himself building top-notch productions, known for their creative production and recording techniques. Throughout the 1970s, countless quality productions appeared, with big names such as The Congos, Junior Byles, Jah Lloyd, Max Romeo, George Faith to name but a few. At the end of the 1970s, he burned the studio to the ground. This event, preceded by increasingly bizarre and erratic behavior, ended an era of creativity and production highlights. In the 1980’s he kept a low profile, while the world re-discovered the sheer quality and brilliance of his music. The 1990s was a prolific period, collaborating with a diversity of musicians and producers. Although already in his 80s, he kept recording and touring all over the globe. On August 29, 2021, he passed away, aged 85.

The album is in fact a collection of swinging instrumental tracks played by Perry’s backing band, the first version of The Upsetters. In the late 1960s, early 1970s the Upsetters, formerly known as The Hippy Boys and Gladdy’s All Stars, consisted of the Barrett brothers on drum and bass, Alva ‘Reggie’ Lewis and Ronnie Williams on guitar, and Glen Adams & Winston on the keyboards. Being Perry’s house band they were responsible for the backing of a cartload of tunes.

Besides these dance-provoking instrumentals, there are three vocal tunes on the album. The Muskyteers are probably better known as The Silvertones, they contribute with the modest hit Kiddy-O, their rendition of one of Brook Benton’s hits. Then there are two tracks from Busty Brown, real name Clive Smith. He started working with Lee Perry in 1968, resulting in a series of fine singles. To Love Somebody, his version of The Bee Gee’s 1967 pop hit, is one of his finest performances for Lee Perry, whilst his Crying About You is a tear-jerking version of Clarence Carter’s 1968 soul hit I Can’t See Myself (Crying About You).

The LP opens with Tidal Wave, the uptempo instrumental version of David Isaacs’ tune He’ll Have To Go. The catchy instrumental Night Doctor, featuring Ansel Collins’ livid organ scales, is the first recording on which drummer Sly Dunbar performed. The closing track, Thunderball is on the same riddim, but without Ansel’s organ. Soulful I is the moody instrumental take of the heartfelt lovers’ tune by David Isaacs, Since You Are Gone. Man From M.I.5, the domestic security service of the United Kingdom, was the instrumental version of The West Indians song Oh Lord. This track features Lee Perry’s voice in the intro, heavily embedded in echo effects. Also, check out the interaction between the organ riffs and the guitar licks! Singer Carl Dawkins had a hit with his interpretation of the Otis Redding tune Hard To Handle. The Upsetters’ version of that song can be found here, called Heat Proof.